With France out of the way, Turkey can deal with Iran’s nuclear program 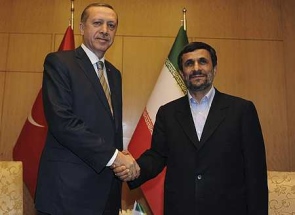 Israel, Turkey can take a lesson from the way Paris and Ankara returned to normal after a French attempt to make the denial of the Armenian genocide illegal threatened the longtime relationship.

After the storm of the “Armenian genocide bill” rattled Turkish-French ties to the point of crisis, both nations could breathe a sigh of relief on Wednesday. France’s Constitutional Council struck down the bill, saying that it was ran counter to the country’s constitution, to 1789’s the Rights of Man and of the Citizen and 1879’s Act of the Freedom of the Press. The Constitutional Council did so, in the words of the eminent pundit Mehmet Ali Birand, to prove that “France is France,” and mainly to take France off the tree Turkey placed it on.

The aforementioned bill aimed to sentence anyone who denied the Armenian genocide to up to one year in prison, along with a fine of 45,000 Euros. When it was passed both in the House of Representatives and the Senate, Turkey saw red. It sanctioned French warships and jets that wished to use its ports and airports, chilled its diplomatic relations with France, and it seemed that the two countries were headed on a full-on collision course.

“France is restricting free speech,” Turkish Prime Minister Tayyip Recep Erdogan said, while the mayor of Ankara swore to change the name of the capital’s Paris St. to “Algeria St.,” to commemorate the Algerians who were killed during the French occupation of their country.

But both countries saw that the tree they climbed on was too high, to the point that it threatened not only both economies, but their essential strategic relationship. On both sides, a lobbying campaign ensued, advanced by industrial groups to remove the threat of boycott, lower the critical tone and return to normal.

The bill, then, was taken down, and even though French President Nikola Sarkozy promised his country’s largest Armenian community – the votes of whom he’ll need in the coming elections – that he will draft a new law, it is nonetheless clear that the affair is over.

France and Turkey came to understand what Israel and Turkey should have understood long ago: even prestige and honor can be reconciled if you don’t argue yourself into a dead end. However, the end of the crisis means that Turkey can afford time to its mediating activities, something it has been engaged in full on. It aspires to host talks on Iran’s nuclear program in April, and for that it needs Iranian consent and that of the five permanent United Nations Security Council members along with Germany.

In principle, Iran has already voiced its approval to hold a dialogue with the West in Istanbul, but the Western nations first want to find out what is it that they’ll be discussing. For that reason, Erdogan invited himself to a Tehran visit during the last week of March in order to reach the kind of agreements that would make the dialogue possible. According to Turkish sources, Erdogan will tell Iranian President Mahmoud Ahmadinejad that time is of the essence for “we understand that the Israeli Spring is coming, and with it the possibility of an attack on Iran.”

But even before the meeting in Tehran, Turkey will have an opportunity to exchange ideas with Iran when the foreign ministers of Turkey, Iran, and Azerbaijan will meet next Wednesday in what is being defined a routine meeting geared at “promoting regional peace and security.”

It will also serve as another opportunity for Iran to scold Azerbaijan for its $1.6 billion arms deal with Israel. Following that transaction, the Azeri envoy in Tehran was summoned to the Iranian Foreign Ministry, where explanations were demanded and warnings were issued against the possibility that the next door neighbor would serve as a “terror base against Iran.”

The Azeri envoy explained that the deal was not meant to threaten any state but “to liberate Azerbaijan’s occupied territory,” referring to Nagorno-Karabakh, which was taken by Armenia during their war in the 1990s. In that way, an occupying country aides an occupied one, earning quite a bit of cash along the way.