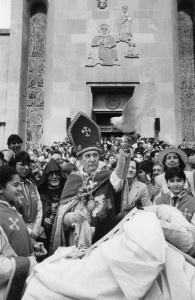 Archbishop Torkom Manoogian, the longtime leader of the Armenian orthodox church in the United States and a savvy communicator who used his pulpit in New York to broaden public awareness of the Armenian genocide, died on Oct. 12 in Jerusalem. He was 93.

He had been hospitalized since January with cardiac problems, church officials said in announcing his death.

From 1966 to 1990, Archbishop Manoogian was primate of the Eastern Diocese of the Armenian Church in America, the larger of two dioceses in this country, where most of about 700,000 church members live. (The Western Diocese comprises Arizona and California.)

A skilled fund-raiser, the archbishop led the final phases of construction of St. Vartan’s Cathedral, the first Armenian cathedral in North America. A work in progress on the East Side of Manhattan (Second Avenue at 34th Street) since the 1950s, the cathedral, with a gilded 120-foot-tall dome, was consecrated in 1968 in a ceremony attended by the city’s civic and religious leaders, including Mayor John V. Lindsay.

In April 1975, to mark the 60th anniversary of the start of the Armenian blood bath, Archbishop Manoogian sponsored a series of public events, including one at Madison Square Garden, that brought new attention to the mass deaths and the Turkish government’s continued refusal to accept responsibility for them as acts of genocide.

Like many ethnic Armenians in the United States, Archbishop Manoogian was a descendant of the large Christian population that was expelled from what is now Turkey in a campaign of ethnic cleansing undertaken by the Ottoman military between 1915 and 1923. An estimated one million Armenians were killed or starved to death. The archbishop was born in an Armenian refugee camp near Baghdad after his parents fled their Turkish town during the killings.

The Turkish government maintains that many died on both sides of an ethnic conflict between Armenians and Turks during World War I, but that Turkish authorities never adopted a program of genocide. Armenians have long demanded Turkish atonement for what most historians consider the first organized genocide of the century.

Archbishop Manoogian enlisted the American Catholic Conference, the American Jewish Committee and the Islamic Center of Washington to join in demanding that Turkey acknowledge the atrocities. Gov. Hugh L. Carey of New York signed a proclamation demanding the same.

The historian Barbara W. Tuchman, whose grandfather Henry Morgenthau Sr. was the United States ambassador to the Ottoman Empire in 1915, related his eyewitness account of the massacres before a standing-room-only crowd at the Felt Forum in Madison Square Garden.

Peter Balakian, author of “The Burning Tigris: The Armenian Genocide and America’s Response,” said the scale of the 1975 commemoration was groundbreaking and well timed.

“Holocaust studies and a new American human rights culture had emerged in the ’60s and ’70s,” he said, and “the archbishop was astute in seizing that moment” to place the Armenian genocide “within the new arc of Americans’ commemorative memory.”

Several days of 60th-anniversary observances culminated in a march from St. Vartan’s Cathedral past the United Nations and into St. Patrick’s Cathedral. There, in his sermon, Archbishop Manoogian addressed an audience of survivors, their descendants and other supporters.

Many were involved in organizing the events, but Archbishop Manoogian was the survivors’ spokesman, said Christopher Zakian, a diocese spokesman and editor of “The Torch Was Passed: The Centennial History of the Armenian Church of America.”

“He was a witness to the genocide,” Mr. Zakian said. “And — not saying this to diminish his dignity and stature in any way — he was also a P.R. genius.”

Torkom Manoogian was born on Feb. 16, 1919, one of six children of Nargiz and Vahan Manoogian. His parents owned a photography studio in a southeastern Turkish town near the Iraq border. He was sent to school in Jerusalem at 12 and ordained as a priest in 1939.

He arrived in the United States for the first of several church assignments in 1946, serving in California and Pennsylvania. He was primate of the Western Diocese in 1962 and named a bishop the same year. He became an archbishop in 1966, soon after he arrived in New York.

After the 1988 earthquake in Armenia, which killed more than 50,000 and left many more homeless, he spearheaded church relief efforts in the United States.

In 1990, Archbishop Manoogian was appointed patriarch of Jerusalem, a primarily diplomatic post that he held until his death.

Archbishop Manoogian was an authority on Armenian sacred music and on the work of the musician-priest Komitas, who became mentally ill during the Armenian genocide and is considered one of its martyrs. He died in 1935 in Paris. The archbishop also wrote poetry under the name Shen Mah and completed an Armenian translation of Shakespeare’s sonnets.

His survivors include a sister, Dzovig Devletian, and two brothers, Khachig and Sooren, all of whom live in the United States.