Tony Iommi: I’ll be cheering on Armenia in Eurovision semis

Black Sabbath guitar hero Tony Iommi will be glued to the telly on Thursday – to see if his song makes it through to the final of the Eurovision Song Contest.

The 65-year-old rock legend dusted off an old ballad titled Lonely Planet when Armenian broadcasting bosses came knocking at the door of his Lapworth home.

Thankful for all the charity work Tony has done in their country, where he has spearheaded the rebuilding of a music school destroyed by an earthquake, they wondered if he had any spare songs.

And this week Armenian rocker Gor Sujyan and his band Dorians will belt out Lonely Planet in the semi-final of the contest. If it fends off stiff competition, the song will make it through to Saturday’s final.

“I was shocked when the riff I gave them to work with ended up being the country’s official entry in the competition, chosen by public vote from hundreds of songs,” says Tony.

“But on Thursday night it’ll be heard by millions of people when the semi-final is broadcast. And if it survives, and makes it through to the final, then that’ll great. Unexpected, but great. 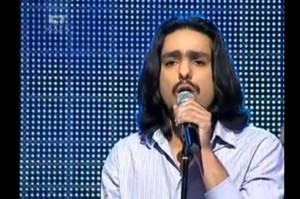 “The contest is being staged in the Swedish city of Malmo and I’ll be watching to see how they get on. It falls between our tour dates so I’ll be able to watch it on television.”

Not that Tony regularly watches Eurovision. Far from it.

“I’ve always thought ‘Oh no, not the Eurovision’, and here I am in it now,” he smiles. “I first said ‘Oh God, I don’t know. It seemed really strange, me doing a Eurovision song, I don’t usually do that.

“But I really hope it does well.”

Tony’s music has had lyrics added by songwriter Vardan Zadoyan, and the song is a plea for world peace. It was one of four tracks presented to Armenian voters and won by a landslide.

A competitor since 2006, Armenia has never won Eurovision – but the song is riding a wave of popular acclaim and if it makes the final could well beat the UK’s entry, Believe In Me by Welsh warbler Bonnie Tyler.

In the meantime, the music school being rebuilt in Gyumri, is expected to open in September.

“I’ve been working with the people in Armenia for some years, and we’re currently building a music school to replace the one that was destroyed by an earthquake in 1988,” says Tony. “We’ve had a huge amount of support.

“Only the other week a Canadian firm came in with a truckload of musical instruments. The school is due to open in September and I’m looking forward to getting back out over there for that.

“A big thank you to Tim and the team at Millbank Music in Canada for the huge pile of instruments now on their way to Armenia. With support like this the project was always going to be successful.

“When the school opens this summer they’ll be off to a great start!”

Among others closely involved in the project, under the banner WhoCares, is Deep Purple singer Ian Gillan, a close friend of Tony’s who also enjoyed a successful stint as Black Sabbath singer.