To Infinity and Beyond: Armenians in the Mars Rover Curiosity Project

Since the beginning of time, Space has been a source of mystery for man—a mystery they sought to decipher. Thanks to the scientific curiosity of Ptolemy, Galileo Galilee, and Isaac Newton, man has discovered numerous planets, landed on the Moon, and has even captured ancient images of space with the Hubble telescope that shine light on the Big Bang. Scientists know that our planet Earth has the perfect components for life, but as Earth begins to feel the effects of global warming and human overpopulation, it is only natural that scientists start looking to Space for answers- particularly from our neighbor, Mars.

August 5, 2012 at 10:31p.m. PDT, the Mars Rover Curiosity successfully descended on parachute and landed upright on Martian soil. Curiosity is part of NASA’s Mars Exploration Program, a long-term robotic exploration of the red planet so close to our own home! Curiosity was designed to assess Mars’s habitability, and to see if it ever had the proper environment to support small life-forms called microbes. The rover carries the largest, most advanced suite of instruments ever sent to Mars and will analyze samples scooped from the soil and drilled from rocks. Any planet’s geology record is essentially stored in rocks and soil- particularly in the formation, chemical composition and structure. Curiosity has an on-board laboratory and it will study rocks and soil in order to detect any chemical building blocks of life in order to piece together Mars’s past.

One of the most impressive features is Curiosity’s power source. The rover carries a radioisotope system that generates electricity from the heat of Plutonium’s radioactive decay. Radioactive decay is the process by which an atomic nucleus of an unstable atom loses energy by emitting ionizing particles. In turn, an ion is created when an atom gains or loses a charged particle, such as an electron or a proton. This power source is strong enough to give Curiosity a life-span of one Martian year, or 687 Earth Days, and also gives Curiosity more operational flexibility and greater mobility than any previous Mars mission.

According to JPL, Curiosity represents a huge step in Mars surface science and exploration because it demonstrates the ability to land a very large and heavy rover to the surface of Mars, as well as demonstrating the ability to land more precisely in the calculated landing circle. This is a large feat! Not only am I proud as a scientist, but I’m also proud to know that there were fourteen Armenians who collaborated in this project’s success! Arbi Karapetian, a group supervisor at JPL, joined the project during the design and implementation phase. He was a Test Conductor during Assembly, Testing and launch. When asked how he felt about the project’s success, Arbi said “As an engineer you’re aware of statistical analysis and reliability. Every engineer understands that you do the best you can, but there’s always room for failure. This project was exponentially more complicated than any previous project because of the advances in engineering. The complexity was so high that you could no longer have one engineer, the work had to be spread amongst many engineers, which allowed more room for error.” Arbi was very proud of the team’s accomplishment, and the success was the greatest reward for all the long, arduous hours they put into the project. “If you love doing what you do, then you’ll never work a day in your life. There are very long hours which are taxing on everything you do. If this is really your passion, then all of that lines itself up, and it’s not hard to get motivated to do what it takes.”

The following Armenians made significant contributions to the success of the MSL (Mars Science laboratory) Project: Avo Demirjian, Vache Vorperian, Alfred Khashaki, Felix Sarkissian and Hrair Aintablian in the field of Electronics; Garen Khanoyan and Richard Ohanian on the Landing Radar System; Serjik Zadourian and Vazrik Kharakhanian in Assembly Test and Launch; Gayaneh Kazarians in Biology; Hanry Hartounian in Flight Software; Armen Toorian in Mechanisms and Testbeds; and Zareh Gorjian in Computer Animation.

In honor of the microbes we are searching for in our neighboring red planet, I decided to share a yogurt panna cotta recipe!

Coat six 6-oz custard cups or ramekins with nonstick cooking spray. Whisk yogurt, half-and half, and vanilla in large bowl. Pour lemon juice in small bowl and sprinkle gelatin over it; let stand 5 minutes to soften. Heat cream and sugar in small saucepan over medium heat, stirring until sugar is dissolved, about 2 minutes. Remove from heat, stir in softened gelatin until dissolved, and stir quickly into yogurt mixture until blended. Divide mixture into prepared custard cups (about 1∕2 cup in each). Cover; refrigerate about 4 hours or overnight. Toss strawberries with honey; let stand at room temperature about 10 minutes. Run a small knife around each panna cotta, shake gently and invert onto serving plate to unmold. Serve with strawberries and an additional drizzle of honey, if desired. 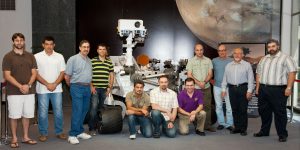