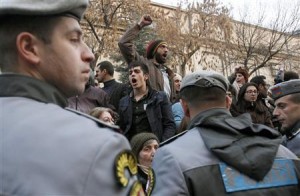 Supporters of Sarksyan’s second-placed rival Raffi Hovannisian filled Freedom Square in the center of the capital Yerevan to condemn what they said were uncounted ballots and other violations.

“The constitution should win over fraud,” he said, raising a first above his head after kneeling to kiss the national flag.

Many of Hovannisian’s supporters vowed to continue their protests until Sarksyan quits, but the crowd dispersed quietly after three hours and there was no violence.

Some protesters said they would gather again in the square on Thursday.

Hovannisian did not make clear whether he would formally challenge the result of Monday’s election, which showed Sarksyan won 58.6 percent of votes, far ahead of Hovannisian, a U.S.-born former foreign minister, on nearly 37 percent.

International observers found an improvement in the conduct of the election compared to the last presidential vote in 2008 but said the vote lacked real competition.

Some of Sarksyan’s most popular political rivals did not take part, saying the vote would be skewed in his favor. Police said they had received reports of voting irregularities which they were looking into.

Hayrabet Hovannisian, a musician who joined the protest on Wednesday, said he voted for a different opposition candidate but wanted to show his anger over the allegations of fraud. 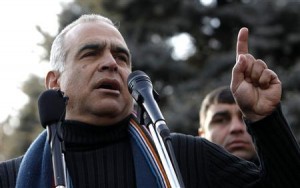 “Today I came here to be together with the people, to return to the people their stolen votes,” he said.

Foreign governments and investors fret at any hint of violence in the country of 3.2 million in the South Caucasus because it lies in a volatile region that carries Caspian oil and natural gas to Europe.

Landlocked Armenia’s relations are tense with neighboring Azerbaijan over the mountainous enclave of Nagorno-Karabakh, which is inside Azeri territory but has been controlled by ethnic Armenians since a war in the 1990s.

After the 2008 election, eight protesters and two police were killed in clashes. But there was no violence during Monday’s voting.