The Power of a ‘Losh’ Kebab 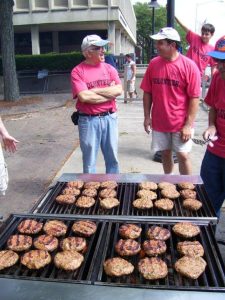 ‘Losh’ kebab patties sizzle on the grill at the Lowell Folk Festival, ready to be sold by the ‘Lousintak’ ARS Chapter.

Today’s question is one that bears a little scrutiny. Granted, it doesn’t have the impact of a presidential election or the fluctuating economy, but it does hold its place in society.

“What’s round and plump, sizzles on a grill, carries the lineage of generations, and still has magnetic appeal?”

If you said a juicy sirloin, close but no blue ribbon. The correct answer would be a…losh kebab.

I’m not talking a plain, ordinary burger here but a concoction of beef or lamb (or both) with the right measure of tomato paste, parsley, onions, herbs, and spices, done with plenty of TLC.

If you don’t believe me, just ask the Lowell Armenian Relief Society (ARS) Chapter. The “Lousintak” members draw hundreds of hungry visitors to their tent each year at the Lowell Folk Festival.

The extravaganza takes place over the last weekend of July and no doubt the Armenian booth ranks right up there with the ethnic favorites, judging by the lines that form at the rear. Everyone from a security officer to a musician plays the crowd.

Say what you want about the lahmejun that’s also served up, the pilaf and salad sides, the yalanchi and Armenian pastries prepared by the best of hands. But when push comes to shove, it’s the almighty losh that steals the thunder. Trust me, and the sweat that rolls off my back as I help man the grill. We can’t keep up with the demand.

Call it a burger, maybe even a patty. To us, it’s the losh–a slice of Armenian culinary arts that hasn’t lost its pizzazz over history.

Okay, the shish may take exception to that. A skewer of lamb, complemented with onions, peppers, and tomatoes, may be a hard combination to beat. But don’t tell the cow that. From “moo” to you.

Nothing promotes our ethnic heritage better than food. Not art. Not music. Not literature. While all these facets are well and good, they do not satisfy the palate as much as a mouth-watering losh. Serve it up in a pita or by itself with pilaf and salad.

Should one come apart in transit, no problem. Into a side dish it goes to feed the help.

Don’t just take my word for it. Very Rev. Fr. Ghevont Samoorian, who pastored Sts. Vartanantz Church in Chelmsford from 1968-94, pretty much depends upon a wheelchair these days to get around. Yet, he maneuvers himself over to the ARS booth and places his order for a losh combo. You can see the zest in his eyes when the meal arrives.

As usual, a few words from the wise: “I’ve eaten the best of foods in the best of places and there isn’t anything better than this,” he proclaims. “The losh has its place in our culinary society. But there’s nothing that tops Armenian food in general.”

An epicurean known for his voracious appetite, Very Rev. Samoorian is a new man these days, despite his handicap. He shed 140 pounds and is enjoying a fresh lease on life.

Another regular is long-time weatherman Al Kaprielian, now with Radio Station WCAP, which broadcasts live from the festival. The Armenian in him says to patronize his own kind. Before the popular meteorologist has a chance to sink his chops into a losh, he gets queried about the weather, especially if there’s a storm cloud hovering above.

“Best I’ve ever tasted,” he blurts out. “I look forward to one of these every year. The festival wouldn’t be the same were it not for the Armenians and their losh kebabs.”

Anywhere from 6-10 people are cooking up their storm with another 15 under the canopy dishing it out.

The ARS knows how to involve the masses. Festival chairwoman Sossy Jeknavorian taps into her Sunday School students, gets the AYF involved, and beseeches the help of the Lowell Gomideh. All work together in near harmony.

“We’re like a happy family here,” she contends. “The community binds together come festival time.”

The week-long process includes everything from readiness to implementation. Out of it comes a profit that goes toward supporting the clubhouse and an array of Armenian-American charities.

Taking her venerable place by the grill was Rose Narzakian, whose husband Harry was the quintessential BBQ king until his death nearly a decade ago. Harry had the instinct to contrive the perfect losh. He would have been 90 today and still cooking.

It’s in his memory that the losh still lives around this festival. Listen and you shall hear.

“Flip ‘em before they burn. A good losh should be tender and juicy.”