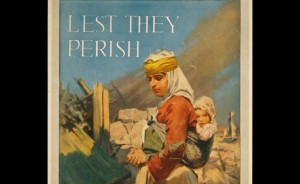 Images from a century ago, advocating for American aid to children in Syria and Turkey after they became victims of genocide
Emma Green Aug 30 2013, 12:12 PM ET
0

A 1917 poster created by the American Committee for Relief in the Near East asking for $30 million dollars to help victims in Armenia, Greece, Syria, and Persia. (Library of Congress)One hundred years ago, when the United States faced a choice to become involved with a human rights crisis in territory now divided into Syria, Turkey, and Armenia, we chose to stay out. After ethnic Armenians were massacred by the Ottomans during World War I, President Wilson urged Congress to help the remaining population establish a country of their own. But, claiming that the American public wouldn’t support such an intervention, Congress said no.Spooky, isn’t it?On the night of April 24, 1915, Ottoman soldiers arrested more than 200 ethnic Armenian leaders and intellectuals in the empire’s capital city, Constantinople. The men were later executed at a prison in inner Anatolia, which is part of modern-day Turkey. Over the next seven years, an estimated 1.5 million Armenians died during death marches through the Syrian desert, mass executions, and epidemics at the open-air camps where they were held, many of which were located in what is now called Syria.

Americans in the region raised money to feed, clothe, and house Armenian refugees, including orphans whose parents were killed in the massacres. One organization, the American Committee for Armenian and Syrian Relief, raised millions of dollars through rallies and church collections. One fundraising campaign called for $5 million “to relieve 1,000 destitute, exiled, and starving Armenians scattered broadcast over Turkey, Persia, Syria, and Palestine,” the New York Times reported in 1916. In 1919, the organization was incorporated by Congress into Near East Relief, and today, it is known as the Near East Foundation.

The imagery used in these fundraising campaigns is chilling. A 1917 campaign for $30 million paired illustrations of women and children with pleas for help. On one poster, Americans were reminded to think of “The Child at Your Door: 400,000 Orphans Starving and No State Aid Available.”

“Give or We Perish,” another warned.

Archival photographs show the organization’s efforts to relocate orphans. “Like little French soldiers,” one reads. “Some of the children being moved from Turkey to Greece to the American Near East Relief. In Constantinople, the children were outfitted in light blue uniforms which made them look like miniature French soldiers.”

President Wilson strongly supported the organization’s efforts to provide relief to the region’s refugees, and at the conclusion of World War I, he argued on behalf of American intervention in the Armenian case. “Have you thought of the sufferings of Armenia?” he said in June of 1919. “You poured your money out to help succor the Armenians after they suffered; now set your strength so that they shall never suffer again.”

Wilson’s solution was an American mandate for Armenian, meaning the United States would be responsible for helping the new country establish a government and deal with the repatriation of hundreds of thousands of refugees. According to a New York Times report, the U.S. would have also had to provide two to four military regiments “to exert a steadying effect upon the native population,” as well as guidance for creating infrastructure for transportation and sanitation. This mandate failed to get support in Congress, however, and the United States ultimately decided not to participate at all in partitioning the former Ottoman Empire into new countries.

Of course, it is impossible to equate a century-old genocide that was tied up in an international war with today’s situation in Syria. It’s also worth noting how national borders have changed throughout the complicated history that followed; modern-day Armenia lies to the north and east of Syria, and the two countries are separated by Iraq, Iran, and Turkey.

Still, this echo of the past is uncanny — and very, very sad.