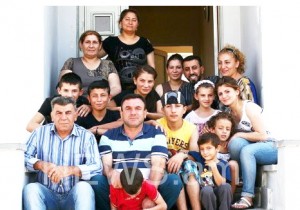 Seventeen-member family of Syrian-Armenians, the Tovmasian family, who spent months in Turkey after escaping the violent war, have finally found refuge in their historical homeland of Armenia.

The Tovmasians had to leave their home in Kobane, Syria, after the family’s father, Hovsep Tovmasian (43), was killed by Islamic State militants outside his home, in front of his son. The surviving members (four brothers’ families, including 11 children) took flight, crossing Turkey’s border to settle in Suruc, where they were given shelter in school premises.

The Armenian Ministry for the Diaspora was informed about the family by Archbishop Aram Ateshian, the Armenian patriarch of Istanbul, and Aris Nalci, an Istanbul-Armenian journalist.

The Ministry, in collaboration with humanitarian NGOs, UNHCR, ICRC Country Office, Mission Armenia, NGO Aleppo and Oxfam in Armenia, arranged for accommodation to be made available in Yerevan for the family, and for the necessary travel documents to be granted.

The travel costs were covered by Raffi Ardhaljian, an advisor to the Diaspora Ministry.

Upon their arrival at Zvartnots International Airport, the family were greeted by Levon Antonian, a Diaspora Ministry official who heads a department on the Armenian communities of Near and Middle East, and representatives of humanitarian and charity NGOs.

According to a press release by the Ministry, the family has now settled in Yerevan’s Silikyan district where they have been given a special detached dwelling.

( Item prepared based on news published by Tert.am )