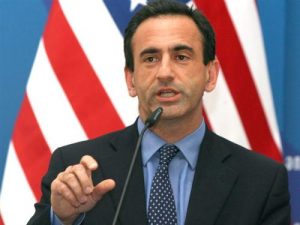 The response came to a letter by ANCA Chairman Ken Hachikian on the June 4-6 Azerbaijani attacks against Armenia and Karabagh that left eight soldiers dead and more wounded. Assistant Secretary of State for European and Eurasian Affairs Phil Gordon, responding for Secretary Hillary Clinton, said the U.S. “deeply regret[s] this senseless loss of life,” and went on to note that “the United States has urged the parties to refrain from the use or threat of force.”

“We remain deeply disturbed by the ongoing artificial even-handedness applied to a belligerent Azerbaijani leadership, which has repeatedly shown–through threats and violence–a blatant disregard for international calls for a peaceful resolution of the Karabagh conflict,” said Hachikian. “This time it was eight soldiers who were killed on the front lines–brazenly timed to coincide with Secretary Clinton’s visit to the region. How many more must die before we hear a clear rebuke from the U.S. and international community of Azerbaijan’s escalating violence and war-rhetoric?”

Commenting on the ANCA’s concerns about reports of an impending sale of military equipment to Azerbaijan for use on helicopters for border monitoring, Gordon noted that “the United States’ security assistance to the region is carefully considered to ensure it does not undermine efforts for a peaceful settlement in Nagorno-Karabagh.”

The complete text of Gordon’s June 13 response to the ANCA is provided below.

The ANCA has circulated a set of seven specific policy recommendations for the Obama Administration and the U.S. Congress to check Baku’s aggression and support the peaceful and democratic resolution of Azerbaijan’s conflicts with Armenia and the Republic of Nagorno Karabagh. Among the recommendations is a call for the Obama Administration to “suspend all military aid to Azerbaijan, and stop the sale or transfer to Baku of any military equipment or dual-use items (including the proposed sale of advanced helicopter-based surveillance equipment, DDTC 12-002).”

Review the recommendations and urge Congress to take action by visiting www.anca.org/action_alerts/action_disp.php?aaid=61443201.

During his questioning, Sen. Robert Menendez (D-N.J.) cited Azerbaijani President Ilham Aliyev’s recent assertion that “Our [Azerbaijan’s] main enemies are Armenians of the world,” and asked Morningstar, “Do you think, based upon those types of statements, that the proposed sales of military hardware to be used in conjunction with Azerbaijan’s military helicopter fleet is really in the national interest of the United States?”

Morningstar argued, “There are increasing tensions with respect to other neighbors, in particular with Iran. And we have to provide, I think, security assistance, possibly military assistance in ways that cannot be used to exacerbate any situation with respect to Armenia or Nagorno-Karabagh.” Menendez was quick to respond, reminding Morningstar that “I didn’t hear President Aliyev say, ‘My main enemy or security concern is Iran.’ He said that, ‘Our main enemies are the Armenians of the world…’ I have a real problem with going ahead and selling military hardware to the Azerbaijanis based upon what has happened.”

Alarm bells regarding the State Department’s consideration of a sale of helicopter equipment that could be used for cross-border monitoring were first raised in a letter to Clinton by House Foreign Affairs Committee Ranking Democrat Howard Berman last month. In addition to possible attacks against Armenia, Berman expressed concern about the “message that such a sale would send to the regional parties, both in terms of perceived U.S. even-handedness and in terms of our seriousness about persuading Baku to cease its bellicose rhetoric and agree to Minsk Group co-chair demands that it remove its snipers from the ‘line of contact’ in the Nagorno-Karabagh region.”

Below is Philip Gordon’s response to the ANCA.

Thank you for your letter of June 4, 2012, to Secretary Clinton. I am responding on the Secretary’s behalf.

We are following reports regarding the recent incidents along the Armenia-Azerbaijan border and deeply regret this senseless loss of life. As Secretary Clinton emphasized during her recent trip to the region, the use of force will not solve the Nagorno-Karabagh conflict. The United States has urged the parties to refrain from the use or threat of force, and as co-chair of the OSCE Minsk-Group, we remain committed to working with the sides to achieve a peaceful settlement. As the next step in the peace process, the Minsk Group co-chairs will meet later this month with the foreign ministers of Azerbaijan and Armenia.

Regarding the other issues that you raised, the United States’ security assistance to the region is carefully considered to ensure it does not undermine efforts for a peaceful settlement in Nagorno-Karabagh.

The Department values its ongoing dialogue with the Armenian National Committee of America regarding these issues. If you have any additional concerns, please do not hesitate to contact us.