She is ‘very concerned’ about instability, clashes in Nagorno-Karabakh

YEREVAN, Armenia — Secretary of State Hillary Rodham Clinton on Monday kicked off three days of diplomacy in Europe’s Caucasus, expressing concern about recent clashes between Armenia and Azerbaijan as she hopes to mediate progress on a slew of trade and territorial disputes.

In the middle of a weeklong European tour, Clinton decried the “senseless deaths of young soldiers and innocent civilians” as part of the Nagorno-Karabakh conflict — just hours after the latest border clash. Armenia said three of its soldiers died and five were wounded. It wasn’t clear if any Azeri soldiers died.

“I am very concerned about the danger of escalation of tensions and the senseless deaths of young soldiers and innocent civilians,” Clinton told reporters after a dinner with Armenia’s president and foreign minister. “The use of force will not resolve the Nagorno-Karabakh conflict,” she said, urging the sides to refrain from violence.

The border clash underscored the instability of a region with long-simmering problems and surrounded by powerful neighbors Russia, Turkey and Iran. She left Armenia Monday night for neighboring Georgia, looking to strengthen security ties with a stalwart U.S. ally that was crushed in its 2008 war against Russia and hopes to regain control over two lost provinces. She visits Azerbaijan Wednesday.

Warning that Azeri-Armenian tensions could escalate into a broader conflict with terrible consequences, she said the U.S. would continue to press with France, Russia and others on mediation efforts. 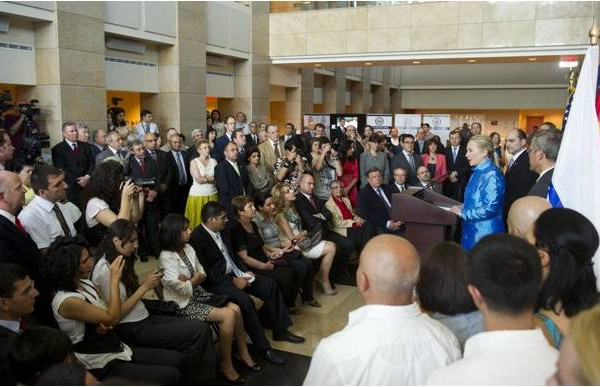 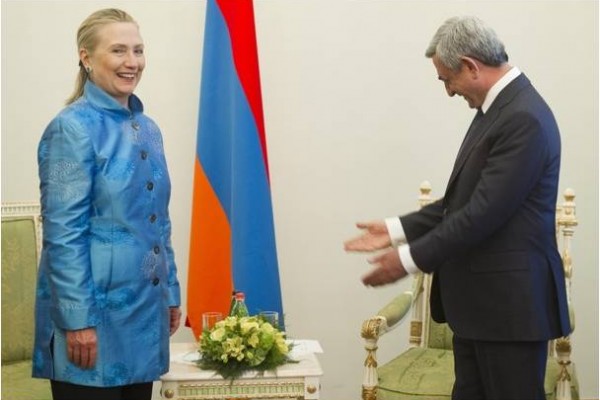 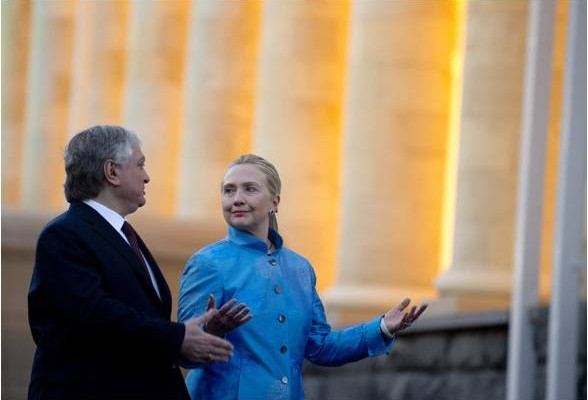 The mountainous Nagorno-Karabakh enclave is within ex-Soviet Azerbaijan, but was taken over by Armenia during a six-year separatist war that killed about 30,000 people and displaced 1 million. Since the war’s end in 1994, it has remained under the control of Armenian troops and ethnic Armenian forces.

Violations of the cease-fire have been frequent, and diplomatic efforts to solve the conflict have failed. The U.S. hopes that at the least Armenia and Azerbaijan can agree to a set of basic principles that might lead toward peace. These include the return of territories and uprooted people to their homes, and an eventual vote on the area’s future.

Washington also wants to normalize relations between Armenia and Turkey, whose enmity reflects the Nagorno-Karabakh conflict and the Ottoman Empire-era killing of some 1.5 million Armenians.

The Obama administration has tried hard to help Armenia improve its economy, not least as a nod to the influential Armenian-American community, which is particularly strong in the Los Angeles area. Clinton, making her second trip to the region as secretary of state, helped Armenia and Turkey reach an agreement in 2009 that would have opened up their borders and normalized relations.

But the deal stalled back as Turkey’s parliament refused to ratify it.

Armenia’s problems are compounded by its geography. Cut off from trade with its booming neighbor Azerbaijan on one side and Azerbaijan’s ally Turkey on the other, it must conduct all its international commerce through Georgia and Russia to the north. It is heavily dependent on Moscow for fuel.

In Georgia, Clinton will underscore America’s commitment to its pro-Western partner’s defense and its hope of regaining control of breakaway South Ossetia and Abkhazia. Both declared independence after Russian troops routed the Georgian military over five days of fighting. Few governments beside Moscow have recognized them.

In Azerbaijan, America’s top diplomat will continue efforts toward a breakthrough in the Nagorno-Karabakh region, while addressing democracy and media freedom shortcomings. But she’ll also underline oil-rich Azerbaijan’s close cooperation with the U.S. on counterterrorism and its booming economy, which has expanded fourfold since 2004, attending an energy industry gathering in the capital of Baku to promote American companies and future investments.

She will likely speak to officials as well about Azerbaijan’s southern neighbor, Iran.

Azerbaijan has arrested dozens of people it claims were hired by the Islamic republic to carry out attacks against the U.S. and Israeli embassies, as well as Western-linked groups and companies.

Copyright 2012 The Associated Press. All rights reserved. This material may not be published, broadcast, rewritten or redistributed.