Scribbles in a Hand

In Yegheki, a few miles from Keserig, we stand in front of headstones tossed on the side of the street.

“From the day we opened our eyes, a church stood here. They kept tearing down its walls and taking away the stones until almost nothing remained,” an old woman tells me, as she walks past the ruins of the Armenian church in Keserig (Kesrik).

We are in historic Armenia visiting the ruins of churches and cultural monuments, and talking to the locals.

In Yegheki, a few miles from Keserig, we stand in front of headstones tossed on the side of the street. They lie there as the sole survivors of the village’s Armenian cemetery. It seems that the few who survived the genocide and returned to their villages never found peace—not even in death. On my hand, I scribble the inscriptions on the tombstones.

In Elazig, we visit a saddle-maker’s workshop. “I am one of you,” he says. His mother was an Armenian woman who was “left behind.” We have tea. He tells us she had two brothers who managed to escape the genocide and go overseas. He knows nothing about their whereabouts. I hold his hands in mine and tell him we shall meet again.

We soldier on through the recurring scenes of abandonment and destruction, visiting Kharpert, Palu, Hussenig, Pazmashen, Tadem, Parchanj, Morenik, Khoshmat, Sakrat, Gezin, Uzunova, Havav—and several other towns and villages. Almost every Armenian ruin we visit bears the scars of intentional destruction and desecration: ditches dug up in churches and cemeteries in search of Armenian gold; shattered cross-stones; scattered bones; and graffiti—sometimes offensive or racist, sometimes the acronym of a radical Turkish right-wing party—sprayed on the walls. I try, without much success, to rub off the words on one of the stones. “Death to Agop.” 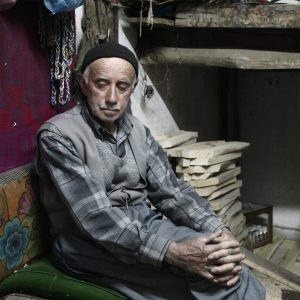 In Elazig, we visit a saddle-maker’s workshop. “I am one of you,” he says. His mother was an Armenian woman who was “left behind.”

In one village, we find the gate of an Armenian school and the intricately carved stone arch around it grafted into the house of a local notable. Perhaps this was the only way the gate and stones could be preserved, we say, consoling ourselves. I stand there for a while, touching the carved stones…

We arrive at the church in Tadem Mezre, one of the least damaged Armenian churches in the area (its walls and even dome are standing), with hopes of finally seeing a structure not entirely reduced to rubble. But one of our companions, a historian from Elazig whose grandmother is Armenian, points us to the base of the church’s pillars.

“Fascists from nearby villages are doing this,” he says. “At some point, the entire structure will come crumbling down.” 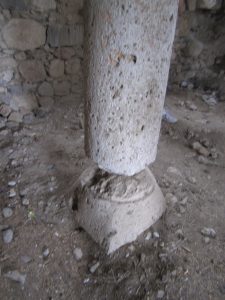 "Fascists from nearby villages are doing this," he says. "At some point, the entire structure will come crumbling down."

We stare in horror. The bases of at least two pillars have been considerably reduced in diameter, resembling axed trees right before they fall.

It starts pouring outside. By the time I reach our van, I am soaking wet. I notice that the scribbles in my hand are vanishing. I salvage what I can still read and type it in my laptop. One of the tombstones in Yegheki bore the name of Stepan Tatoyan, who died in 1964; another told us of Heghine (1912-53). I say a prayer for their souls and for the survival of their headstones.

Note: Armenian Weekly Editor Khatchig Mouradian, Assistant Editor Nanore Barsoumian, and Weekly contributor George Aghjayan recently returned from a trip to the Kharpert, Chounkoush, Keghi, and Dikranagerd regions. The Weekly will publish a series of articles about their pilgrimage and encounters in the coming days.