Students of the Yerevan State University and members of the Gurgen Margaryan NGO organized a march to the Yerablur military cemetery in the Armenian capital – the resting place of the officer who was hacked to death while being asleep by Ramil Safarov, an Azeri fellow student at NATO-sponsored English language courses in Budapest, Hungary, in 2004.

Safarov, who struck the sleeping man 16 times, cutting his head off the body with an axe he had purchased the night before has not repented his heinous crime. In 2006 he was sentenced to life in Hungary without the right of pardon for the first 30 years, but on August 31 this year Hungary agreed to extradite the criminal to Azerbaijan, where he was met as a hero, was pardoned by the presidential decree and was promoted to the military rank of a major. Safarov also received his back salary for the eight and a half years he spent in jail in Budapest. 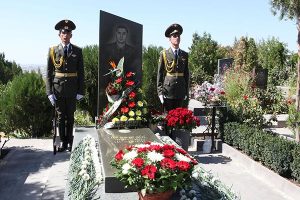 Safarov’s extradition caused a great wave of criticism from the international community and a strong reaction from official Yerevan that suspended diplomatic ties with Budapest. The Armenian National Assembly accused Hungary of “creating a precedent encouraging ethnic hate crimes against Armenians.”

At a press conference in Yerevan today expert on international law Levon Gevorgyan said that Armenia and Hayk Makuchyan (Margaryan’s classmate in Budapest, who escaped death at the hands of Safarov) should demand material compensation from Azerbaijan as well as to get the political levers of pressure.

He said that the lawsuit against Azerbaijan should be based on its violation of a person’s right to life, as well as violation of the international convention on elimination of discrimination on ethnic grounds.

Gevorgyan also noted that such a legal process will demonstrate the impossibility for Karabakh people living under the rule of Azerbaijan, the country, where a murder is being justified only for the reason that the victim was an Armenian.

Meanwhile, the Safarov Affair continues to affect not only the political relations but also the joint cultural projects between Armenia and Hungary.

Renowned Armenian pianist Hayk Melikyan called off his tour of Hungary where he was due to perform in late October at the concert hall of the Moholy-Nagy University of Art in Budapest. The pianist made a statement saying that he felt insulted by the humiliating step of the Hungarian state aimed against the Armenian nation.

Early in September the Yerevan State University cancelled the earlier confirmed participation in a conference to be held at the Central European University’s Center for Eastern Mediterranean Studies.

A note of protest did not bypass the upcoming HighFest either. The 10th International Theatre Festival is due to be held in Yerevan on October 2-9. Still in summer it was planned that the headliner of the festival will be the Center of the renowned Hungarian dancer and choreographer József Nagy, who was to present a performance of Hungarian dances. As a result the HighFest organizers themselves asked the Center to cancel their performance in Yerevan.

The extraordinary thing about this is that as many as 25 theaters representing 18 countries including Turkey will take part in HighFest, but Hungary will not be represented.

Nevertheless, the Turkish “factor” has became an occasion for indignation in connection with another cultural event in Budapest, where the Armenian community reacted angrily to plans to erect a monument to Kemal Ataturk, the founder of the modern Turkish state. The monument is due to be unveiled in the Hungarian capital on September 29. Representatives of the community say that the establishment of this monument does not meet the interests of Hungary against the background of the continuing scandal around Safarov’s extradition.

Hungarian media, citing Russian sources, write that renewed hostilities in Karabakh are possible in the current tense atmosphere between Armenia and Azerbaijan.

“The Safarov Affair suits the interests of both Yerevan and Baku to abort attempts to achieve peace. They have not decided to go to war yet, but they’ve already turned away from peace,” writes Nepszava Online.

In Armenia, meanwhile, another controversial decision related to the world of sport has elicited a mixed reaction. In early September international chess’s governing body FIDE decided to grant Baku the right to host the 2016 World Chess Olympiad. Armenian sports functionaries threatened to boycott the event.

Before the final vote on the decision at the FIDE Executive Committee its officials reportedly got guarantees of security for all athletes from Azerbaijan. President of the Chess Academy of Armenia Smbat Lputyan stated, however, that if the Olympiad in 2016 is held in the Azerbaijani capital, Armenian players will refuse to participate in it.