Russian Foreign Minister Sergei Lavrov will pay a visit to Armenia on April 2-3 and then leave for Azerbaijan. 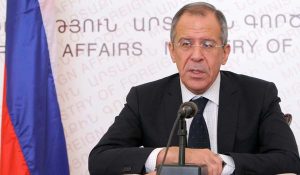 Although the visit is called a South Caucasus tour, it is clear that Lavrov will not visit the third country of the South Caucasus – Georgia. After the Russo-Georgian war in August 2008, these two countries have no diplomatic relations. Earlier, Georgia had forced Russia to withdraw its military bases stationed in the territory of that country and now Tbilisi is seeking to become a NATO member.

In this context, experts believe that the purpose of the Lavrov tour dedicated to the 20th anniversary of establishing diplomatic relations with Armenia and Azerbaijan is an attempt to reaffirm the fact that these two South Caucasus countries are in the zone of Russia’s influence.

The reasons for suspecting that, in particular, Armenia begins to straighten up after a strong bias towards Russia is that its parliamentary minority party, Heritage, joined its efforts with another liberal party, Free Democrats, on a joint platform to contest the May 2012 parliamentary election. This political alliance is known to be against Armenia’s decision two years ago to prolong the lease on Russia’s military base in the country till nearly the middle of the century. Besides, these liberal forces believe that while Armenia should try to build friendly relations with Russia, it still needs to strive for Europe.

Pro-European orientation is felt even in the programs of the ruling coalition parties, and Armenian Defense Minister Seyran Ohanyan, who paid a three-day visit to the United States last week, stated on Thursday that Armenian-American military cooperation will be expanded in the near future.

It is yet early to speak about Armenia having decided to review its current relationship with Russia, but it is already obvious that the taboo from this subject has been removed.

Remarkable in this regard is the statement by the Russian Foreign Ministry issued before Lavrov’s visit. The statement emphasizes that “intensive contacts with Armenia make it possible to solve urgent issues of cooperation and coordinate positions on key issues of international politics on a pragmatic and mutually beneficial basis.”

The Russian Foreign Ministry highly evaluates the work of Russian companies in Armenia’s economy. According to its data, they “fully provide the internal demand of Armenia in natural gas and fresh nuclear fuel, as well as a steady supply of industrial and social spheres with electric power.” In other words, the Russian Foreign Ministry “hints” that Armenia completely depends on Russia both in terms of international politics and for its energy security.

It is noteworthy that the same processes are now taking place in Azerbaijan, which is increasingly leaning towards the construction of the Trans-Caspian pipeline, through which, together with Turkmenistan, it expects to transport natural gas to Europe, bypassing Russia.

Besides, Azerbaijan and Russia still cannot come to terms on the Gabala radar station after Azerbaijan raised its rent from current $7 million to $300 million a year.

In other words, the top Russian diplomat has something to talk about in both South Caucasus republics.