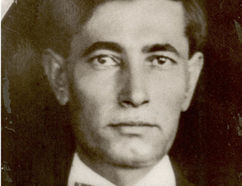 This year marks the 100th anniversary of the sinking of the Titanic, and the largest exhibit of its recovered artifacts is on display here in Dearborn at the Henry Ford. It’s been dubbed “America’s greatest authentic history attraction,” with hundreds of thousands visiting each year.

Over 1,500 people perished that night of April 15, 1912, but David Vartanian from Oror, Keghi, the father of Rose Vartanian, survived because of pure tenacity.

We were delighted to be tablemates of Rose and son Greg, providing an opportunity to do some catching up on family history.

In recent years our relationship was conducted via phone. This buffet party was an opportunity to discover many interesting details of Rose’s and my relationship, going back to our parents in the yergir (country).

Her mother Mary Baidzar was from Dzermag, Keghi, just as my father Mamigon Apigian was; they were distant cousins. Dzermag is known as the pagharch capital of the world and Rose has fond memories of her father making it with her mother years ago in Meadville, Pa., and then in Detroit.

It was Rose’s now-deceased husband George Vartanian who told me at a church coffee hour that the Apigians were related to his wife Rose. Our next objective was to discover how that is.

Rose Vartanian is still the dark-haired, attractive woman I remember from the past. Our conversation flowed easily but it was the extra attention she was getting from friends that day, now aware of her celebrity as the daughter of Titanic survivor David Vartanian, known as “Titanic David.”

Admirers came up to Rose requesting a photo shoot with them and offering congratulations, after seeing her and her father the focus of the Titanic Artifacts Exhibition. Her smiling demeanor suited her popularity as she modestly accepted compliments.

Rose and son Greg attended the exhibit featuring a three by five-foot poster telling about David Vartanian, and mentioning his daughter Rose, who happened to reside locally in Dearborn.

David was one of two Armenian survivors of that epic maritime tragedy, after fleeing the turmoil percolating in their Keghi villages. Neshan Krekorian, the other survivor, lived out his life in St. Catherines, Ontario.

Three other Armenians perished in the sea, with one of their bodies recovered and buried in Nova Scotia.

Rose recounted how her father had just recently married her mother Mary Baidzar in 1911, and had taught himself how to swim in a small creek near his village in Oror, Keghi. It was what helped save the young bridegroom’s life from the icy Atlantic. She says, “He was on his way to Brantford, Ontario in Canada to join other Keghetsis who worked in area foundries.”

Greg, a retired United States Federal Marshal, was asked by the Henry Ford’s museum director to give a presentation on the Titanic’s sinking. His detailed stories fascinated the audience and he was later inundated with questions. It had remained unknown to so many that a living relative of “Titanic David” lived nearby.

Greg says, “ My grandfather told us that the Armenians from Keghi were in steerage down below and fenced in. They broke through this barrier to escape the waters filling the sinking ship. Screams were everywhere and my grandfather broke loose jumping off the ship. When he was trying to enter one of the lifeboats, some of the occupants slapped at his hands to prevent him from getting in, but finally he succeeded later to be saved by passing ship, Carpathia.”

“The lower part of my grandfather’s body had a bluish tint from being in the frigid water for so long and remained that way all his life,” stated Greg.

Rose tells how her father and his young wife were reunited so many years later. Mary Baidzar thought David had died, and he thought she had perished during the genocide. “My father wrote letters to newspapers, churches, and relatives, finally discovering mother was alive and sent money for her passage to Canada.”

Talk about a romantic made-for-movies story of enduring love. Rose says, “My mother came to Canada and an Armenian man took her to the foot of the Niagara Falls Rainbow Bridge on the Canadian side, walking with her only half way across, instructing her to continue alone, not to look back or turn back since she was not a citizen. My dad was on the American side of the bridge, rushing to finally greet her after a separation of 10 years.

It is understandable that “Titanic David” refrained from swimming ever again.

Rose had another detail of her mother’s bridge crossing. “When mom came across the bridge, she had a yohrghan (comforter) tied to her back, which was brought from the homeland. I had the wool washed, cleaned, and made into comforters for my two sons Greg and Gary.”

Rose and I both had our beginnings in Dzermag, Keghi. Other similarities exist: Both our mothers were named Mary; one of my father’s massacred sisters was named Baidzar; she and I both have two sons; I have wool from my maternal grandparent’s sheep that was made into comforters for my two sons; I now have it on good authority that the church in ruins in Dzermag was called Sourp Kevork; and it surely must be that Rose’s mother Mary Baidzar and my father and their families, too, were all baptized in that same ancient church in Historic Armenia. My father also left Dzermag, Keghi in 1912, as David Vartanian did, but fortunately on another ship.

It seems now Rose and I have come full circle. We will happily continue our lives as cousins from Dzermag, Keghi. Blood is drawn to blood.

The Henry Ford Titanic Artifacts Exhibition runs through Sept. 30, and is the largest of all the exhibitions, having drawn hundred of thousands here who are fascinated by the history of the Titanic. Part of the exhibit has a duplicate of the magnificently elaborate staircase, a focal point of the “unsinkable” ship built in Ireland.