YEREVAN (A.W.)—In what will either be viewed as a memorable political triumph or the start of an endless campaign of protests, the Republican Party of Armenia claimed victory in the Armenian National Assembly elections on May 6.

Although international news reports had predicted a win for the Republicans, most leaders of the other political parties vying for seats in the National Assembly had been anticipating a less than highly favorable turnout for the ruling party.

According to data posted by the Central Electoral Commission (CEC) the Republican Party of Armenia won by a landslide with 44 percent of the vote, amounting to over 663,000 ballots in their favor. The Prosperous Armenia Party came in at a distant second place with 30 percent, just short of 454,700 votes.

Both ARF-Dashnaktsutyun and the Heritage/Free Democrats party alliance managed to slide across the threshold needed for representation in the National Assembly, with each earning approximately 5.7 percent of the vote. The pro-government Country of Law (Orinats Yerkir) also secured enough votes to retain its place.

The majority of the winning candidates in the 41 single-mandate districts were Republicans. The others were from the Prosperous Armenia Party and Country of Law. In the hotly contested race of the 7th electoral district, Nikol Pashinian, the firebrand editor of the newspaper Haykakan Zhamanak representing the Congress lost to the incumbent Republican oligarch Samvel Alexanyan, infamously known as “Lfik Samo.” Alexanyan incidentally controls the monopoly on imports of key foodstuffs into the country. Another independent parliamentary hopeful and editor of the news daily 168 Zham, the glamorous Satik Seyranyan, lost to her Republican challenger Artak Sargsyan, the owner of a supermarket chain, in the 4th electoral district. In the 9th district, Levon Zourabyan, a prominent leader of the Congress and confidant of Levon Ter-Petrosyan, likewise lost to a Republican challenger.

Voter turnout was higher than expected, at around 62 percent according to the CEC. Exactly 238 people living outside Armenia voted electronically, the vast majority of them for the Republican Party.

The pre-election campaigning period was described as “competitive, vibrant and largely peaceful” in the OSCE/ODIHR preliminary findings issued Monday afternoon and similar wording was used in its interim report published before the elections. Nevertheless, there were reports of intimidation and beatings in the weeks leading up to the elections. In early April an Armenian National Congress candidate from the town of Armavir was forced to drop out of the race after being attacked and his family threatened by individuals believed to have been linked with his Republican rival.

Almost all of the violations cited in the OSCE/ODIHR report dated April 27 were denied by the authorities. One particularly thorny issue was the donation of tens of tractors to farmers in various regions by the pro-government Prosperous Armenia Party, which denied being involved in measures to gain votes. Also in Etchmiadzin and Yerevan’s Arabkir district school teachers and their own students were obliged to attend Republican party campaign rallies, an accusation party officials strongly denied.

In the weeks before the elections some political groups, the Congress in particular, claimed that as many as 700,000 individuals on the voter lists were ineligible to vote, for reasons ranging from being absent from the country to being deceased. The CEC was sharply criticized by the opposition for being careless when preparing the lists.

The elections were marred by controversy not long after the polls opened at 8 a.m.

There were several reports across the country of stamps made in passports identifying an individual as having voted used with disappearing ink, as was initially reported by Hetq Online. Before placing a vote in the ballot box, a voter was required to have his or her passport stamped and the ballot sealed. By mid morning updates and photos appeared on Facebook only minutes after voters realized that their stamps had vanished.

Hetq also reported that during the first eight hours of election day 151 calls were made to the Human Rights Defender with most complaints about the stamps, long lines at stations or voters arriving in buses. By 9:00 p.m., that number increased to 204.

Several incidents of suspicious behavior in the city district of Achapniag were reported earlier by the Weekly.

Despite the reported problematic polling stations, the atmosphere at many of Yerevan’s precincts, from Shengavit to Malatia to Arabkir, was relatively calm and orderly. Yet at some stations there were complaints made by people having to wait too long to enter and vote. The average number of registered voters per district was around 1,800.

Police presence varied from as many as four officers assigned to a single polling station to none. There was no discernable pattern of logic to the number of officers made available at any given place.

At some polling stations suspicious activity was blatantly obvious. In Erebuni’s precincts 13/32 and 13/33 on Nor Aresh Street in a primary school, one minibus was parked around the corner, while three other Gazelle minibuses assigned to route 62 waited out front (one of them drove up curbside as this reporter was leaving the area.) Two of the buses had a Republican Party flag hanging from the front side window. Inside the precinct the scene was disorganized, with voters standing around with no visible concrete line and mild commotion. There were several suspicious loiterers out front along the sidewalk standing close by expensive black SUVs. Just outside the door entering the school one woman held two cellphones in her hands, texting with one of them. This raised suspicion as one alleged method of vote buying requires that a voter take a photo of the ballot with a provided cellphone. No police were visible. 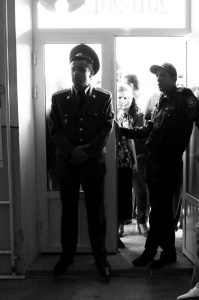 By contrast, at the station for precincts 13/22 and 13/23 on Erebuni Street only a mile away, all was calm and quiet out front. Three officers were posted at each precinct where the line entering the polls began. At 13/22 there was an argument apparently about a voter being out of turn.

At late afternoon in the Aresh neighborhood of Erebuni at precincts 13/09 and 13/10 on Movses Khorenatsi Street four officers were seen and an orderly line had been formed outside the door. There were scores of people loitering outside the building, some exhibiting dubious behavior. One man sitting in the far corner near the flight of steps leading up to the station from the street was studying what appeared to be a list several pages long while chatting with a group of others standing around him, as if to offer protection. Ironically, a police station is found directly across the street from building, with a Republican party campaign office conveniently located only a few doors down. This was the case in most districts, with a campaign office of the ruling party either just down the road or around the block.

In presenting their findings on Monday afternoon the heads of the Organization for Security and Cooperation in Europe (OSCE) and Parliamentary Assembly of the Council of Europe (PACE) elections observation missions were critical of activities in polling stations that hampered the smooth flow of the voting process. They indicated that instances of proxies or observers from political parties becoming involved in issues that were out of their scope to resolve.

“Armenia deserves recognition for its electoral reforms and its open and peaceful campaign environment,” said François-Xavier de Donnea, special coordinator for the OSCE short-term observer mission in a press conference on Monday. “But in this race several stakeholders too often failed to comply with the law, and election commissions too often failed to enforce it. As a result, the international commitments to which Armenia has freely subscribed were not always respected.”

De Donnea also called on the CEC to post the election results in each polling district to raise the public’s confidence level in the electoral process.

“The election campaign was open and fundamental freedoms were respected,” said Radmila Šekerinska, head of the OSCE/ODIHR Election Observation Mission in her report. “In the course of the official campaign the media offered broad and balanced coverage. Unfortunately, this was overshadowed by concerns over the accuracy of the voter lists and violations of the electoral code that created an unequal playing field.”

The political parties challenging the Republicans were inconspicuously quiet on Monday as the final polling results came in. Statements are not expected to be made until sometime Tuesday, May 8.

The Armenian National Congress is scheduled to hold a protest on May 8. By the time of this report’s filing it was still unclear whether ARF and the Prosperous Armenia Party would participate.

National Assembly member Vahan Hovhannisyan of the ARF had indicated in the days just prior to the elections that the party would protest the results in tandem with other political forces if the vote was not deemed free and fair.