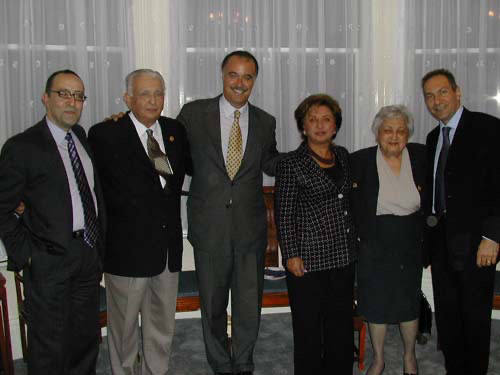 Having learnt few days ago that Dr Rostom Stepanian had passed away at the ripe age of 99, and having been invited by a friend from the Armenian Community Council to share some of my personal thoughts about this man, I scratched my head and soliloquised, “Harry, what do you write about Dr Rostom?”

Most of us knew that he hailed originally from Tehran and that he had made London his home for decades. We knew also that he was an eminent cardiologist as well as an active member of the Armenian community who espoused very clear-cut political views. And some of us also knew his wonderful camaraderie with Seda, his wife, friend and confidante for long years. Perhaps those who lobbied for the recognition of the Armenian Genocide also recall that he was the Chair of the Committee for long years and worked hard in support of this project.

I had the pleasure to be headhunted by the late Dr Rostom upon my return from the Levant. I worked with him for three years as we sought to nudge the British Government closer to a recognition of the genocide. So in a sense, he was my boss. And the many discussions, lunches, coffees or conversations over the years with him, with his wife as well as nephew from Boston, provided me with a keener sense of this man’s worth. But today, I am not going to “talk shop” and will highlight only one singular incident amongst many that defined this man for me.

As some readers – particularly those of the older generations rather than my more recent digital friends – might well recall, I went through a set of death-defying health problems some ten years ago when I was serving both as Ecumenical Consultant to Archbishop Nathan Hovhannisyan and CEO to the Campaign for Recognition of the Armenian Genocide (CRAG). And it was this Armenian chapter of my life that also captured for me the sincere and uncluttered friendship that was part and parcel of Dr Rostom’s more complex humanity.

Ulysses S Grant, the 18th US President, once reputedly stated, “The friend in my adversity I shall always cherish most. I can better trust those who helped to relieve the gloom of my dark hours than those who are so ready to enjoy with me the sunshine of my prosperity.” When discharged from hospital, I was confined to my flat for many long weeks. During this time, most of my Armenian “good” friends slowly vanished from my radar. A lot of them proved to be merely fair-weather friends. But there were good lay friends too – Armen, Ara, Teni, Ararat, Steve. And one of the most remarkable amongst them was Dr Rostom. Here was a man in his eighties who travelled by bus from Putney to Kensington once weekly, went to Waitrose on the High Street, bought two large bags of provisions and carried them walking to my flat. And you guessed it, pomegranate juice was always in the bag!

Over the years, I had heard much gossip about the late Dr Rostom. He was an atheist, a manipulator, a man with a cupboard full of skeletons, someone who rushed into stern judgments. As a lawyer, I would use the word ‘allegedly’ as I had no proof of any of this and so this hearsay did not really interest me. What interested me far more in our warm friendship though was his firm fairness, his risqué humour and his appreciation of satire – particularly when I teased him about his political affiliations – and also his genuine appreciation of irony. The man was secure enough in his own being to listen as much as to talk, to accept criticism as much as to dish it out.

I realise that numerous people knew Dr Rostom far better than I, but I learnt a lot from this man in the short time that our paths intersected in London. Whether he is now scratching his head as he wonders how he had got it all wrong about the afterlife, or whether he has simply disappeared into biological nothingness, doesn’t matter one little jot to me. Mind you, though, I wish his life had been prolonged for one more year as I know that he would have been chuffed to receive the congratulatory cable from Her Majesty the Queen!

But all this is now an already yellowing page of history. For me, Dr Rostom was – simply put – a robust friend.