NEW YORK (A.W.)–Weekly contributor Lori Cinar recently had the chance to interview Tamar Kaprelian, a budding singer-songwriter originally from Arizona whose new album, “California,” was released on June 19. Read on to find out about her life, influences, and plans for the future. 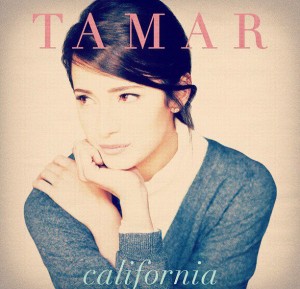 Lori Cinar: Where are you originally from? Where do you live now?

Tamar Kaprelian: I was born in Scottsdale, Az., but I moved around quite a bit as a kid. I lived in Atlanta, Ga. for 6 years and in Los Angeles, Calif. for 10. Currently, I am living in New York City.

LC: How did you get started musically? Did you always like to sing or was it something that developed over time?

TK: According to my parents, I was singing before I was talking, so music was something that always came naturally to me—it has always been something that I love. I started writing songs when I was 15 and started developing my craft as a songwriter from that point on.

LC: Your name really got out there during the OneRepublic cover contest with your rendition of the song “Apologize.” Can you tell us more about that experience?

TK: My producer Xandy Barry told me about the contest and suggested that I enter it. I taught myself the song on the piano that same day, recorded the cover in one-take, and submitted it—not having any expectations from it. Two weeks later, I got an e-mail from Interscope Records saying that I had won the contest and that they wanted to set up a meeting. That meeting led to a record deal, which led to me recording my first album, “Sinner or a Saint.”

LC: Some of your music has been featured on shows like MTV’S “The Hills.” How does that make you feel as a new artist?

TK: When you work in an industry that is constantly changing, new methods of getting your music out there for people to discover you becomes a crucial part of the process. My songs are upbeat and positive and I hope to find many more opportunities similar to “The Hills” sync as a way of exposing my music to new audiences.

LC: Do you write your own songs or music? What is your inspiration?

TK: I do write my own material and I find that process to be very therapeutic. I find inspiration from everything around me, from great music (such as Billy Joel and Paul McCartney), from great books, from inspiring films.

LC: How have you been involved in the Armenian community throughout your life?

TK: My Armenian culture has always been something that has been incredibly important to me. I speak the language and I am constantly looking for opportunities to better connect with the Armenian community. I hope to make a trip to Yerevan next summer.

LC: You’re a student at Columbia University. How has it been to balance school and your musical career?

TK: I deferred school for six years (I got accepted to UC Berkeley right out of high school) and decided last year that starting that chapter of my life was important. I started studying at Columbia last spring and feel honored to be a part of their incredible student body. I am studying creative writing because I want to constantly better my songwriting and my ability to write lyrics and poetry.

LC: You also have a blog (tamarkaprelian.tumblr.com) that deals with fashion, food, etc. What was your reason for starting a blog?

TK: I wanted for my fans and for people, in general, to get to know me on a different level outside of the music that I write and record. Starting my Tumblr blog was another way for me to remain creative and to share/blend three of my life’s passions: food, fashion, and music.

LC: Your new album is being released this week. (Congrats!) What was the experience of working on the album like?

TK: The amazing Xandy Barry, who produced my album “Sinner or a Saint,” produced this set of material. This EP is an honest, organic, and upbeat group of songs that hopefully takes listeners on a fun and visual journey.

LC: Lastly, what are your goals for the future, both musically and in general?

TK: To continue to do what I love for a living—writing, recording, and releasing new music.