Last week Armenia marked the Day of Armenian Missile and Artillery Troops. But that wasn’t the main factor that generated interest in the missile forces. The main interest was fueled by the unprecedented statement made by Armenia’s deputy defense minister about Armenia’s being ready to carry out strike against the oil and gas infrastructure of the “conventional enemy” in the event of the latter’s aggression. 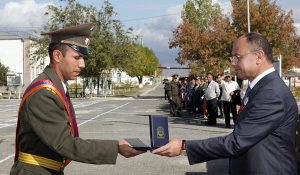 Major-General Artak Davtyan, commenting on the recent exercises of the armed forces of Armenia and Karabakh during which launches of missiles with a range of 300 km were simulated, stated that the missiles are aimed specifically to target [Azerbaijan’s] industrial infrastructure. He noted that the missile strikes would be of preventive nature and would be directed against specific sites: the oil, gas and energy infrastructure that supports the [Azerbaijani] economy.

In August 2010 Armenian Defense Minister Seyran Ohanyan, talking about the modernization of weapons, stated that in the future focus would be on the acquisition of long-range and high-precision weapons, as well as their domestic production. At a military parade in 2012 such weapons were shown.

The statements about the possibility of launching precision strikes were taken in Azerbaijan with anxiety. On the one hand, the fact that the great powers did not react to that was perceived in Baku as a message about the inadmissibility of renewed hostilities in Karabakh.

“Along with the exploitation of its oil and gas fields Azerbaijan has all the capabilities to ensure their security,” said head of the press service of the Defense Ministry of Azerbaijan Eldar Sabiroglu in a statement.

“As for the oil and gas infrastructure, it is shared by Azerbaijan with the major powers of the world and their companies. Besides, there are all the necessary forces and means of air defenses to protect that infrastructure. At the same time, the opponent must be reminded that the new missile system in Azerbaijan can reach any strategic facility in the territory of Armenia,” he added.

Azerbaijani expert Rauf Mirkadirov says that, in fact, “the matter concerns the destruction of the main elements of the Southern Energy Corridor, which should become a major factor in ensuring Europe’s energy security by reducing its dependence on Russia in this field.” Furthermore, in the expert’s view, it would be tantamount to a declaration of war by Armenia to Georgia. At the same time, he says, such missile strikes may be carried out only in the event of Azerbaijan’s aggression, which means that the blame for the destruction of the Southern Energy Corridor will be laid on Azerbaijan.

Meanwhile, in 2013 Azerbaijan has earmarked $3.7 billion for military spending. Experts point out that Azerbaijan is buying up submarines and boats, thus showing that the purpose of its armament is not only Armenia and Nagorno-Karabakh, but rather Iran and Turkmenistan.

The Armenian side says that its missiles, warnings, and large-scale exercises are intended to maintain stability in the region and prevent “adventures”.

“Exercises are an activity aimed at reinforcing peace and stability and our army is capable of enforcing peace,” says Armenian military expert David Jamalyan.

“The new military equipment of our army – anti-tank weapons, missiles, air defense facilities, armored vehicles – all this can deter aggression of the enemy,” says Jamalyan. He added that special equipment had been installed to allow aircraft to enter the airspace of Karabakh from Azerbaijan.

Recently, the US-based Center for Military Analysis, IMINT, also published information and made a satellite photograph showing that in the Syunik province of Armenia there are two units of S300 air defense systems. Thus, the Armenian Armed Forces have taken under their protection the entire airspace of Nagorno-Karabakh.