President of Armenia arrives in Japan on an official visit 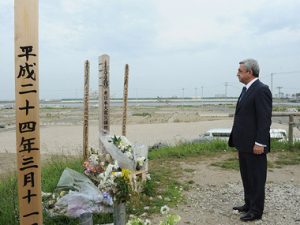 Paying respect to the victims of the Tsunami

As the correspondent of Panorama.am from Japan reports, President has visited Yuriage-Hiyoriyama Memorial in Sendai city and has paid tribute to the memory of the tsunami victims. Serzh Sargsyan has familiarized with the works aimed at the elimination of the consequences of the natural disaster, afterwards he has visited the temporary lodging of tsunami sufferers and met the inhabitants in Natori rehabilitation center.

As the press office of the President reports, the President has greeted the sufferers of the disaster in Sendai city on his and his delegation’s behalf and has conveyed the sympathy of the Armenian people towards them. He has mentioned that, one year ago Armenia was shocked with the news about the earthquake that hit Japan, and was praying for the people of this country.

“Requiem Mass was served in St. Grigor Lusavorich (Grigor the Illuminator) church in Yerevan during those days. Thousands of Armenians joined the prayers of the Catholicos of All Armenians and prayed for the memory of all the victims.

We realize and understand the whole weight of that natural disaster. You have lost many relatives and friends and I bend in front of their memory,” Serzh Sargsyan said.

He has also noted that the thankful Armenian nation has never forgotten the assistance of the friendly Japan shown in 1988, when Armenia was passing through many hardships in the same time overcoming the consequences of the devastating earthquake. Serzh Sargsyan has expressed his confidence that the Japanese who have faced many difficulties throughout the history will overcome this one as well and the Japanese government together with the people will be able to diminish the consequences of the disaster.

“Japanese people will become stronger at the end of this hardship. I wish everyone could return his home, children’s cry could be heard in the homes, the families grew with warmth and peace,” Serzh Sargsyan said.

As the Panorama.am correspondent reports, afterwards Srezh Sargsyan has walked around the reconstructed airport of Sendai with the director of the airport Mr. Itoni. They have stopped in front of one of the walls where the pictures show the consequences of the horrible earthquake.

At the end of the meeting, our correspondent says, they have exchanged presents with the inhabitants of the little community. The RA President has presented the handmade work of the children of Armenian Japanese center and has received Japanese origami. The meeting was very exciting, respectful and full of jokes.

Later Serzh Sargsyan left Sendai for Tokyo where he will have meetings with the Japanese leadership on June 6. They will also visit “Toshiba” science museum.