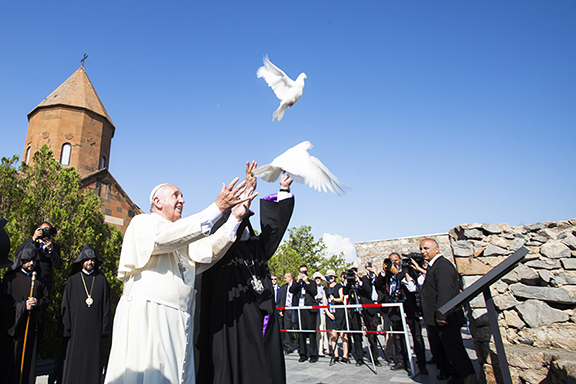 ETCHMIADZIN, Armenia—Pope Francis concluded his historic visit to Armenia Sunday by releasing doves toward the direction of Mt. Ararat after praying at Khor Virab, taking part in Sunday Mass and signing a joint declaration with His Holiness Karekin II, Catholicos of All Armenians.

The pope kicked off his last day in Armenia by meeting with the Catholic bishops of Armenia at the Apostolic Palace in Etchmiadzin, following which he took part in Divine Liturgy officiated by Catholicos Karekin II.

In his address, the pope called for peace in the Armenian Church, for “complete” communion, and prayed for “an ardent desire for unity” among Christians. The pontiff also urged the faithful to “listen to the voices of the humble and poor, of the many victims of hatred who suffered and gave their lives for the faith” and to the youth “who seek a future free of past divisions.”

“From this holy place may a radiant light shine forth once more, and to the light of faith, which has illumined these lands from the time of Saint Gregory, your Father in the Gospel, may there be joined the light of the love that forgives and reconciles,” said Pope Francis, as he called for Christian unity.

In his sermon, the Catholicos thanked the pope for his visit and urged the leader of the world’s more than one billion Catholics to remember the Armenian people in his prayers.

“On this graceful day we are appreciative for another opportunity to thank Pope Francis on the occasion of his brotherly visit. We and our people will always pray for you, beloved brother, and for your efforts made towards peace and prosperity of humanity and towards the advancement of the Church of Christ. May God give you strength, bless and keep firm our Churches in love and collaboration and may He grant us new opportunities for witness of brotherhood. In your daily prayers remember the Armenian people, the Armenian statehood and the Armenian Church and the Mother See of Holy Etchmiadzin,” said Catholicos Karekin II in his sermon.

Pope Francis, Karekin II Issue Joint Declaration
Also on Sunday, the pope and the Catholicos signed a joint declaration of thanksgiving for Christian unity and appealing for peace in the Middle East and other regions torn apart by conflict, terrorism and religious persecution.

In their common statement, the two patriarchs called for a peaceful resolution of the Nagorno-Karabakh conflict. The declaration also recalls “the extermination of a million and a half Armenian Christians, in what is generally referred to as the first genocide of the twentieth century.” In the statement, the two also pray for a change of heart in all who commit violence, as well as imploring leaders of nations to hear the cry of those people “who have urgent need of bread, not guns.”

The official signing ceremony preceded an ecumenical lunch with Catholicos Karekin II, archbishops, and bishops of the Armenian Apostolic Church, Catholic bishops of Armenia, and cardinals and bishops from the Papal entourage

Popes and Catholicos Visit Khor Virab, Release Doves toward Mt. Ararat
Pope Francis ended his three-day journey to Armenia by visiting Khor Virab monastery, where St. Gregory the Illuminator was held prisoner for preaching the gospel if Christianity, which was adopted as Armenia’s state religion following his release.

At Khor Virap, the Pope lit a candle at the “Well of Saint Gregory,” before praying at the nearby chapel. After emerging from Khor Virab, the pope and the Catholicos released two white doves toward the direction of Mount Ararat.

On Saturday, the pope had said that it was an honor to be on “these heights where, beneath the gaze of Mount Ararat, the very silence seems to speak. And where the ‘khatchkar’–the stone crosses–recount a singular history bound up with rugged faith and immense suffering. A history, he went on to say, replete with magnificent testimonies to the Gospel, to which you the Armenian people are heirs.”

The Pope left for Rome from Zvartnots Airport, where a farewell ceremony was attended by President Serzh Sarksiain, the first lady, Rita Sarkisian, the Catholicos and leaders of the Catholic community in Armenia.