Of Ruins and Renovations: Documenting Cultural Destruction in Turkey

I recently returned from my fourth trip to Western Armenia in the last 18 months. These journeys are emotionally draining. I am not sure I could make these trips alone; it is critical to have good people, good friends, with you. Fortunately, that was the case for me again this time. 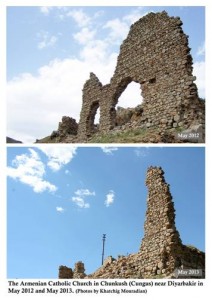 There are several reasons for subjecting myself to the difficult experience. Some are easier to put in words than others—like visiting my grandparents’ villages and doing field research for my demographic studies. In this article, I attempt to convey some of my experiences from the trip—as it helped me better understand my motivations.

Our first full day in Van jolted me emotionally in an unexpected way. After visiting the Van fortress, Varagavank, and Garmravank, we were returning to the hotel when I requested making a detour to a place I had visited once before, 17 years ago, on my very first trip to Western Armenia.

The village of Artemid was at one time a thriving village of Armenians dating back to the pre-Christian era. When I visited the village in 1996, the ruined church was being used as a barn, and a cemetery with some Armenian inscriptions remained. On that day in 1996, I saw two recently dug up graves, and could clearly see the jaw bone of one of the deceased. Turkish soldiers who had taken a keen interest in why I was photographing such things made my experience even more unpleasant.

This time, there was no cemetery. In the 17 years since I was last there, a road had been built right through the middle of it leading to new apartment buildings on the hillside. None of the gravestones with Armenian inscriptions remained.

It was raining now and my friends and I slogged through thick mud in search of any evidence: a faint cross here…squared stones there that may mark graves. As the rain came down, I took off my hat and let it wash over me. My friend asked, “Are you ok brother?” Truthfully, I was not.

We went back to the church and found that it had been “renovated” in 2007. It now looked more like a military bunker than a church. Again, I was not ok.

Why? It is not like the church had previously been extraordinary or the cemetery had been in pristine condition. Yet, something that I had not fully understood was starting to percolate in my mind. Earlier that day, when visiting Garmravank, my friend had noted that a new hole had appeared at the entrance since he had been there only six months prior–likely by treasure seekers still searching. 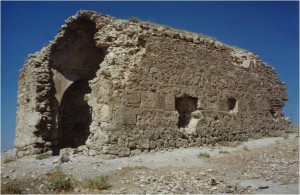 Two days later, we were in Chunkush and my companion from all four trips, Khatchig Mouradian, was struck the same way I had been struck in Artemid. The wall of the Catholic church there, already in ruins, had collapsed almost entirely since last May when we saw it last. For months, Khatchig had a photograph of himself at this scenic location on his Facebook page, and now what had already been in ruins was more so—and it was jarring.

Two days later still, we once again visited my grandfather’s village of Sakrat. In this village remains one lone wall from the church, the archway where the altar once stood. This was my third time in Sakrat, and as I stand before the altar my first thoughts are always that on that spot my grandfather was baptized 100 years ago. This year, after Garmravank…after Artemid…after Chunkush, I thanked the man who now owns the property for preserving that archway and told him I will be back. 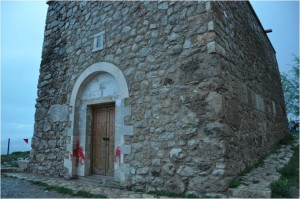 When we had been in Varagavank, the caretaker had indicated that there had been significant damage from the earthquake. I had not understood just how much until I returned home and compared my photographs to those on the internet taken by others.

So yes, little by little, with the passing of time, our heritage is being destroyed, either purposely or by nature. It would be simplistic to say that I go to document these precious monuments to our existence on our lands before they are all gone. It is more than that. I do think there is a message there for the people currently living in these areas. It is important for them to know that we still are attached to the land and the culture. We will return again and again. We are grateful when our heritage is preserved and held in proper reverence, like Varagavank, and we will take note when they are not, like Garmravank and Artemid.