No sign of end to Armenian enclave dispute on the horizon

The Azeri-Armenian conflict is still unresolved 24 years on, writes DANIEL McLAUGHLIN in Stepanakert

ROBERT BAGIRYAN’S slight frame stiffens and his shoulders straighten when he talks about what went before and what he is willing do again.

“It was very hard during the war. The whole city was being bombarded and people lived in their basements, but we live freely now and will defend that to the last. Whatever it takes.”

Bagiryan was a tank commander in the 1988-1994 war that saw his ethnic Armenian people in the region of Nagorno- Karabakh break away from Azerbaijan and declare independence.

Manya Jafarguliyeva, who fled Nagorno- Karabakh during the 1988-1994 conflict, in her apartment in the Azeri capital Baku. Photographs: Daniel McLoughlin

The fighting pitted neighbour against neighbour, as amid the chaos of the Soviet Union’s collapse, Nagorno-Karabakh’s majority Armenians demanded an end to alleged Azeri discrimination and the creation of their own state, high in the Caucasus mountains close to Iran.

At different times, regional powers Russia and Turkey were drawn into the battle between Azeri forces and Nagorno- Karabakh’s rebels backed by the Armenian military, in a war that killed about 30,000 people and forced more than one million from their homes.

Twenty-four years after it began, the conflict is still unresolved, no peace deal has been signed, the world still officially sees Nagorno-Karabakh as part of Azerbaijan and Armenian and Azeri soldiers regularly exchange deadly fire across a tense and heavily mined ceasefire line.

As sabre-rattling around Iran stokes fears of unrest in the region, Nagorno-Karabakh will be discussed on Friday in Dublin, when Ireland hosts a high-level conflict resolution conference as chair of the 56-nation Organisation for Security and Co-operation in Europe (OSCE).

The OSCE mediates in talks to end the conflict, but in the sleepy, tree-lined streets of Stepanakert, the mountain-ringed main town of Nagorno-Karabakh, many people see renewed war as more likely than lasting peace.

“The Azeris bombarded us relentlessly, it was a time of terrible stress and the kids were traumatised,” says office worker Gayane Danilyan (50).

“We couldn’t live with the Azeris again. It’s impossible. All trust has been lost.”

Nagorno-Karabakh and its sponsors in Armenia say the regional assembly’s 1988 vote to break away from Azerbaijan was in line with Mikhail Gorbachev’s liberalised Soviet laws; Azerbaijan insists it was an illegal attempt to change borders and destroy Azeri territorial integrity.

In the late 1980s and early 1990s, the row over Nagorno- Karabakh, which is deeply rooted in the history of both Christian Armenia and Muslim Azerbaijan, fuelled virulent nationalism in both republics, vicious pogroms and allegations of ethnic cleansing.

After initially gaining the upper hand and besieging Stepanakert, the Azeris were forced back until Armenian troops took Nagorno- Karabakh and seven adjoining regions of Azerbaijan.

THE RESULT is that much of Azerbaijan’s internationally recognised territory is controlled by Nagorno-Karabakh’s rebels and their Armenian allies, and about one million of Azerbaijan’s nine million people were displaced by war – one of the highest such proportions in the world.

“We all dream of going back,” says Abbas Aliyev (66), in the 25sq m room he shares with seven relatives in a dilapidated district of the Azeri capital, Baku.

“Our children went to school here and are settled here, but we always tell them – and our grandchildren – about Nagorno- Karabakh and our village. They know it is their homeland.”

Energy-rich Azerbaijan has spent billions of euros on its displaced people, paying benefits, subsidising utilities and gradually moving them into new apartment blocks like the one that is home to Manya Jafarguliyeva (59).

“We fled across the Aras river into Iran and then crossed back into Azerbaijan and came to Baku,” she says, adjusting the black headscarf that she wears in mourning for her husband.

“We lived for 10 years in some bad places, unfinished buildings. Then we moved here. This flat is nice, but we are still not used to life in the city. We miss working on the land and in our gardens. We miss the mountain air and water.”

Dashqin Shamiyev (38), a community leader in Jafarguliyeva’s district, has no doubt he will go home.

“With my passport I can travel anywhere but my own homeland. It is our land and we will return, our president has assured us of that. We hope for peace, but if it takes a war to solve the problem then so be it. I fought before and would do so again. Everyone of fighting age would sign up.”

ARMENIA ACCUSES Azerbaijan’s president, Ilham Aliyev, of using bellicose rhetoric to boost support for his autocratic regime. He became president in 2003 following the death of his father, who had stabilised Azerbaijan after events in Nagorno-Karabakh fuelled a period of political chaos.

The dispute poisons every aspect of relations between the neighbours: Armenia has withdrawn from next month’s Eurovision Song Contest in Baku because Aliyev recently called Armenians the greatest enemy of his country.

Cash-strapped Armenia feels threatened by Azerbaijan’s rapid modernisation of its military and by pressure from Turkey, Baku’s main ally, on its closed western border.

Azerbaijan is offering its rebel region the maximum degree of autonomy and wants Armenian troops to leave areas adjacent to Nagorno-Karabakh as a first step towards peace. Armenia claims that is impossible until its safety and status are assured by a final agreement. 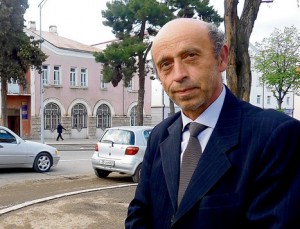 Both states claim the moral high ground over this remote and beautiful region. Baku says its territorial integrity is inviolable and Yerevan defends the Karabakhis’ right to self-determination.

The name of this place bespeaks its tangled history – “nagorno” means “mountainous” in Russian, “kara” is Turkish for “black” and “bakh” is Persian for “garden” – but its 100,000 people are clear on the future: only independence or unification with Armenia will do.

“Life isn’t easy here, but at least we live in our own state and feel free,” says Armene, who with her friend Donara sells traditional herb pancakes in Stepanakert market.

“We spilt our blood to escape Azeri control,” he says. “If they try anything again they’ll get what they deserve. They will regret it.”