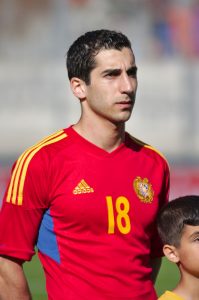 Manchester United are close to completing Mkhitaryan’s signing from Borussia Dortmund after the clubs agreed to a £26.3 million fee (approximately $34,650,000 USD), according to the report, which adds that Mkhitaryan will undergo a medical by next week before finalizing the deal.

Mkhitaryan has a year remaining on his contract with Dortmund, but has decided to play in the Premier League rather than sign a new contract.

Mkhitaryan could have a huge impact under Coach Jose Mourinho next season alongside Swedish superstar Zlatan Ibrahimovic, who is also close to a deal with the English club, writes Manchester Evening News soccer writer Samuel Luckhurst.

“Mkhitaryan, a potentially pricey signing for a player about to enter the last year of his contract, will doubtless be tasked with solving [Manchester] United’s playmaker problem but is unlikely to operate in a fixed position,” added Luckhurst.