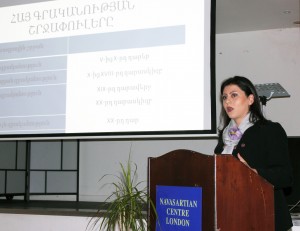 The lecture by Dr Silva Allahverdian jointly organised by HOM and Hamazkayin on 21st August 2015, at the Navasartian Centre in London was one of the best programmes presented in London, dedicated to this year’s Commemorations of the Centenary of the Armenian Genocide. The content of this presentation was in real harmony with the occasion of Armenian Genocide Centenary: “The Tragic and Heroic Image of Women in the Armenian Literature”. The presentation was of high educational value, delivered in high level Armenian and was depicting the richness of Armenian language modern vocabulary and academic terminology. At the same time, knowing her audience, the speaker had wisely prepared the lecture accessible for non-academics and for those less familiar with the subject. I am sure the audience went home with many new things learnt.

Dr Allahverdian began discussing periodic divisions of the history of the Armenian Literature: from the 5th to 10th century as ancient or old period; from 10th to 18th century as medieval period; 19th and 20th centuries as new period and the 21st century as the contemporary period. She went on to explain that, following the invention of the Armenian Alphabet by Mesrop Mashtots, from the mid-5th century onwards the formation process began developing in three paths: 1) the task of translation of the Christian religious books and ancient philosophical texts into Armenian; 2) the movement of calligraphic scripture; 3) the formation of Armenian literature marked by illustrious figures such as Movses Khorene, the author of Armenian History; Koryun, author of a book dedicated to Mesrob Mashtots, his teacher, and later Yeghishe Vardabet, author of a historical book about the Vardanank war. We have to bear in mind that the Armenian literature of this period is mainly of historiography, hagiography, philosophical and of spiritual nature.

The speaker emphasised that some of the images of post-Christianity’s religious characters in Armenian Literature are rooted in and inspired by the Gods and Goddesses of the Armenian and Greek mythologies of the pagan period.

One of the outstanding figures of the Armenian Literature in the old period is Agatangelos. He was educated in Greece and familiar with the Greek school and ancient mythology. In his book on the history of the Christianisation of Armenia, Agatengelos portrays Khosrovadukht, sister of King Trdad. Khosrovadukht was the key person in rescuing Grigor the illuminator, the founder of Armenian Christianity, from the “Deep Pit”. She is highly honoured by Agatangelos as a person who the whole Armenian nation is indebted to for becoming Christian. The other works by Agatangelos include the history of 37 Hrispsimian virgin-nuns who escaped from Byzantium to Armenia but who later heroically faced tragic death ordered by King Trdad. This is the very first time that we come across the heroic image of female characters in Armenian literature.

Dr Allahverdian talked about another Armenian heroine and tragic female figure crystallised in Queen Parandzem. This character is masterfully portrayed in the novel “Samuel” by Raffi as well as in “King Pap” by Stepan Zorian. Parandzem was the wife of Arshak the Second, King of Armenia, who was treacherously captured and later murdered by Shahpour, the Sassanid king. After his arrest in Persia, his wife Parandzem, led a resistance against the Persian invasion for a long time but eventually was forced to surrender and she heroically faced her death. It was not made clear, though, if this character had also been portrayed by Armenian historiographers in their works in the old period.

For a number of times the speaker emphasised that talking about the heroic and tragic image of women in the Armenian literature is due to the harshness of the realities of Armenian history. This history is marked by numerous encounters with critical situations when Armenians were massacred and their homeland destroyed or they had to resort to fight until facing tragic deaths.

Coming to the medieval period of Armenian literature, the speaker began by Grigor Narekatzi. According to some experts he had ushered the renaissance of Armenian culture at least 3 centuries before the advent of European renaissance. This is, of course, a disputable argument. However, the fact is that Naraketzi was the first in Armenian literature who in his poems takes the daring step of referring to St Mary as a woman, attributing physical beauty to her in a direct way and not as a Saint. However, as a clergyman, Naraketzi was clever enough to end his poem by some cautious words: “We cannot come close to this image and touch her as she is a Saint. We can only worship her and touch the power of God within her.” Dr Allahverdian ended this section of her lecture by reading a few lines from the poem to give a flavour of what she was talking about.

Then we have Nerses Shnorhali in 12C portraying the image of Mother of Armenia in his book about the massacres of Armenian Christians in Yedesia. Based on this narrative we have a well-known and familiar image for Armenians. Mother Armenia is seated in the middle of a destroyed city mourning the death of her children, men and families. This is a visualisation of the catastrophy that befell the Armenian nation time and time again and which resulted in it becoming part of the nation’s subconscious. The culmination being the Armenian Genocide. This very image of Mother Armenia, after the emergence of Armenian armed resistance, was changed by holding a sword in her hand. This image is reconstructed in a huge statue at the top of a hill facing Yerevan.

The most important period of Armenian literature is from mid 19C to around 1920. This period began by the modernisation and secularisation of the Armenian written language by Khachatur Abovyan. This period encompasses the national resistance, armed struggle, national emancipation and the Genocide and ends with the establishment of Soviet Armenia. This historical period is marked again with tragedies, especially in Western Armenia. The works produced in this period are at the peak of Armenian literature. In the masterpieces created by Siamanto and Daniel Varouzhan in the Western Armenian literature we come across images of sufferings of Armenian women aggressively abducted, raped and killed. Then comes the Genocide when the whole Armenian population was murderously uprooted from Western Armenia and not only have we suffered from the loss of millions of lives but also the loss of great literary figures such Siamanto and Daniel Varouzhan.

In the literary works of this period we come across women who demand their men to take up arms and resist the oppression of Turks and Kurds. Although it goes against mothers’ nature as life givers and carers, we see women who are ready to sacrifice their sons for the freedom of Armenia. For instance, in the novels such as “Jalal el Din” and “The Mad” by Raffi, we see mothers who advise their sons to show force in defending Armenian lives and rights. Survival requires the fighting against oppression. In Western Armenian Literature, in his poem collection titled “Red (bloody) News from My Relative”, Siamanto (Atom Yarjanian) expresses surprise about the Armenian women who face their tragic situation in a heroic way and are ready to kill their own children to prevent them to be taken away by Turks.

40 years after the Genocide in the contemporary period of Armenian literature, Hovhaness Shiraz in his “Dantean Myth”, has allocated a whole section of his work to the heroic and tragic character of the Armenian woman. It is in the deserts of Deir el-Zor in the utmost inhumane conditions when death is close, an Armenian mother is teaching the Armenian alphabet to her children by drawing Armenian letters on the sand. The speaker finished her presentation by reading some lines from this piece.

In the Q & A following the presentation a number of questions were raised about the new Armenian spelling (invented by Armenian linguists in the Soviet period). Some of the members of the audience were unhappy with the slides made from the reproduction of Armenian ancient literature in new spelling attributing political motivations behind such moves. Dr Allahverdian noticeably was reluctant to enter this discussion and in response to such questions sufficed to say that she had studied in Armenia therefore her sources had been in the new Armenian spelling.

There were other questions showing the enthusiasm created by Dr Allahverdian’s presentation. One of the questions was that in the new period of Armenian literature in the novels dealing with then modern urban life and not extreme harsh and inhuman situations (such as massacres and the Genocide in Western Armenia) are there samples of female characters caught up in conditions that require heroic response? The answer was that quite similar situations are created in the works by Nardos, Shirvanzadeh and Mooratzan and there are female characters.