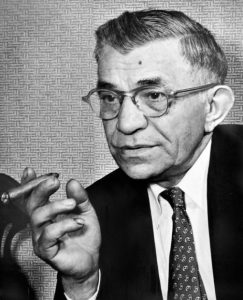 Five Armenian religious manuscripts traveled this week from Racine to Boston, where they are being donated to the Armenian Library and Museum of America. What makes these lengthy, large-format books unique is that every word in all five of them was carefully handwritten in the Armenian alphabet (invented by an Armenian monk in 405 A.D.), using imported pens, India ink and heavy parchment paper, in the 1960s.

What makes the books special to Racine is that they were created by one of the founders of St. Hagop Armenian Apostolic Church, Parseg Kashishian. Kashishian (1890-1970) came to America in 1920 and had dreamed of completing an entirely handwritten copy of the Bible since he was a boy of 12 in Armenia, according to those who knew him well.

Having lost his first wife and children to the Armenian massacres of 1915-16, Kashishian had lived in Syria and Istanbul before coming to Racine. It wasn’t until he had lived and worked here — as a castings grinder for J.I. Case Co. — for more than 25 years, though, that he truly had the time to pursue his childhood dream, according to Varteney (Var) Krikorian, whose late husband, Stephan, was Kashishian’s stepson.

There were days when the Armenian scribe labored as long as 14 hours on the manuscripts, copying from original religious texts. And while such highly concentrated work might have damaged some people’s eyesight, it seemed to have the reverse effect on Kashishian’s eyes, Krikorian said. “After three years of working day and night, his eyes had become so strengthened that he no longer needed glasses.”

All together, Kashishian completed seven religious manuscripts, which he gave as gifts to his relatives. One of them is now in the library of an Armenian church in Detroit, and another belongs to a great-niece of Kashishian’s living in Canada, Krikorian said. The other five, which are being donated to the museum, include a Mayr Mashdotz, or Complete Book of Rituals (copied from an original exemplar printed in Constantinople in 1807); an Avedaran Adeni, or Book of the Four Gospels (copied from an original exemplar printed in Jerusalem in 1899); two volumes of the Jashoo Kirk, or Book of Repasts; and the Avedaran Yiughaperits, or Gospel of the Oil-bearing Women.

Some of the books are covered in rich velvet and decorated with ornate silver panels, depicting various religious images. Krikorian, who remembers her husband traveling to Chicago to get the special pens and inks Kashishian needed for his work, said “Mr. K” would send his books to Istanbul to have the metal work done for their covers.

Each volume is a “masterpiece of patience and perseverance” for which Kashishian would spend about 24 hours hand-lettering each page, Krikorian said. She described his lettering as having “exquisite style, with graceful serifs and fine lines that look like the most expensive printing.” 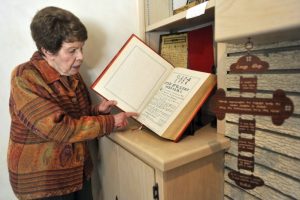 Gregory Shaver gregory.shaver@journaltimes.com Var Krikorian looks at one of the hand-written Armenian religious manuscripts created by Parseg Kashishian. Kashishian, who came to Racine from Armenia in 1920, had dreamed of completing an entirely hand-written copy of the Bible since he was 12. He completed seven hand-written religious book by the time of his death.

Kashishian’s manuscripts are also valued for their uniqueness, said Father Hrant Kevorkian, priest at St. Hagop Armenian Church, 4100 N. Newman Road. They are considered rare books because Kashishian is perhaps the only person in the time since printed books became widely available to create such hand-lettered Armenian manuscripts from original texts dating back to 1809-1810, Kevorkian explained.

“He is unique in having done that in this age,” the priest said.

One of the books, the Mashdotz, is especially rare because while the texts used today by Armenian clergy include the most commonly used services, this book contains every blessing, ordination, wedding and special service of the Armenian church, Kevorkian said.

“It contains every single, sacramental service we have in our church, starting with the birth of a child and going through to death,” he said.

Appraisals of the books being donated to ALMA, done by Leon Saryan, also credit Kashishian with being one of a few individuals worldwide who strove to keep the Armenian calligraphic art alive in the twentieth century.

“These books were copied by the scribe as a labor of love and respect towards God, His written word, and the incomparable heritage of the Armenian people,” Saryan wrote.

Krikorian, who along with her husband owned the Complete Book of Rituals, made the trip out to Boston this week to deliver the books, accompanied by Marybeth Zuhlke, also of Racine. Krikorian did so after what she called a “week of miracles” in which several other relatives of “Mr. K” contacted her to add their books to the donation. They are also taking other Armenian heritage items to the museum, including needlepoint work done by Esther Tcheordikian of Racine. And, on April 29, members of St. Hagop honored Kashishian at a special event at the church, celebrating the “Year of the Armenian Book” as declared by his Holiness Aram I Catholicos of Cilicia.

Krikorian said she has long wanted to honor Kashishian for his work and is “thrilled and happy” to finally be able to do so. Describing him as “a man ahead of his time,” she fondly remembers Kashishian for his kindness and generosity, as well as his skills with a pen.

Both she and Julie Der Garabedian, whose father was Kashishian’s cousin, recall how the scribe (one of the few people in their church to have a car then) would drive the congregation’s youth to Chicago for various events, and often give his time to help others. 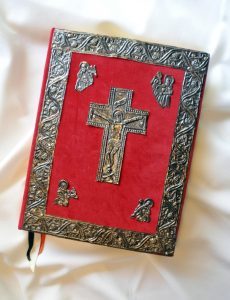 Kashishian sent his manuscripts to Istanbul to have the metal work done for the covers. Gregory Shaver gregory.shaver@journaltimes.com

“He was a very caring person and kind of a gentle giant,” said Der Garabedian.

Mary Jo Kaiserlian, who worked with Kashishian when she was in her mid-twenties, described him as “the sweetest gentleman you’d ever want to meet” and “very dedicated to his work.”

Kaiserlian, who has an art degree from Alverno College, was hired by Kashishian to copy some of the illustrations for his texts. At the time, she didn’t think much about the fact that she was drawing on the same pages that he was filling with his calligraphy because she didn’t realize what a treasure the books would become.

What Kashishian accomplished is even more impressive when you consider that he had come from a tiny village in Armenia, and had very little, if any, schooling, Der Garabedian said.

“He started out with nothing, and yet look what he did,” she said. “And, he was a very, very nice man.”

Copyright 2012 JournalTimes.com. All rights reserved. This material may not be published, broadcast, rewritten or redistributed

By Lee B. Roberts/The Journal Times