– Women in the World in Association with The New York Times

Kim Kardashian West, who is of Armenian descent, was so outraged when she saw a full-page ad
denying the Armenian genocide, published in The Wall Street Journal in April, that she decided
to do the same, and take out a full-page ad in the New York Times on Saturday. “For the
Wall Street Journal to publish something like this is reckless, upsetting and dangerous,”
Kardashian wrote in the ad, slamming the newspaper for publishing an ad that effectively denied
that 1.5 million Armenians were systematically murdered by the Ottoman government, between
1915 and 1916.  “It’s one thing when a crappy tabloid profits from a made-up scandal, but for a
trusted publication like WSJ to profit from genocide — it’s shameful and unacceptable.”

The reality TV star and entrepreneur went on to accuse the newspaper of deliberately spreading
lies, dismissing the newspaper’s explanation that they were merely publishing a “provocative
viewpoint.”  She continued her plea by asking the U.S. to formally recognize the genocide, and
urging Turkey to be held accountable for the actions of the Ottoman government. “When we allow
ourselves to be silenced by money, by fear and by power, we teach our children that truth is
irrelevant,” she concluded. “We have to be responsible for the message we pass on to our children.
We have to honor the TRUTH in our history so that we protect their future.
We have to do better than this.” 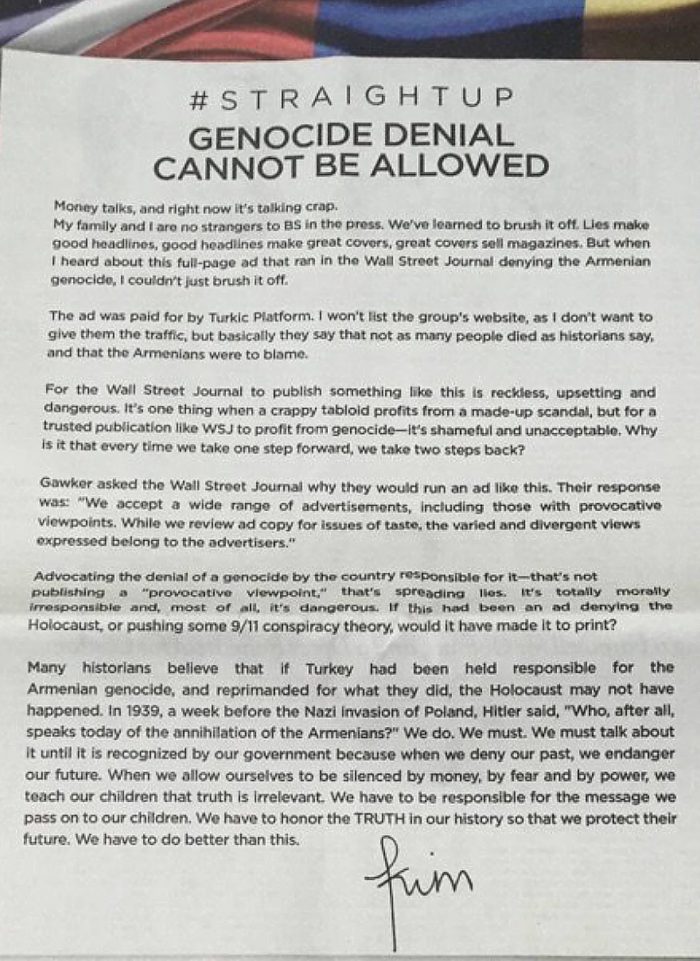