Tbilisi Armenians struggle to save their crumbling churches from neglect

The collapse of the bell tower of the Armenian St. Nshan Church in Tbilisi Sunday night again reminded the local Armenian community about the defenseless status that Armenian churches have in Georgia.

While the main reasons for the collapse is considered to be an earthquake that hit the territory a few days before as well as unprecedented showers during the past few days in the Georgian capital, specialists still consider that had repairs been done in time it would perhaps have been possible to avoid such a situation. The Armenian side has long accused Georgians of neglecting the condition of the church and sought to take possession of it in order to make all necessary restoration works. 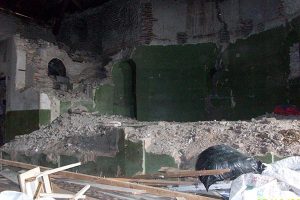 An estimated 300,000 ethnic Armenians live in Georgia where there are also more than 300 Armenian churches. Only 40 of these churches, however, are operating ones. St. Nshan Church is one of the six churches that are a matter of dispute between the Armenian Apostolic Church and the Georgian Orthodox Church (the others are St. Norashen, Mughnetsots St. Gevorg, Yerevantsots St. Minas, Shamkoretsots Surb Astvatsatsin (St. Mary) and St. Nshan in Akhaltsikhe).

Still in July where the status of legal entities was granted to a number of religious organizations operating in Georgia, including to the diocese of the Armenian Apostolic Church, it seemed that the situation would somehow be settled, however the poor condition of local Armenian churches still remains a matter of contention.

St. Norashen Church built in 1467 is in the center of Tbilisi (in Leselidze Street, the old Armenian market, sharing the yard with (former Greek) Orthodox monastery Jvris Mamis, has been locked already for many years. While the church still stands, the wide cracks on its walls do not bode well for the construction.

The Yerevantsots St. Minas Church, which was built in 1790 in Tbilisi’s Armenian Havlabar district is in an even poorer condition. Inside the walls of the half-dilapidated church almost nothing reminds of its former magnificent self. Today this church is more used as a storage for residents of the neighboring to keep their old, useless and forgotten items. Plastic bags with garbage are dumped on its altar.

“The diocese was registered as a legal entity, but now we must try to register all our churches and get them back in order to maintain them in good order. For this purpose we are drawing up a list of our churches with all historical bases,” says Fr. Vazgen, a local Armenian priest, adding that the matter concerns hundreds of cathedrals that do not function today, are in a half-ruined condition and have been Georgianized. 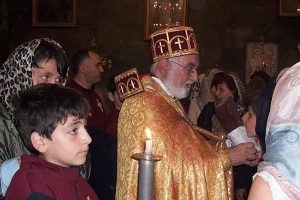 While the Armenian side is taking steps to recover its historical heritage, two Armenian churches in Tbilisi continue to function for the local Armenian community.

In one of Tbilisi’s central squares there is the St. Gevorg Church. Last Sunday it had attracted more people for the service than usual. The thing is that the Liturgy was performed by Fr. Tachat Davidian, who is the spiritual head of the Ararat Patriarchal Diocese’s Youth Association. A pilgrimage from Armenia to Georgia was organized on that occasion (with the author of this article accompanying the group).

Armenians of Tbilisi had been gathering in the church yard from early in the morning to attend the service.

“An Armenian always needs spiritual food, and the church, especially for those living outside Armenia, becomes a connecting link. It is very pleasant to guests coming from the homeland,” said 52-year-old Tbilisi resident Tariel Mirzoyan, who says he attends church every Sunday together with his grandchildren.

Fr. Samvel Torosyan, the priest at St. Echmiadzin Church in Tbilisi, told ArmeniaNow that in order to strengthen the link between the Church and the local Armenian youth a cultural and educational youth center called “Hayartun” had been established at the Armenian Church’s diocese in Georgia. There, he said, young ethnic Armenians are enabled to maintain their links to the homeland and keep their ethnic identity through participation in studies of the Armenian history, ethnic songs, dances, and other activities.