HOW WE CAN HOLD THE SOUTH CAUCASUS? 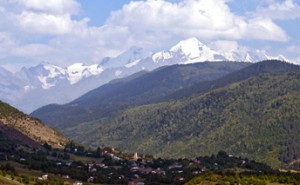 Arevagal: The following article by the former Russian ambassador to Armenia was written just before Moscow liberated South Ossetia and Abkhazia from Georgian/Western aggression. The commentary by the ambassador is a little insight into how Moscow views Armenia and its role in the Caucasus. The article clearly suggests that Moscow was feeling the urge to make a grande stand in the Caucasus. It also reveals that it views Armenia as a natural ally that needs to be preserved in the volatile region. Nevertheless, contrast the sound geopolitical reasoning of what you will be reading below with what high level American officials (not the ones that are tasked with giving our naive people lip service) have been saying about Armenia…

While these unrecognized states, namely Abkhazia and Nagorno Karabakh, are in danger of existence, there is wide disbelief that Russia has no effective measures left to restrain the advance of the USA and its allies on the post-Soviet terrain, which hurts Russia’s national and state interests. So far, Russian has been carrying on with the “mini-empires”, agreeing with their ridiculous proofs of ‘rights’ on the lands of neighboring peoples. These lands, which, in reality, until recently did not belong to them. I am confident that public and policy statements on the highest levels defending the sovereign rights of the smaller nations could spearhead negotiations between some former Soviet republics and their former autonomies on the structure of their new relations in a reasonable framework. But Moscow still refuses to do that. Nevertheless it is about time to learn to distinguish among the ‘real, true allies’, simply partner and those, who look at the other side. We should not be afraid to offer support to those whose interests coincide with ours.

It is significantly important to recognize that we are constantly being provoked to argue and undermine our relationship with our strategic allies. The Pro Azeri lobby in Moscow has been especially active in these attempts, doing all they can to drive Russia away from Armenia. These groups present the Turkish-oriented Azerbaijan as “the Russian basis in the Caucasus.” At the same time we are being threatened with NATO military bases on Apsheron and a new war against NKR, if the latter refuses to dissolve itself as an independent state and accept sham autonomy within Azerbaijan. Pro Azeri lobbyists use lies and scare tactics, hoping that our memories are short. Suddenly, the infamous Mutalibov has remembered the “tragedy of Khodjali, when in February of 1992 hundreds of civilians were slaughtered in Nagorno Karabakh as a result of a joint operation of the Armenian military groups and 366th motor-division of the Russian Army.” But back in 1992, Mutalibov himself had admitted that “the tragedy of Khodjali” was, in essence, a provocation carried out not by Armenians but by Elchibei’s bandits against his presidency (see his interview for NG April 2, 92). Why would Mutalibov remember the old lies of Elchibei propaganda now? The answer is clear: to destroy Russian-Armenian relations. Those feeding from the Azeri lobby push Moscow to help Azerbaijan to fulfill their plans of annexing NKR territory.

The protanganists throw an oft-used theory of alleged “Pro Western” orientation of the present Armenian government into the controversy. Yet, the official Yerevan line simply tries to diversify its foreign ties, which is a reasonable and most rational way of survival for Armenia. In the current circumstances, Armenia needs neither “pro Western” nor “pro Russian” orientation. But it needs a “pro Armenian” one. Russia should understand these nuances, in which it is not able to assist Armenia fully. For example, would Russia be capable of sustaining and providing regular humanitarian aid, that amounts to hundreds of millions of dollars, and which Armenia has been receiving from the USA for the past ten years now? An honest appraisal will ensure Russia’s stance in the South Caucasus. However, Russia still has other measures to strengthen its positions in the Transcaucasus. One of those is a military cooperation, including air defense and border patrol. In that region, we have such presence only in Armenia. Another lever is to own industrial and scientific property of strategic economic and social importance in a country. Again Armenia reappears, as we are currently conducting negotiations on these issues with the state government. A third way is to effectively use the patronage offered by Russia to the Armenians, in the Karabakh question. This should be done without any fear of confrontation with Turkish-Azeri pressure, conflicting with our interests, for it is strongly connected with the far-fetched plans of pan-Turkism.

The words of the Russian President, uttered in Yerevan in September 2001, hold a special importance in light of these circumstances, i.e.: “the whole policy of Russia in the region will be directed to provide a reliable defense for Armenia;” and that the solution of the Karabakh problem should be coming out of the present status quo, by which “Russia, should not disturb the established balance between Armenia and Azerbaijan.” I believe that to be the position conforming to the Russian strategic interests. We should rid ourselves of the bad habit of taking on trust everything that Azerbaijan says. Here, we do business with a partner, who promises undying friendship to Moscow and acts as a complete vassal of Turkey in Ankara and conductor of pan-Turkism at home. Once we attempt to meet their interests and give up Karabakh to them, they will not need us, for the pan Turkism orientation of Baku is rooted deeply in its body.

All of this is not a call to stop having any business with Azerbaijan and impose any sanctions on the country. There are about three million citizens of Azerbaijan, who live and work in Russia. Some of them have become Russian citizens. Moreover, Azerbaijan is our neighbor. A neighbor should be treated in a friendly, neighborly way, despite the fact that it behaves otherwise. It is important to promote trade, cultural exchange and cooperation in possible and profitable areas. Nonetheless, we should not close our eyes and ignore its true goals, especially if they contradict the Russian interests. Armenia has been our strategic ally from the beginning and until the present day. Therefore we should act towards it in an appropriate fashion. We should be considerate of Armenia’s interests and Karabakh’s interests, for without Karabakh there is no independent and friendly Armenia. Furthermore, without the Armenians, Russia would not have any positions in Transcaucasus. My idea of Karabakh’s protectorate evolves exactly from that logic: we simply ought to protect Karabakh, assist in all possible ways to strengthen its security on its historical territory; that had its borders distorted by the Russian Bolsheviks, demanding restoration now. The entirety of NKR, deserves no lesser respect than entirety of territories of any other state.

In my view, the true settling of the Karabakh conflict suggests complete rejection by Azerbaijan of the primal Armenian lands. It is possible to resolve the problem of the refugees by providing them with opportunities in places where they live now. How come in almost every discussion on Karabakh the only refugees that are being consistently mentioned are the Azeri refugees? Why can’t the Armenians return to Baku, Gyandja, Sumgait, Artsvashen, Getashen, etc.? It seems to me that the most optimal resolution of the Karabakh problem is to legitimize the status quo within the borders on the confrontation lines, set by the truce of 1994. Aside from the war anything else is simply unrealistic. Azerbaijan pretty much hopes for a war. However, a war is not going to deliver anything good neither to the Armenians, nor to the Azeri people.