How an Army of Bears Is Saving a Town

In the town of Berd in northern Armenia’s Tavush province, a group of women knit little arms and legs, strawberry-shaped torsos, round heads, and half-moon ears and snouts. When all the pieces are stuffed and attached, plump little bears stare back and smile. These are the Berd Bears, a small army of cuddly pals that could change the lives of their creators.

When Arkansas native John Hart moved to Berd as a Peace Corps volunteer two years ago, his mission was to help develop the information technology (IT) in the region. He began working at Berd IT, a small company with a handful of employees. His job description constituted fixing computers and teaching planning skills. As time went on, he veered towards working with women’s and youth centers. Upon his return from the women’s centers in Gapan, Meghri, and Goris, he approached his co-worker, Anahit Badalyan, with an idea. “I said, I think perhaps instead of trying to do women’s projects under an IT banner, maybe we should start our own, Berd’s women’s organization—our own women’s resource center,” he told me. Within around three months, in February 2011, the Berd Women’s Resource Center Foundation (BWRCF) was established.

Around this time, Hart met Timothy Straight, honorary consul of Finland and Norway, and the founder of Homeland Handicrafts, an organization that supports job creation in rural Armenia, especially for women. Hart had a plan. “Unlike the other women’s centers that were using Homeland Handicrafts projects to develop funds, we were thinking of using it to develop membership,” Hart explained.

In March 2011, Straight visited Berd, and met with the two-dozen or so women who had assembled at a local school. The women sat around a stove at the center of a cold classroom. They showcased an array of intricately made crafts, from embroideries to tablecloths to carpets. The knitted bear, however, made by a woman named Seta, caught Straight’s eye. “I distinctly remember saying, ‘All of you, one year from now, will be doing something related to the teddy bear,’” he recalled, as Hart and I sat in a Yerevan café, surrounded Berd Bears Straight had brought along.

Berd is a mere nine kilometers away from the Azerbaijani border. The town was once a regional center, with a population between 12,000 and 14,000. Today that number has been slashed roughly in half. “The conflict came; the border closed; all trade stopped; and the jobs disappeared,” said Straight. “The choice basically is: become a hired soldier at the border and be shot at for $400 a month, or emigrate to Russia.”

Women have even fewer choices. They are primarily mothers and wives. Some are teachers, post office workers, or nurses. Most, however, are unemployed. 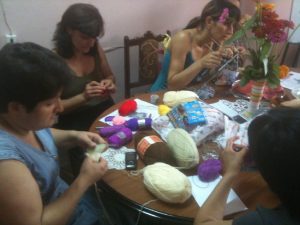 Hart realized the impact the bears were having on the women when one of the knitters pulled him aside one day and said, “I used to sit at home, wondering how I was going to pay for my kid’s medicine. Now, I sit at home and knit to pay for his medicine.”

Knitting teddy bears was first introduced 10 years earlier as a communal pastime by Sister Hannah, a German missionary nun, now 80, whose work with Armenians began in her youth in Anjar, Lebanon. The Berd women would knit during their get-togethers. After Sister Hannah left, the women continued making the teddy bears. “We went from 3 people making those bears for each other to 30 employed women today employed. And we have another 30-40 waiting to be employed if we can expand the sales of the bears,” said Straight, who added that within the past year, up to 400 Berd Bears were sold.

“Tim, is this project going to continue?” the women occasionally ask.

“They don’t believe that it will continue,” Straight said. “They don’t believe that it’s something permanent, that it’s something that will provide an income through time. They worry about this disappearing because everything else in their grown-up lives has: the Soviet Union disappeared; their jobs disappeared; many of their houses disappeared—in the villages at least.” Straight feels the pressure to provide them with a sense of permanence, but he is also realistic. “We can’t know that we are going to be able to sell another 500 or 1,000 teddy bears in the next three months,” he said.

However, Straight is doing his best to secure orders. Almost two months ago, Berd Bears was launched on Kickstarter, a crowd funding website, by the initiative of New Jersey resident Laura Bilazarian. Within the first 24 hours of being on the site, they had already sold $5,000 worth of Berd Bear products. By June 26, with only a few days remaining on the site, they had passed the $11,000 mark. The prices start at $55, which includes overseas shipping, and go up to $100 plus, for a design-it-yourself bear. “We’ve done a Chicago Bears uniform, bears wearing different uniforms, national costumes, and flags,” noted Straight.

“You need to believe in the story behind this teddy bear,” he continued, pointing at one of the teddy bears displayed on the table. “It is an excellent teddy bear. It is a high-quality teddy bear, but the maker is what makes this teddy bear special. It’s an amazing story, about an amazing group of women, and the series of coincidences that led people to Berd…”

“It is an excellent teddy bear. It is a high-quality teddy bear, but the maker is what makes this teddy bear special.

About half of the profits go to the knitters, who get paid 440 drams an hour, or $160 a month if they work full-time, which—in Straight’s words—“in a village in Armenia today, is quite a decent salary.” Around 15 percent of the profit supports BWRCF projects, such as reproductive health and domestic violence awareness. A percentage covers raw materials, including the imported joints and eyes that meet safety standards.

Straight envisions a contract with an upscale toy store in the U.S., with a steady flow of orders. “This is not about sympathy, this is not about feeling sorry for these women, or feeling sorry for Armenia,” he said, adding that his purpose is to empower the Berd women. “If an upscale toy store in the U.S. were to latch on to this and make it a permanent thing, and order 1,000 bears every three months, that’s when my job is done. It’s all for the women, so that they can go and have a happy life. I would really like them to have their own customers in Australia, Europe, and the U.S.”

From stuffed teddy bear to a TV show

Straight’s efforts to popularize the bears took on a new form when he approached his friend and animator Vrej Kassouny. “We have environmental issues in Armenia, and we have job creation issues—can’t we just combine those somehow? Can you make an animated television series that has these teddy bears as the heroes of this television show?” he remembers asking Kassouny.

Kassouny agreed. He created the characters of Archo and Arsho, two bears; Gargar the crow; Meghou the honeybee; and Titer the butterfly. Now the phase of finding funding for the show’s production is being strategized. There already have been interested parties in Russia, France, and the Middle East. If all goes according to plan, the Berd women will have a lot on their plate—in a good way.

“We will need to start making these bears, and the honeybee, and the butterfly, and exporting them to those countries. It’s going to be dizzying for the women in Berd,” smiled Straight.

To learn more about the Berd Bears visit them at www.BerdBears.com or support them on Kickstarter. http://www.kickstarter.com/projects/525757888/berd-bears-old-world-meets-new (they will be featured on Kickstarter until July 1, 2012).