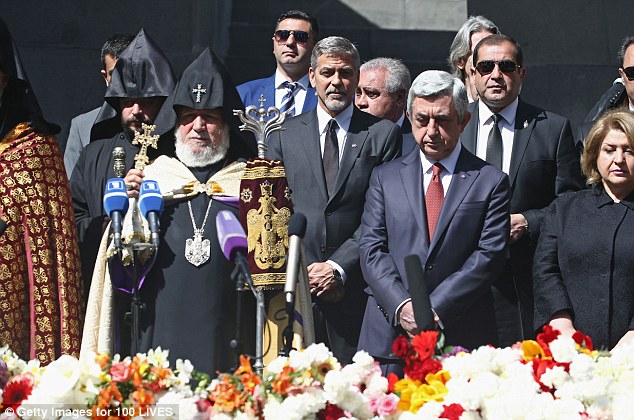 YEREVAN, Armenia — Actor George Clooney presented a $1.1 million award on the 101st anniversary of a massacre of Armenians by Ottoman Turks to a Burundi woman who offered sanctuary to thousands of orphans in the middle of a civil war there. 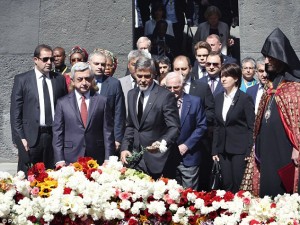 The killing of more than 200 Armenian intellectuals on April 24, 1915, is regarded as the start of the massacre that is widely viewed by historians as the first genocide of the 20th century in which they estimate 1.5 million Armenians were slaughtered.

Turkey, the successor to the Ottoman Empire, vehemently rejects that the deaths constitute genocide, saying the toll has been inflated and that those killed were victims of civil war and unrest.

Clooney presented the first Aurora Prize, an award recognizing an individual’s work to advance humanitarian causes, to Marguerite Barankitse, who saved thousands of lives and cared for orphans and refugees amid the Burundi civil war. Armenian philanthropists selected her for the award.

Clooney has been a prominent voice in favor of countries recognizing the killings as genocide, which the U.S. hasn’t done.

More than 400 people gathered in Yerevan, Armenia over the weekend for a series of events marking the presentation of the inaugural Aurora Prize for Awakening Humanity. The Aurora Prize was presented to Marguerite Barankitse from Maison Shalom and REMA Hospital in Burundi, who introduced the Fondation du Grand-Duc et de La Grande-Duchesse du Luxembourg, Fondation Jean-François Peterbroeck (JFP Foundation) and the Fondation Bridderlech Deelen Luxembourg – the organizations she selected as beneficiaries of the $1 million award. 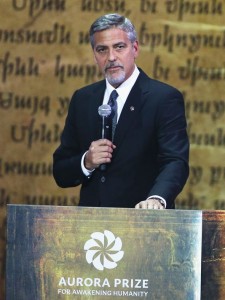 The Award ceremony marks culmination of weekend of events held in Yerevan bringing together international humanitarians, academics, media experts and former statesmen to celebrate humanity and discuss the world’s most pressing humanitarian challenges.

“This Prize is consolation for the whole of Burundi’s people. Having such an amount of money will go toward helping mothers so that they can get microcredit and feed their children,” said Aurora Prize Laureate Marguerite Barankitse. “Being awarded with this Prize also means being able to send a significant amount of children to school, and helping the young people who got injured, mutilated, or who are in hospital in Kigali go back to university. I am very grateful.” 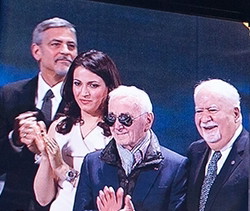 The Ceremony, which included the music of Serj Tankian and Charles Aznavour, acknowledged the work of the four finalists. Alongside Aurora Prize Laureate Marguerite Barankitse, Dr. Tom Catena of Mother of Mercy Hospital in the Nuba Mountains of Sudan, Syeda Ghulam Fatima, the General Secretary of the Bonded Labor Liberation Front in Pakistan, and Father Bernard Kinvi, a Catholic priest in Bossemptele in the Central African Republic were also honored.

To mark the occasion of the inaugural Aurora Prize, it was confirmed that the three other finalists will be presented with $25,000 from the Aurora Prize co-founders to support the organizations that have inspired their work.

Also presented was the newly launched International Center for Journalists Integrity in Journalism Award in partnership with the Aurora Prize. Awarded to journalists dedicated to attracting the world’s attention to humanitarian crises, the Award was given to The New York Times correspondent Rukmini Callimachi for her exceptional contribution to exposing crimes against humanity. 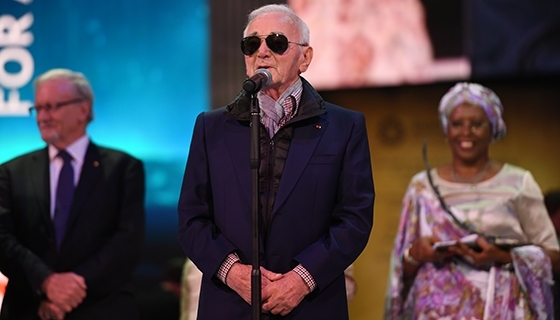 Earlier in the weekend, representatives from the international humanitarian community joined the Aurora Dialogues, a day-long conference promoting meaningful discussion of the most pressing humanitarian challenges taking place today. Participants included members of the Aurora Prize Selection Committee, such as Former United Nations Special Representative of the Secretary-General on Human Rights Defenders Hina Jilani, Human Rights Lawyer and Iran’s first female judge, Nobel Laureate Dr. Shirin Ebadi, and President Emeritus of the International Crisis Group Gareth Evans. The state of humanitarian issues, the global refugee crisis, the role of women in the humanitarian community, and the role of the media in bringing humanitarian crises to the world’s attention were among the subjects discussed.

During the Aurora Dialogues, the Humanitarian Index, a specially commissioned study on public perception of top humanitarian issues among 4,600 people in the U.S, U.K, France, Germany, Lebanon, and Iran, was introduced. The survey revealed the extent of the global disconnect between perception and reality of the refugee crisis, exploring respondents’ opinions on need and responsibility for international intervention in the face of adversity. 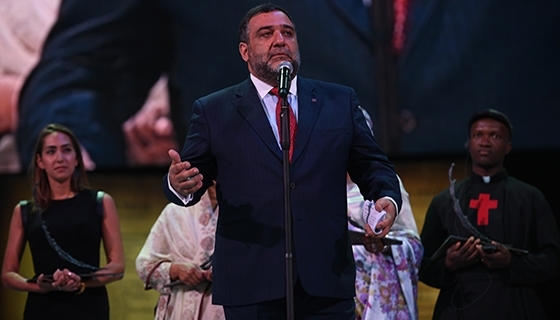 The Aurora Prize for Awakening Humanity was founded by the pioneering global initiative 100 LIVES, launched last year to express gratitude for those who helped Armenians survive the Armenian Genocide a century ago. 100 LIVES honors the human spirit by championing individuals and organizations that demonstrate that same spirit of selflessness to enable others to survive and thrive today.

“The simple truth is that all of us here tonight, are the result of someone’s act of kindness,” said Aurora Prize Selection Committee Co-Chair George Clooney during his remarks to the audience. “We all stand on the shoulders of good people who didn’t look away when we were in need. It might have been 101 years ago or it might have been last year. If we are to survive as a people we simply can’t look away.”

Other highlights from the weekend included:

Additional information on the Aurora Prize for Awakening Humanity, including the selection process, the four finalists and their championed causes, the inspiration behind the prize, background on the co-founders, and images and videos from this weekend, can be found on the website at www.auroraprize.com.

100 LIVES is a new global initiative rooted in the events of the Armenian Genocide, during which 1.5 million Armenians perished. The fortunate few were saved by the courageous and heroic acts of individuals and institutions. A century later, 100 LIVES seeks to express gratitude, to share remarkable stories of survivors and their saviors, and to celebrate the strength of the human spirit.

100 LIVES is an initiative of the IDeA Foundation (Initiatives for Development of Armenia), a charitable foundation committed to promoting socioeconomic development in Armenia through investments in long-term, non-profit projects.

About the Aurora Prize for Awakening Humanity

Recipients will be recognized for the exceptional impact their actions have made on preserving human life and advancing humanitarian causes. On behalf of the survivors of the Armenian Genocide and in gratitude to their saviors, an Aurora Prize Laureate will be honored each year with a US$100,000 grant as well as the unique opportunity to continue the cycle of giving by nominating organizations that inspired their work for a US$1,000,000 award.