Forgotten Rutgers prof who coined ‘genocide’ now getting his due

It was the “crime without a name.” But Raphael Lemkin gave it utterance.

“Genocide” was the word Lemkin coined in 1944, as Allied troops were just beginning to discover the death camps and mass graves left behind by retreating Nazi forces.

Lemkin, a Jew who fled the Holocaust on foot through Polish forests but who lost more than 40 members of his family to it, was short-listed for the Nobel Peace Prize twice in the 1950s, after he pushed the United Nations to outlaw the “crime of all crimes.”

He taught at Rutgers and Yale universities. But he neglected himself, becoming an ill and destitute and obsessed man who dropped dead on a New York street at 59. Only a handful of people attended his funeral, and he sank into obscurity, a historical footnote. Much of his later life remains shrouded in mystery, including his short stint at Rutgers’ Newark campus teaching international law.

But as Genocide Awareness Month again marks the mass exterminations of Armenians, Jews, Rwandans and other groups throughout history, a new appreciation of Lemkin has reached a critical mass. Rutgers graduate research, publication of an autobiography, a new United Nations award in his name and even a Sundance award-winning documentary are resurrecting the Polish lawyer’s legacy.

But whether Lemkin would feel he won his crusade — if he could have stomached horror after horror in Cambodia, Bosnia, Darfur, the list goes on — is up for debate.

“Lemkin is a tragic figure — he did all this work during his lifetime, and he died penniless,” said Adassa Richardson, a Rutgers student poring over the Lemkin papers at the New York Public Library last month. “The world didn’t want to deal with it. That’s heartbreaking.”

“He was pretty much one of the greatest people of the 20th century that people don’t know about,” said Tanya Elder, senior archivist with the American Jewish Historical Society.

Lemkin was born in 1900, the son of poor Jewish farmers in southeastern Poland, near a town named Bialystok, as he recounts in his memoir. News of Armenians being killed en masse by Turks during World War I, and other nightmares throughout history, horrified and fascinated the teenager. A pogrom in his small town only reinforced the lesson that history is a “huge torture place of the innocent,” as he later recounted. 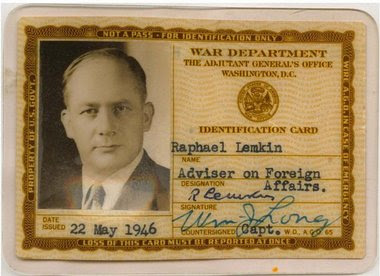 “A line, red from blood, led from the Roman arena, through the gallows of France, to the pogrom of Bialystok,” Lemkin wrote in his autobiography, “Totally Unofficial,” published for the first time last year by the Yale University Press.

Lemkin thought humanity might yet erase that red line. As a prominent Warsaw prosecutor, he used his sway to propose a measure to the 5th International Conference for the Unification of Criminal Law outlawing crimes of “barbarity” and “vandalism.” It was 1933, the same year Adolf Hitler took power. The measure was tabled.

Six years later, as the blitzkrieg raged through Poland, Lemkin made his escape: on foot, rail and boat from Sweden through Russia and Japan to the United States. In the safety of exile in 1944, Lemkin published the book “Axis Rule in Occupied Europe,” which detailed the Nazi extermination programs. In that book, he coined “genocide” — a compound of the ancient Greek word “genos,” meaning race or tribe, and the Latin word “cide,” to kill.

At Nuremberg, Lemkin served as an assistant to the U.S. prosecutor. But the convictions weren’t enough, Lemkin wrote. So he pushed the new United Nations to outlaw what he’d identified as the “crime of all crimes.” He dogged diplomats and prominent politicians around the world, playing a game of international politics detailed in his memoir.

A HISTORY OF HORROR

The cases of genocide listed below — all from the past 100 years — are generally accepted by historians to fit Raphael Lemkin’s definition of a systematic killing-off of a population or a culture through murder and other means. But there are other cases still up for debate, including the Stolen Generations in Australia, as well as massacres in Burundi, East Timor, Kosovo and the “dirty wars” in Argentina.

Some 800,000 to 1.5 million Armenians in Turkey were killed by the government. Still a hotly debated part of history, but Lemkin himself pointed to it as the first example of modern genocide.

The Nazi state in Germany systematically killed 6 million Jews, as many as 3 million Soviet POWs, and hundreds of thousands more gays, the disabled, Gypsies and others who didn’t fit their vision of racial purity.

The Khmer Rouge regime killed 2 million, as much as one-third of the country’s population, in an attempt to bring about a farming utopia. People identified with education and modernity — even those merely wearing eyeglasses — were marked for death.

About 100,000 people, mostly ethnic Bosniaks, were butchered after the breakup of the former Yugoslavia. The world was shocked when 8,000 people were killed at Srebrenica — the largest massacre in Europe since the Holocaust.

From 500,000 to 1 million people, predominantly Tutsis, were massacred by Hutu-led government forces.

Some 2.5 million civilians have been killed, as the Arab-dominated Sudanese government tried to dominate African minorities. Although southern Sudan retained independence in 2011, violence continues to this day.

After years, he succeeded in getting the Genocide Convention passed and ratified in 1951. For his work, he was short-listed for the Nobel Peace Prize twice — but he didn’t get it. His health declined, he was evicted and lost jobs, as he says in his autobiography, left unfinished at the time of his death.

“As I am devoting all my time to the Genocide Convention, I have no time to take a paying job, and consequently suffer fierce privations … poverty and starvation,” he wrote.

“There’s a moral force to his story,” said Donna-Lee Frieze, the Australian scholar now at the Center for Jewish History in New York, who edited the volume.

Lemkin’s last job was as an adjunct international law professor at Rutgers’ Newark campus, historians say. He discussed starting a center devoted to the study of genocide, Frieze said. But he didn’t live to see that happen, dropping dead of a heart attack on 42nd Street in Manhattan in 1959.

Now, however, Rutgers’ Center for the Study of Genocide and Human Rights, under director Alex Hinton, is helping to revive Lemkin as part of the “The Raphael Lemkin Project.” During an entire course this semester, the Genocide Center has hosted conferences, thumbed through Lemkin’s personal papers on field at the New York Public Library and elsewhere, and started to publish work about him. For Genocide Awareness Month, the students and staff hosted conferences on the overlooked Rutgers professor.

“We’ve always thought of ourselves as ‘The Raphael Lemkin Institute,’ ” Hinton said. “More and more people are recognizing his story — and accepting him as a hero.”

“His heart was in the right place,” said Marc Lane, a graduate student of global affairs, whose study involves looking at prosecuting different degrees of genocide. “He threw himself into his obsession — and it consumed him.”

The project conferences united academics with a surviving ancestor of Lemkin — and even those who knew him best.

Nancy Steinson, a young woman who was Lemkin’s assistant and friend during the final two years of his life, spoke at a conference this month. She remembers a man who had been worn down by his years of crusading, but who was gentle and thoughtful all the same.

“He was destitute — he was hungry,” Steinson said. “But he was so elegant.”

In addition to the Rutgers scholarship and the publication of the autobiography, a documentary about Lemkin called “Watchers of the Sky” garnered two awards at the Sundance Film Festival in January. The United Nations also unveiled a humanitarian award in December named after the Polish lawyer.

But at the unveiling of that UN award, members of the delegations from Armenia and Turkey got into a heated argument over the century-old killings of more than a million people — and whether it was genocide, according to Joseph Lemkin, a second cousin from Plainsboro who attended the ceremony.

Clearly, Lemkin’s “genocide” is still a dirty word, more than half a century after he coined it. Political realities mean that “genocide” becomes a subjective term — such as when the United States refused to call widespread killings in Rwanda in the 1990s “genocide” because it would have required intervention on the global stage.

The academics — Hinton, Frieze, the Rutgers students — all point to mass killings that return, like a chronic disease of humanity, wherever and whenever different races and religions want to eradicate one another.

“He would appreciate that international law has been improved,” said Jason Hayman, a global affairs doctoral student. “But he would have taken issue how it’s implemented and enforced. He’s probably rolling over in his grave.”

But there are reasons to hope, they add. Hinton, an expert on the Khmer Rouge regime in Cambodia, said Lemkin would have been appalled by decades of inaction. But he also would have recognized some serious improvements in prosecution and deterrence — especially in the last decade, with prosecutions of Bosnian mass killers and intervention in Darfur.

“If you look back to the 1990s, there’s a completely different landscape now,” said Hinton.

Since Lemkin’s genocide law was adopted by the international community more than 60 years ago, the killings have continued in different corners of the globe. But over the past decade or so, international tribunals have prosecuted a handful of mass murderers from Rwanda and Bosnia-Herzegovina. Meting out justice — and eventually deterring the killers — was Lemkin’s goal all along, and he knew it would take a long time to change human nature, experts said.

“I don’t think he really believed the Genocide Convention was a panacea for humankind,” said Frieze. “But he thought it was better than nothing.”