Sir Winston Churchill’s favourite Armenian brandy — said to have played a key role in the shaping of postwar Europe — has gone on sale in Britain for the first time.

The prime minister developed a taste for the ArArAt brandy when it was served by Stalin at the Yalta conference in February 1945. After the Second World War, the Soviet leader arranged for Churchill to be sent 400 bottles every year.

However, it was not available to the British public because the Soviet government only allowed a small number of spirit brands, such as Stolichnaya, to be exported. Most supplies of ArArAt were reserved for the Communist Party elite. 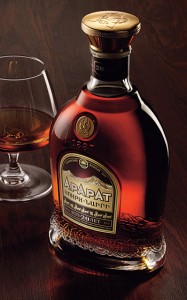 Now, more than 20 years after the collapse of the Iron Curtain, East European drinks distributor Vinorium has brought 10,000 bottles to London, to be sold from Monday in the city’s specialist wine merchants, such as

Gerry’s of Soho, priced at about £29. Vinorium’s Laszlo Puskas hopes eventually to sell ArArAt throughout Britain and Ireland if it proves a success. He said: “Everyone seems very surprised that it is finally coming to the British market. Liquor shops told us they were getting regular requests for it, but nobody knew where to get it.”

The company is also bringing other “lost” Eastern European spirit brands to Britain, including Russkaya vodka.

The brandy, which was also a favourite of Agatha Christie and Frank Sinatra, has been made in the Ararat Valley since 1887. The brand is now owned by French drinks giant Pernod Ricard.