A fresh tide of environmental protest is starting in Armenia – this time against the construction of a hydro-power plant in the Ijevan preserve. Ecologists say the construction will damage the entire eco-system of the area and will increase landslides. 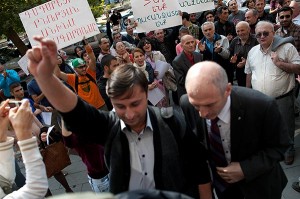 The Government had approved the construction on the Paghjur (Khachaghbyur) river in the northeastern Tavush province of Armenia. The site for the second hydro-power plant on the same river is below the Lastiver waterfall.

The Lastiver waterfall and a rare “two-storey” cave there are among the best natural sights in Armenia. The place is covered with virgin and dense forests and rich flora, while the Paghjur is famous for its trout, which is now included in the Red Book of endangered species.

“This is simply genocide against our nature, our amazing nature will become hell, as landslides already now have increased in our areas. If they go on with this construction project and the forest is logged, our villages will one day be buried,” Getahovit resident Artur Avagyan told ArmeniaNow.

Environmentalists and villagers of the 2,000-strong rural community say the construction company, Megaenergy Ltd., is acting illegally, as it has no proper documentation on the allocation of land and findings of environmental expert examinations.

Land was allotted to the company by the head of the nearby Yenokavan community only to find later that the actual construction would be in Getahovit. With a September 14 resolution the Yenokavan mayor invalidated his previous construction permit.

Meanwhile, construction continues. A group of environmentalists who were at the site two days ago say they witnessed the destruction of a large part of the “Arjatkhleni” Reserve. They say about a dozen pieces of heavy construction machinery, including bulldozers and tractors, “invaded” the reserve, uprooting rare trees known in Armenian as “Arjatkhleni” and in English as Turkish hazel (this tree is native to southeast Europe and southwest Asia).

The company’s CEO Yerem Sargsyan, who first introduced himself to the protestors as an environmentalist and only then confessed he was the constructor, gave assurances that “no tree has been cut”. He also told the green activists to “shut up”.

Teghut Defense Initiative member Artur Grigoryan said sarcastically: “Yes, they are not cutting trees, they are just uprooting them with bulldozers.”

Under the design, a three-kilometer-long pipeline is to pass through a narrow, wooded valley. It will take up to ten meters in width, which means that about 30,000 square meters of forest area will be destroyed only because of the construction of this pipe.

“We only need to understand what landslide processes will arise because of the logging of these hillside trees, this is a crime fraught with catastrophic consequences,” Trchkan civil initiative group member, geographer Levon Galstyan
told ArmeniaNow.

A positive environmental assessment, done by an affiliate of the Ministry of Nature Protection emphasizes that trees will not be cut. (The examination was conducted two months after the launch of the construction project.)

“What is called examination is just a copy-paste from other documents, only names are changed. I asked the expert if he knew there was a dense forest there and if yes, how could he write that no tree would be cut. He says he was told by the village mayor that there was no forest. The examiner never visited the place,” says Galstyan.

Deputy head of the Environmental Expertise state non-commercial organization Henrikh Grigoryan told ArmeniaNow that a proper examination was conducted in the area. “I’ll once again check, we’ll clarify things,” he added, however.

Village residents already feel the negative consequences of another hydropower plant that was constructed on the same river three years ago. This plant is owned by opposition Free Democrats Party head Khachatur Kokobelyan’s family. The residents say the river has become shallow and farmers’ agricultural fields remain without irrigation.

“We don’t have water for months, and soon we’re going to have to forget about agriculture. If another hydro is built, all villagers will just leave,” 54-year-old Getahovit resident Stephan Dallakyan tells ArmeniaNow.

Villagers say they won’t stop their fight and will go on holding protests near the Government building in Yerevan where Minister of Nature Protection Aram Harutyunyan received some of them on Thursday.

After hearing the evidence and arguments, the minister ordered setting up a commission to examine the case. He also suggested that the building company “temporarily” halt the construction.

However, this appears to be only part of a broader issue as environmentalists are concerned over government plans to encourage the construction of small hydropower plants in the country. Permissions for building as many as 70 such hydropower plants have already been issued and the total number of such facilities is expected to be around 300.

“As many as 140 small hydropower plants have already been built in Armenia, and 70 more are under construction. Still, no studies have been conducted to assess how the construction of these plants will affect their respective areas, meanwhile that could spell a disaster for the entire ecosystem,” says Ecolur NGO head Inga Zarafyan.

Environmentalists are convinced that their fight will produce a result as it happened in the case with Trchkan, another waterfall where a hydropower plant construction had been planned but was eventually foiled by environmental protests last year.