A scene from the conference

BRUSSELS—During a conference at the European Parliament in Brussels, experts and Armenian officials urged Turkey to recognize the Armenian Genocide as the only way to build a bridge for reconciliation between Armenia and Turkey to bring peace, security, stability and prosperity for the entire region.

The conference “Armenian Genocide : A Bridge for the Reconciliation of Nations” was hosted by Member of the European Parliament Dr. Eleni Theocharous in cooperation with the European Armenian Federation for Justice and Democracy and brought together round 100 participants from Europe and politicians from Armenia.

The expert debate was moderated by Theocharous from Cyprus, President of the EU-Armenia Friendship Group who welcomed the speakers and the guests. Theocharous underlined “the importance of recognizing crimes committed by humans against humanity, because only recognition brings reconciliation”.

“It’s worth pointing out that the crimes against Armenians in the Ottoman Empire happened in front of the watchful eyes of French, British, German, US diplomats in the interest of the imperialist powers. Even today, still thousands are detained in Turkish prisons without being guilty and violence against ethnic and religious minorities, Kurds, Pontios and others is still continuing because of foreign economic interests. I hope Turkey will soon recognize the Armenian genocide and avoid repeating again such crimes,” concluded Theocharous.

Avet Adonts, Ambassador of Armenia to Belgium-Luxembourg and Head of the Mission of Armenia to the European Union, said that “1.5 million Armenianswere killed simply because of their origin. The main task of the Armenian nation throughout the history has been to survive. For all the survivors, the Genocide is not a past, but a reality present in the everyday life. Therefore, the condemnation of the Genocide is a must in order to achieve rehabilitation of the historical justice,” stressed Ambassador Adonts. “Recognition of the Armenian Genocide from Turkey and the good neighboring relations between Armenia and Turkey will influence not only the two countries, but the peace, security, stability and prosperity in the whole region.”

Kaspar Karampetian, President of the European Armenian Federation for Justice and Democracy (EAFJD) thanked the members of parliament and the European Parliament for hosting the conference. Karampetian pointed out that first of all, “Armenia and Turkey are neighbors and they are predestined to live together. This is the reality which should be faced. Therefore, to recognize the Armenian Genocide and assume its responsibilities will be the only possible way for Turkey to build a bridge for reconciliation and to insure a peaceful life in the future.” 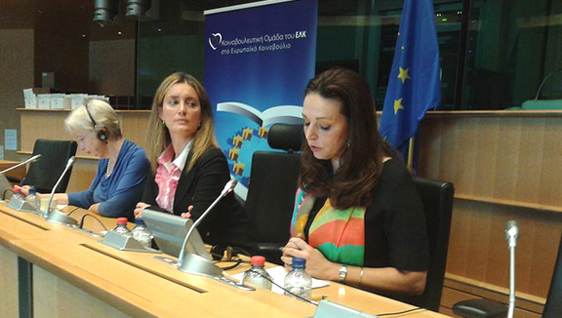 Valerie Boyer, Member of the French Parliament from Union for a Popular Movement (UMP) spoke about the bill presented by her in the National Assembly of France in 2011 to penalize the denial of the Armenian Genocide. The bill was adopted by the Parliament and the Senate of France, but has been rejected by the Constitutional Council. Boyer shared her own deception, but also her “readiness to continue to insist for penalization of the Armenian Genocide denial in the French law.”

“Me and my family, we have been victims of threats; we needed to be under police protection when the bill was adopted by the National Assembly and the Senate. But this situation shows once more the importance of the question of penalization of the Armenian Genocide denial. I submitted two new proposals for law and I am also insisting for the establishment of Investigation Committee, which will analyze the role of third countries for the rejection of the bill in France,” said the French legislator.

Boyer was also shocked by the fact that the French public disagreed with the proposal for the penalization law and she underlined the role of the French media for not covering the issue. However, the real reasons for rejecting the text—the deep relations between French and Turkish deep states and economic interests—has not been explained at the conference.

Bernard Coulie, Honorary rector of UCL (Louvain-La-Neuve) and Professor in Armenian, Georgian and Byzantine Studies, spoke as a “historian, who doesn’t offer political solutions, but brings elements for reflection and better understanding.”

Coulie described the three main characteristics of all genocides: “Particular ideology, feeling of humiliation and need for revenge and suitable context to act, which happens most often in a war situation. All these three elements were present in the Ottoman Empire at the end of 19th and the beginning of 20th century”. 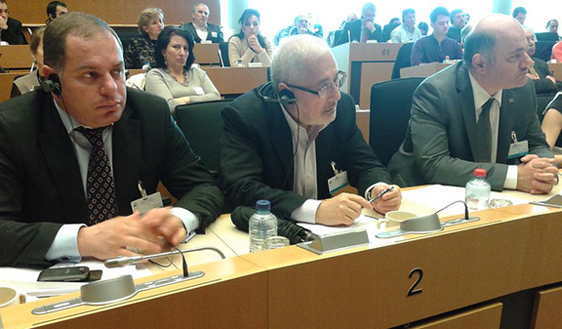 On behalf of the Armenian delegation, Armenian Revolutionary Federation bloc president Vahan Hovannesian addressed the gathering and said only through recognition and reparations can there be real reconciliation between the two countries and the entire region.