Encounters with Syrian-Armenians in Yerevan: 1970 and Today 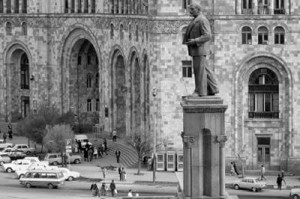 There’s talk here in Armenia about what’s going on in Syria and what this means for Armenians living there.

Open a newspaper or listen to the radio and you’ll see this and that analyst giving their take on the civil war now raging in Homs, Damascus, Aleppo and points in between.

Mostly, these commentators talk about the consequences for the community as a whole. They are billed as “Arab specialists” or “regional policy experts”.

Hearing what they have to say, I get the impression that they are closet Assad supporters. Many use the same jargon as the Assad regime in describing the situation on the ground. Nevertheless, Assad himself has now declared that there’s a civil war raging in the country.

Let me take you back to my first encounter with Armenians from Syria.

Just days before, I had landed in Soviet Armenia. I had been accepted in the preparatory course at Yerevan State University, Philology Faculty, Department of Armenian language and Literature.

At the dormitory, there were young Armenians from all over – Lebanon, Syria, Jordan, Iraq and Turkey. Even Ethiopia and India. None from Iran, however. The Cold War was still the mindset of the day and relations between the Kremlin and the Shah were still on ice.

I became friends with many “diasporans” who had come to Armenia to study at the state’s expense. They wanted to become doctors, engineers and a few, like me, wanted to immerse themselves in Armenian studies.

A few years later my career path came to a screeching halt after I was told to leave. I won’t go into the details here.

Others persevered and graduated. One such student was Alexander Attarian, an Armenia from Aleppo, Syria.

I found out what happened to him by chance in 1982 during a trip to Kessab with the Land and Culture Organization. The goal was to do some research on the Armenian community in that tiny Mediterranean seaside village.

A group of us volunteers had made a day trip to Aleppo. We were round to see some of the Armenian community institutions; the churches, clubs and schools.

It was on the street outside the AGBU Armenian School that I spotted Alexander talking to some kids dressed in their school uniforms. Eight years had passed since our last meeting in Yerevan.

We filled each other in on what had transpired in the ensuing years after Yerevan.

After graduating, Alexander returned to Aleppo and had been appointed principal of the school. He remained at the job for many years, serving the community and teaching western Armenian to new generations, until his timely death. I heard about his passing by accident as well.

40 odd years ago, Yerevan was a magnet for hundreds of young diaspora Armenians. A few remained after completing their studies. The rest returned to their homes in various Middle Eastern countries.

Civil war in Lebanon had broken out by 1975. Many Armenians fled for points far afield – Europe, the Americas, the Gulf States and Australia. Few sought refuge in Soviet Armenia.

Is history repeating itself in today’s Syria?

The Armenian communities of Lebanon, Syria, Jordan and Iraq, are shadows of their former selves. The world changes, people change. Nothing can be expected to remain the same.

In the six years I’ve been living in Armenia, I’ve had a chance to meet many former Syrian-Armenians. Long before the current troubles, they decided to relocate here and make a new start.

It hasn’t been easy, for sure, but those who have stayed on seem happy with their new lives and new surroundings. They have integrated into the local society but never fully assimilated. I believe that’s a good thing and only natural.

The new Armenia now being forged must be a melting pot of Armenians of diverse backgrounds.

Can Armenia serve as a magnet today for Armenians facing an uncertain future in Syria?

Yesterday, I read that the Ministry of the Diaspora declared that they were monitoring the plight of Armenians in Syria and pledged to assist all those who wish to relocate to Armenia.

The Ministry didn’t go into details as to what steps it and the RA government are planning to take to facilitate the integration process. Hopefully they will have learnt some valuable lessons from their recent experience dealing with Armenians from war-torn Iraq.

I have no personal grudge with the Ministry per say, but what is unacceptable is when state agencies make pledges that can’t possibly keep. It’s like when the Ministry foolishly declared that it would launch a campaign to stem the tide of mixed marriages in the diaspora. They should tone down the rhetoric and speak from a base of reality – the reality of their own capabilities and the realities of the worldwide diaspora. The Ministry would come across as much more believable.

Then too, Armavia Airlines has announced that it is resuming its weekly Aleppo-Yerevan flights after prodding from Syrian-Armenians. Great news…I guess.

I don’t know how many Syrian-Armenians are currently enrolled in colleges and universities here in Armenia. No doubt, the number pales in comparison to that of my student days.

Then again, the Armenian community in Syria has shrunk over the past 35-40 years.

I ask myself if there have been other Alexander Attarian’s who have come to Yerevan to study during the ensuing decades? Young idealists who came to Armenia with the aim of returning; to pass on their love and knowledge of Armenian language and literature to the community back home.

Probably, but their world is fading fast.

And what about the young idealists of today? Do they have a role to play in the ever changing diaspora, let alone the Armenian communities of the Middle East? One can only hope so.

The inescapable reality remains however that the Armenian communities of the Middle East, as I knew them and where Alexander Attarian fulfilled his life’s mission, cannot be duplicated anywhere else.

It is beyond me to predict how the Armenian community in Syria will emerge from the conflict now engulfing that country. Change is inevitable.

Hopefully, people of goodwill in Armenia and the wider diaspora have similar concerns and are realistically assessing what can be done to safeguard the community where possible and to provide hope to a new generation of idealists.