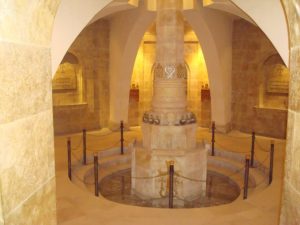 DER ZOR, Syria (A.W.)—The Armenian Genocide Martyrs Memorial Church in Der Zor, also known as the Holy Martyrs Armenian Church, has been severely damaged as a result of shelling, as revealed by video footage taken by locals and shared on YouTube today.

The lower level of the museum and memorial, where the remains of victims of the Armenian Genocide are kept, seems to be in ruins as well. It is unclear from the footage whether they were removed prior to the attacks.

Der Zor has witnessed clashes between the rebels and the Syrian Army since the beginning of the armed conflict in the country. The few Armenian families living in the city left months ago.

Hundreds of thousands of Armenian deportees were massacred in Der Zor in the summer of 1916.

The memorial was consecrated in 1991.