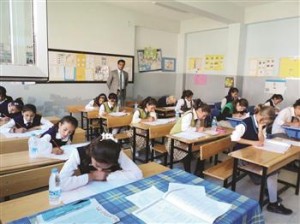 The Ministry of Education has defended a school text book that includes slurs about Armenians as well as a number of Turkish writers, saying the book was “written with the sense of national reflex and humorous criticism.”

Penned by Yunus Zeyrek, the book, titled “Bu Dosyayı Kaldırıyorum: Ermeni Meselesi” (“Closing this File: The Armenian Issue”) defines Armenians as “dishonorable and treacherous” and vilifies novelists such as Nobel Prize Laureate Orhan Pamuk and writer Elif Şafak. History and literature teachers distributed the books to students of their own volition after receiving them.

Education Minister Ömer Dinçer responded a parliamentary question proposed by Kadir Gökmen Öğüt of the opposition Republican People’s Party (CHP) about the book, saying “the examples in the book were written with the sense of national reflex and humorous criticism,” according to a report by daily Taraf.
Öğüt asked whether the ministry had approved the handing out of the book and also whether the content of the book could be considered as being a form of hate crime. In his response, Dinçer said the Ministry of Education had never recommended the book. “The Governorship of Istanbul stated that some of the books were presented to students by the District Governor of Kartal and that nobody was targeted in any chapter of the book.”