A Congressional committee adopted an amendment last month that would suspend U.S. foreign aid to any country hosting a visit by Sudanese President Omar al-Bashir. Members of Congress intend to isolate this brutal leader and help bring him to court for his crimes in Darfur.
Congress decided to take this action after several countries, including Turkey and Egypt, ignored the arrest warrant issued by the International Criminal Court in March 2009 that charged the Sudanese president with genocide, war crimes, and crimes against humanity in Darfur. In contravention of their international obligations, these countries hosted visits by al-Bashir, instead of capturing and dispatching him to the ICC for prosecution. 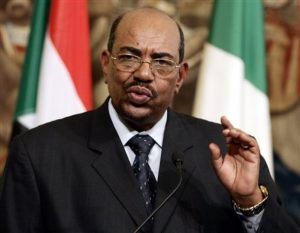 In November 2009, when he was about to visit Ankara, Amnesty International warned: “It would be a disgrace for Turkey to offer him safe haven. If the Turkish authorities fail to arrest President Omar al-Bashir and hand him over to the ICC, this would be inconsistent with Turkey’s international obligations. It would not only amount to obstruction of justice, but just as offering shelter to a fleeing bank robber constitutes a crime under national law, so, too, would sheltering a fugitive from international justice be complicity in crime.”

Four U.S. non-governmental organizations issued a joint statement in November 2009 criticizing the Obama Administration for refusing to protest the Sudanese president’s visit to Turkey. The NGO’s sought to ensure that “a wanted war criminal does not continue to travel with impunity.”

Meanwhile, the Turkish prime minister not only allowed the Sudanese president to visit Turkey, but tried to absolve him of any wrongdoing by claiming that “Muslims don’t commit genocide!” Making matters worse, Turkey continues to sell lethal weapons to Sudan, helping al-Bashir kill more innocent people.

To put an end to such irresponsible behavior by Turkey and many other countries, the House Appropriations Committee adopted on May 17, 2012, an amendment to a State Department funding bill that would cut off non-humanitarian aid to countries that do not comply with the ICC’s directive. The amendment sponsored by Cong. Frank Wolf (R-Va.) states that no economic assistance will be provided by the United States “to any country that admits President Omar al-Bashir of Sudan.”

After reports began circulating that the Obama administration was trying to block this proposed law, 70 leading Holocaust and genocide scholars signed a joint letter on June 14 urging the White House to support the Congressional amendment that would stop providing assistance to countries hosting Sudan’s president. Among the signatories of the letter are Dr. Israel Charny of Jerusalem, Dr. Irving Greenberg, former chairman of the United States Holocaust Memorial Museum, and Dr. Deborah Dwork of Clark University.

The scholars’ letter, organized by the David S. Wyman of the Institute for Holocaust Studies in Washington, D.C., was sent to presidential advisor Dr. Samantha Power, who heads the recently established Atrocities Prevention Board. The scholars reminded Power that in her Pulitzer Prize winning book A Problem from Hell: America and the Age of Genocide, she had urged the U.S. government to adopt “economic sanctions” to counter genocidal actions. Since the proposed bill “does exactly that,” the 70 signatories expressed the hope that Power and the White House would support Wolf’s amendment, particularly when it is brought up for reconciliation between the House and Senate.

It is doubtful, however, that Samantha Power will speak out in favor of this amendment. Since joining the White House staff, she has distanced herself from the issues she had boldly advocated in her book. She has also remained eerily silent on Obama’s unfulfilled pledges regarding the Armenian Genocide. Power had issued several appeals during the last presidential campaign, seeking the Armenian American community’s support for Barack Obama’s candidacy. She had solemnly pledged that Obama would acknowledge the Armenian Genocide after the election.

So far, Armenian Americans have not gotten involved in lobbying for the adoption of this important bill, most probably because they were unaware of its introduction in Congress. Armenian scholars were also left out of this issue, since no one approached them to obtain their support.

An aide to Wolf advised this writer that the Congressman would appreciate the Armenian American community’s support for this bill, which would discourage Turkey and other countries from wining and dining al-Bashir, and help bring this indicted criminal to justice.