This year’s celebration of the 22nd Anniversary of the Declaration of Independence by the Republic of Armenia became also the happy occasion to celebrate the award of a Gold Medal of the Armenian Ministry for the Diaspora to a member of the Armenian Community Council, Mr. Viken Haladjian. 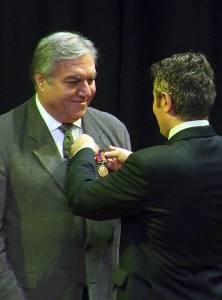 Mr Palamoudian said that in all communities, there are numerous persons who devote a lot of their time and energy to serve their community, without whom the Council and the various organisations in the community could not function, and to all of whom we must all be grateful. However, there is always the exceptional one or two who go beyond the call of duty and dedicate without reservation all their time and effort to serve their community and organise and lead community activities.  Viken Haladjian is such a person, and there was no doubt whatsoever that he deserved the Honour.

If there is any work to be done for the Council, the Community or the Church, Viken Haladjian has always been ready to take on the task without hesitation, and to deal with matters wholeheartedly and most efficiently.

Viken Haladjian was elected by the community about twelve years ago to serve as a Council Member of the ACCC.  He is Honorary Secretary of the Council, and the Council’s liaison with the Armenian Embassy in London. He is also Chairman of the Council’s Executive Committee ( Varchagan Hantznakhouump) and amongst numerous other duties he chairs the ACCC’s St Yeghiche Church Committee, the Kashadagh Committee which sends aid to Karabagh and also is a member of the ACCC’s Syrian Armenian Relief Committee and the ACCC’s Committee for Recognition of the Armenian Genocide (CRAG).

The Gold Medal was presented to Mr Haladjian by Mr Ara Margarian, the Charge d’Affaire of the Armenian Embassy in London.

Mr Palamoudian said that a few months ago, on the recommendation of the ACCC, the Ministry had awarded medals of Honour and Certificates of Commendation to the Head Teachers and a large number of the staff of the two Armenian Schools in London in appreciation of their contribution to Armenian culture and education, and the current award of a Gold Medal to Mr Haladjian was most welcome, and the Council is grateful to the Ministry for their gesture.