Leo’s Place Diner in Harvard Square has been dishing it up to locals and tourists alike for the past six decades.

CAMBRIDGE, Mass. (A.W.)—Known for its funky, artsy social culture, coupled with a modern take on traditional comfort food, Leo’s Place Diner in Harvard Square has been dishing it up to locals and tourists alike for the past six decades. 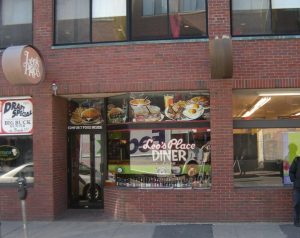 Autographed pictures of actors, musicians, politicians, athletes, and singers cover all four walls, which are liberally painted by a local artist. Old records and musical instruments donated by Boston musicians hang on a corner partition. Local CDs are played on a small stereo, laid down in a corner, for customers to enjoy over the calm atmosphere of the open-area grill and bar style seating.

Following its inception in 1949 as the first diner in Harvard Square, an abundance of replica eateries established themselves in the area. Today, Leo’s Place remains the only diner in the square, while all others have been replaced with restaurant chains, coffee shops, and cafes. The owners, brothers Raffi and Njteh (or “Ritchie” as he is known to his non-Armenian customers) Bezjian, have been running Leo’s Place for 30 years come this October. Much of the menu has been altered since they acquired the diner, but the prime dishes remain the same and the prices have hardly shifted in years.

Originally from Aleppo and Beirut, the Bezjian brothers moved to the United States during high school and began working for the previous owners of the diner, before purchasing it seven years later. They continued the tradition of homemade cooking with a friendly social atmosphere, which blossomed into a fruitful vocation of feeding future celebrities and politicians, including actor Ben Affleck and Facebook founder Mark Zuckerberg, as well as “the twins who keep suing him,” Njteh says (referring to Zuckerberg’s college roommates, the Winklevoss twins). Actor John Belushi’s “The Olympia Restaurant” skit on Saturday Night Live in 1978 was based off of the diner and set a precedent for all future restaurant parodies.

Njteh notes that people from all walks of life have dined at Leo’s Place. “People from over 180 countries have eaten here in the past 30 years.” He also stresses the greater implications of this internationality: “Even Turks come to eat here. This is important for political reasons because not even politicians can do that.” 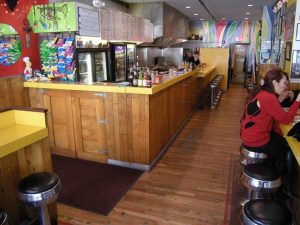 “More than 50 percent of our items are our own creations. You have to adapt to the times—you can’t be one-dimensional, especially with tourists who come here wanting a home atmosphere with their different takes on food,” Njteh tells the Weekly. Many items on the menu also pay homage to locals who either crafted the dish or order it frequently. Examples include “Click Clack’s Noise Pollution,” which is Boston radio’s Car Talk brothers’ favorite burger, and “Diego’s Salad,” named after a customer who has an appreciation for chicken in the traditional Greek salad. The meat is ordered from local butchers and the soups are always homemade. “Food trucks always stop everywhere—at all of the food places in the area—but they never come here. We don’t have any carriers or investors because everything is made by us,” explains Njteh. “This takes more time, but it is how it used to be and how it should be done,” he adds.

Open as early as 7 a.m. Monday to Friday (8 a.m. on weekends), the diner’s specialization on breakfast food is noteworthy. With nearly a dozen omelets to choose from, as well as several pancake and egg dishes, even the persnickety morning eater will find something to suit his tastes. Some of “Leo’s Specialties” include lamb kebab and broiled salmon. The steak and cheese sandwich is a lunchtime staple that locals avidly recommend to newcomers. In the wintertime, four or five soups are featured daily, and all are prepared the night before. The root beer selection is perhaps one of the largest in the area, and many are made by the staff.

Leo’s Place Diner is located in the heart of Harvard Square at 35 JFK St. in Cambridge. For more information, including reviews, visit http://www.yelp.com/biz/leos-place-cambridge.