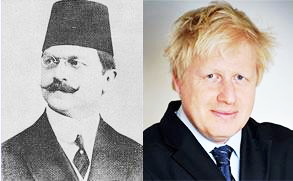 ::  The newly-appointed British Foreign Secretary, The Rt. Hon. Boris Johnson MP is famous for his tenure as mayor of London, his colorful personality, and the leader of the Brexit campaign in the June referendum. Far less known was his personal background reflecting a wide mix of the British ethnic heritage, including a Turkish ancestor, Ali Kemal, who truly distinguished himself as one of the bravest voices opposed to the leaders perpetrating the 1915-1923 Armenian Genocide and was brutally assassinated by racist forces in 1922, the Armenian Assembly of America (Assembly) reported.

In 1909, for fear of his life as a journalist, Ali Kemal fled to England in exile with his wife Winifred and his daughter. But, shortly after giving birth to a son at Bournemouth, Dorset, his wife passed away from puerperal fever. A few years later in 1912, he returned to the Ottoman Empire and married again with Sabiha Hanim, the daughter of an Ottoman pasha. Ali Kemal’s children from his first wife, still living in England, adopted their maternal grandmother’s maiden name of Johnson. Ali Kemal’s son, originally named Osman, later began to use his middle name of Wilfred as his first name, and is the grandfather of Boris Johnson.

Johnson’s great-grandfather Ali Kemal happens to be the most significant Turkish critic of the annihilationist policies of the Ottoman state. Ali Kemal was a journalist and public speaker, who even had a short stint as minister in the post-war Ottoman cabinet in 1919.

Dr. Vahakn Dadrian, whose numerous publications have revealed the breadth of German and Ottoman evidence on the Armenian Genocide, provided a compelling description of Ali Kemal’s role in Young Turk era politics. Ali Kemal was a proponent of liberal ideas that were suppressed by both the Young Turk extremists and Turkish Nationalists led by Mustafa Kemal.

Ali Kemal, with a passion unequalled by any Turk, condemned the genocide against the Armenians and inveighed against the Ittihadist chieftains as the authors of that crime, relentlessly demanding their prosecution and punishment.  In line with this attitude he campaigned also against the Kemalist movement which then was being propped up by the clandestine partisans of the defunct Ittihad. He was kidnapped from a barber shop at Tokatlyan Hotel in Istanbul, and was being carried to the Asiatic side of the city by a motor boat en route to Ankara for a trial on charges of treason. The party was intercepted, however, at Ismit by General Nureddin, then Commander of the First Army which was aligned with Mustafa Kemal. Ali Kemal was lynched by a mob set up by the General. His head was smashed by cudgels and he was stoned to death.  As described by Nureddin personally to Dr. Riza Nur, who with Ismet (Inonu) was on his way to Lausanne to negotiate peace with the Allies, “his blood-covered body was subsequently hanged with an epitaph across his chest which read, “Artin Kemal.'” Through the bestowal of an improvised Armenian name to the victim, a blue-blooded Turk, was thus administered the supreme indignity of depiction as a member of a despised nation.

Historically reviled in Turkey as a traitor, attempts were made to revisit Ali Kemal’s legacy with the rise of Boris Johnson to prominence. He was recast as a dissident and advocate of minority rights. In 2004, the Turkish Journalists’ Association listed Ali Kemal among the martyred journalists of the Republic of Turkey. That list was soon augmented by Hrant Dink, who was assassinated in 2007 for encouraging Turks to reconcile with the Armenian Genocide and whose murder investigations are still not closed because of clear official complicity. In 2011, the Turkish Journalists’ Association added 10 names of Armenian journalists who were killed in 1915, including Krikor Zohrab, a prominent writer and lawyer who was a sitting deputy in the Ottoman parliament at the time of his execution.

Ali Kemal is remembered by Armenians and mainstream historians as an extraordinary person who was truly one of the most righteous and brave Turkish notables during and after the Armenian Genocide era.

PRESS RELEASE BY THE
ARMENIAN ASSEMBLY OF AMERICA.