YEREVAN (A.W.)—The official dedication of the Assyrian Genocide memorial on Nalbandyan Street in Yerevan took place on April 25, a day after Armenians worldwide commemorated the 97thanniversary of the Armenian Genocide. The monument was unveiled in the presence of Armenian officials, representatives of various local and international Assyrian organizations, representatives of Armenian political parties, members of the press, and the public.

The gray marble monument, which stood about five-feet-tall, bore the inscription, “To the Memory of the innocent Assyrian victims of 1915.”

The dedication began with a moment of silence for the victims. Armenian-Assyrian Association Vice President Arsen Mikhaylov greeted those present first in Assyrian then, in Armenian, and thanked the attendees for their presence. He spoke about the process of bringing the project to fruition. Discussing the challenges and obstacles facing the construction, he said some objected to the design of the memorial; others to its location; and some to its construction. However, he added, what is important is that the memorial was finally completed. “We must eternalize the memory of our victims,” he said. Mickaeil thanked President Serge Sarkisian, the parliament, and the Yerevan municipality for their financial and moral support.

Calouste Sahakyan, head of the parliamentary faction of the ruling Republican Party of Armenia (RPA), said that the world has recognized this Genocide, however Real Politick has prompted many to put political considerations before truth. “The Armenian people have welcomed and supported the Assyrians… Armenia is your country, and Yerevan is your city… 7,000 Assyrians live in Armenia today,” he added. 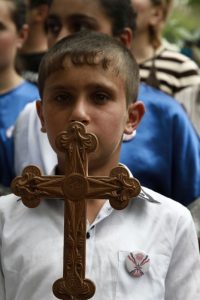 A scene from the unveiling of the monument. (Photo by Aaron Spagnolo)

Hormuz Shahedin, Deputy Secretary General of the Assyrian Universal Alliance Australian chapter, said, “[This] is a significant event in the life of our community. This memorial is a monument to Assyrians, as well as all others who have suffered.” He spoke about the massacres, the loss of a homeland, the persecution Assyrians suffered because of their Christian faith. He urged international organizations to pressure Turkey to acknowledge the Genocide. “Let us condemn these acts for what they are—Genocide,” he added.

The line of speakers was cut short due to a heavy downpour that sent many of those gathered scrambling for cover. One speaker described the heavy rainfall as the “tears of our victims.” The monument was quickly unveiled, and many rushed over to lay flowers on its step.