The Artsakh and Abkhazia teams prior to the match

This was a second match between the two teams. The first took place in September in Sukhumi and the game was tied 1 to 1.

The coach of the Abkhazia team, Djuma Kvartskhelia, said that during the prior match, the teams played very well. “It is difficult to say what the outcome will be today,” said Kvartskhelia. “Let’s hope that the teams will display true sportsmanship and will play a good game.”

The game was attended by Artsakh’s President Bako Sahakian and other high-level officials. Sahakian said that such sporting events are important both as a means to advance the sport and also to bolster relations between two friendly nations.

The Nagorno-Karabakh Athletic Club director Valery Avanessian said the stadium, which was completely renovated in 2008, is equipped to stage such games on a regular basis.

In September, the Artsakh soccer team became eligible to compete on the international arena, according to a report by Lusine Musayelyan for the RFE/RL Armenian Service.

The team’s coach Sarkis Aghajanyan said the Karabakh team will compete within the Non-Recognized States’ Soccer Association, which was established in 2003 in Liege, Belgium and works to organize friendly matches between non-recognized states. 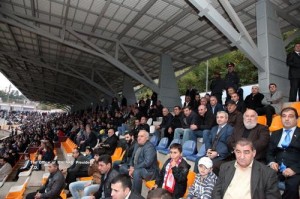 “This is one of the major steps in our post-war reality. This is our only chance to enter the international arena and stand under our national flag with our national anthem. This is already a different feeling,” said Aghajanyan referring to the Artsakh Team’s entry into the League.

The Nagorno-Karabakh Republic soccer team is financed through the state budget, which this year has an earmark of 70 million drams. This amount, according to Aghajanyan, allows the team to not fall behind on training. The team players are mainly 19- to 20-year old athletes, who, according to the coach, lack experience.

Aghajanyan reassured, however, the people of Karabakh do not like to lose.

“Although unrecognized, we now have a status that allows us to compete in matches. The entire world and the UEFA will see this,” said Aghajanyan.

Azerbaijan has impeded the participation of the Karabakh team in any competition thus far, including one against Armenia’s national team.

Until now, the Karabakh soccer team was held hostage to Soviet politics. In 1987, when the Karabakh movement had just started the Kirovabad team lost to Stepanakert 3 to 1, following which clashes took place between Armenian and Azeri team during subsequent matches. As a result, the Soviet government mandated the Stepanakert team play its home games in other Azeri regions.