President Serzh Sargsyan personally went to the airport on Monday to meet the chess players who won Armenia’s third Olympic gold, matching the result so far achieved by only two nations in the world – the non-existent Soviet Union and its legal successor Russia. 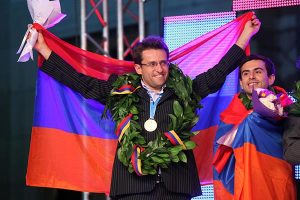 Speaking at a ceremony organized at his residence in honor of the team Sargsyan said that this latest chess victory once again shows that while Armenians can be strong individually, they can also be strong as a team.

“This is a message to all of us as to how each of us should be working in their own place,” said Sargsyan, who also heads the Armenian Chess Federation.

For their “brilliant victory” at the World Chess Olympiad and promoting the image of Armenia abroad the five members of the team and its coach received awards from the president. 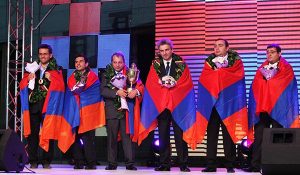 In a short return speech Aronian, speaking on behalf of the team, said they were humbled by the warm feelings towards them from the people and state officials and thanked the president personally for his support and promotion of chess.

Sargsyan, meanwhile, fatherly chided Aronian for his modesty, saying to him: “The best way for you to thank me will be winning the world champion’s title.”

Aronian, who is currently FIDE’s second best player, will engage in an eight-man tournament in London next March to decide the challenger to the reigning World Chess Champion from India, Viswanathan Anand, in the match for the chess crown later in 2013.