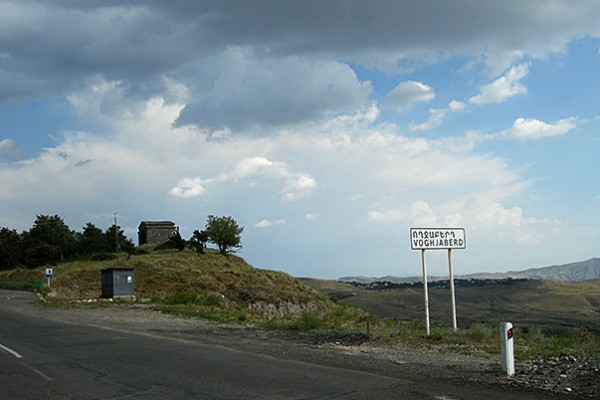 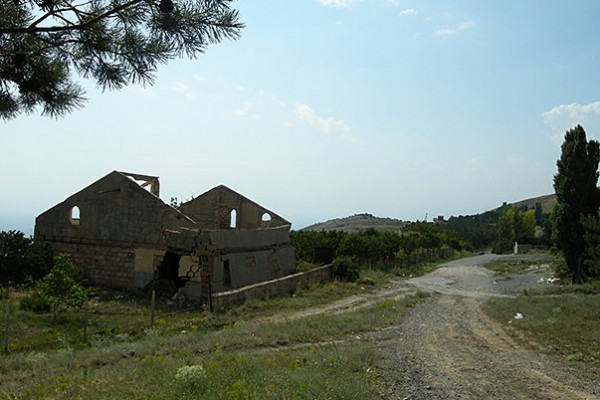 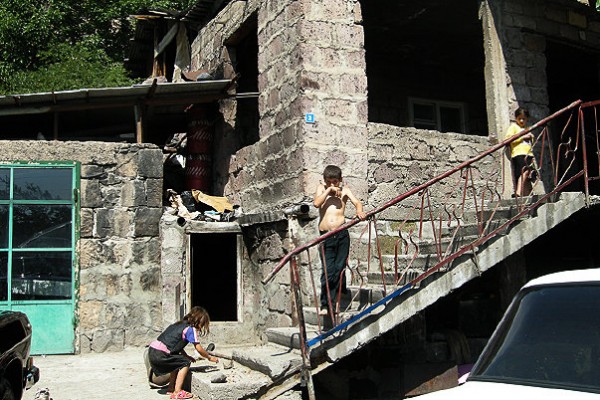 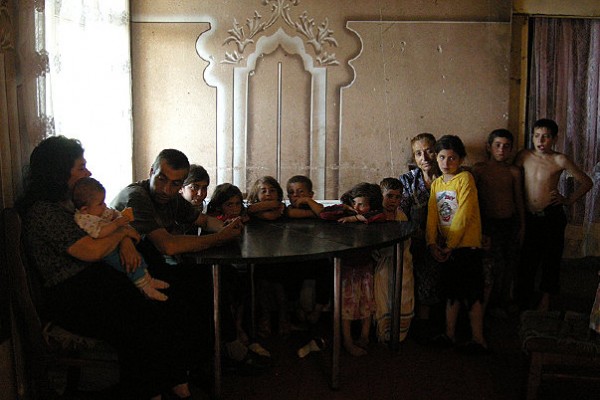 Voghjaberd is a village without much of a future. Sitting on an area subject to frequent land slippage, and at risk from rocks tumbling down from higher ground, the houses here seem destined to collapse sooner or later.

It is just a matter of time.

Home to just over 1,000 people, this village in Armenia’s central Kotayk region is among 230 settlements across the country that are located in zones prone to landslides. Voghjaberd is not particularly remote – it lies just 20 kilometres from the capital Yerevan.

All the houses in Voghjaberd are now so damaged by the ground moving underneath them that great cracks have appeared in the walls as they gradually cave in.

The slippage of land occurs at a snail’s pace, but it can be accelerated by earthquakes in this seismically active region, by the heavy rains of autumn and spring, and also by human intervention.

In Voghjaberd, the subsoil became unstable in the 1970s, coinciding with a well-intentioned project to bring water from the river Azat to supply the village.

By the late 1980s, the slippage was more pronounced, and in the early 1990s the village was listed as a landslip zone.

Hayk Baghdasaryan, a senior researcher at Armenia’s Institute of Geological Sciences who took part in a major survey conducted in 2005-06, told IWPR that Voghjaberd sat on a particularly large risk area consisting of 500 hectares of clay soil that was constantly on the move.

“Large rocks and blocks of stone have descended into the built-up area here, most probably as a result of an earthquake,” he said. “The facts show that these houses are in danger. If there’s another earthquake, the rocks could fall onto the houses.”

Voghjaberd’s community centre and kindergarten have already fallen down, and the three village schools are in such poor shape that they were abandoned eight years ago. The 82 schoolchildren in the village attend lessons in trailers instead.

After Harut Margaryan’s house collapsed, his family found themselves on the street. The village authorities offered a temporary solution by housing them in the first-aid clinic, which was in turn relocated to a trailer.

The accountant in Voghjaberd’s local government office, Haykanush Babayan, told IWPR that less than a third of the farmland around the village was still in use. The wheat fields lie fallow, and villagers live off the produce they can grow on their individual land plots. They can mow hay in the fields, but only by hand as it is forbidden to use farm machinery.

The main arterial road from Yerevan to Garni is also affected, and needs constant repairs to keep it in use.

“The highway was completely repaired a week ago, but it’s starting to disintegrate along the same section,” Babayan said. “Our village has no future.”

The authorities appear to agree. There are no long-term development projects for the village. Residents have been exempted from paying land tax, though this starves local government of funds – its income is just over 22,000 US dollars a year, just about enough to pay staff wages and help a few of the poorest families.

“It is difficult to cope with landslides,” local resident Rafik Rafaelyan said. “The experts say there’s no point fighting landslip areas as large as Voghjaberd, firstly because that would eat up large amount of money, materials and human resources with no tangible results. And secondly, the possibility that the landslip would start up again in the could never be ruled out. It is better to resettle the residents little by little, and that’s what is being done,”

Initially, those who owned their own homes were given a one-off payment of ten million drams – around 25,000 dollars – depending on the size of their properties. Other residents were given documentation allowing them to claim new housing, and four families have so far moved into new apartments elsewhere.

The resettlement and compensation process has been hampered by funding shortages. Village residents and officials have repeatedly asked central government for more assistance, only to be told that whenever funds become available, households will assessed for the risk they are at, and will then receive compensation packages according to a prioritised list.

Village head Melkonyan said about 100 houses in Voghjaberd were inhabited by young couples, but they would not be eligible for compensation as they were officially listed as living with their parents.

The selective compensation rules led to situations like that of the Avagyan family, where one married son moved away to live on a land plot bought with compensation worth 10,000 dollars. The other stayed behind in the old house, where he now lived with his family and 72-year-old mother.

Edward and Nelly Zadoyan are awaiting the birth of their 14th child in a house they fear is in great danger because it sits on the edge of the village, close to the hillside. Nelly Zadoyan recalled a massive rock which broke off from the hillside and missed their home by a miracle.

Nevertheless, Edward Zadoyan said the family was unable to move as they were not scheduled for resettlement in the near future, and there were other homes deemed to be at even greater risk.

Artur Muradyan, head of the Emergency Ministry’s department for natural disasters, explained that compensation package was paid out in two stages – 40 per cent when a family moved out of a condemned building, and the remaining 60 per cent when it was actually demolished. The idea was to stop people taking the money and going back to live in their dangerous homes.

However, Muradyan said, even this precaution was not always effective – many families had taken the first part of the money and continued to live in Voghjaberd.

Muradyan sits on a special commission set up by Armenia’s urban development ministry to look into how to deal with similar communities across the country. Although 133 settlements have been listed as requiring preventive earthworks, no funds for this were allocated in the government budgets for this year and last. Instead, the policy continues to be to move people out of high-risk buildings.

Shifts in geological structure make it especially hard to plan ahead.

“The situation changes month by month. Once the research has been carried out, money will need to be found to act on the commission’s findings,” Muradyan said. “In a few months’ time, the situation won’t be the same as it is now.”

As for Voghjaberd, villager Rafaelyan said its past was endangered as well as its future.

The local cemetery is subsiding, and he has been forced to remove his parents’ remains to another location. Some people have moved relatives’ remains to a newer cemetery, but that too lies within the landslip zone.

Christine Aghalaryan is a correspondent for the Hetq newspaper in Armenia.