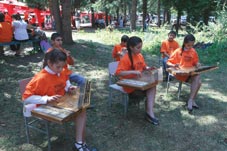 I was a member of a small Georgian delegation at the festival. The Armenian honey event was of particular interest to government representatives from the Kvemo Kartli region, who went to see how their Armenian counterparts in the Tavush region work to promote the potential of their region.

The attractions of Tavush region were in full display on Sunday: the visitors had an opportunity to enjoy local dishes made of honey and berries as well as view an exhibition of carpets and tapestries made by local craftsmen. The festival was accompanied by a variety of cultural events, including folk dancing and music performances. 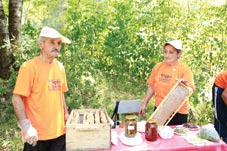 “This visit by the Georgian local government officials aim to generate double benefits,” says Mikheil Pakatsoshvili, a coordinator of the JOIN project working in the Georgian-Armenian border region. “First, it demonstrates how local government, civil society and the local community work hand in hand to promote and spur local economies – something which the Georgian officials could adopt locally. Second, even though Georgia has its own honey production, it still is an opportunity to explore market and investment potential across the border, thus enhance economic ties between the bordering regions.”

The local actorsjoin for inclusive economic development and governance in the South Caucasus (JOIN) project covers the Kvemo Kartli and Samtskhe-Javakheti regions of Georgia and the Lori, Tavush and Shirak marzes of Armenia. The project brings together civil society, local government and private sector representatives that will identify potential for economic development and attract investments to rural areas.

Local beekeepers in Tavush say that this year the honey harvest is not very big because there was hail twice in the season. If the weather is good then some of them will get about one ton of honey each year. Most of them sell their honey locally, although they hope to export soon to European markets. They plan to market their product better which will hopefully increase awareness and demand for Tavushian honey.

“The goal of our festival is to provide an opportunity to the participants and the guests to familiarize themselves with the marvelous honey and berries of the Tavush region, to stimulate development of beekeeping in the region, as well as to contribute to the development of tourism and infrastructure,” Hayk Chobanyan, Director of the Spiritual Revival of Tavush Foundation told media. 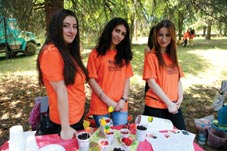 Valera Garanyan has been involved in beekeeping for 30 years and has many regular clients. He says he will be glad if the local government supports the increased distribution of local products.

“Now we have no other way to export our honey, I have a great wish to sell it abroad especially in Europe. I know they don’t have natural honey as we have here. I am sure they will like our product and its export will be successful,” Garanyan told The Messenger.

The idea was born one day when honorary consul of Norway in Armenia Timothy Straight suggested to his friends some ways of promoting the region better. “I said to my friends ‘Let’s try to start a big project to develop the region’, so now we have a development initiative which is part of a broader initiative to try to create business and tourism, bring people here and increase exports. We would like to better familiarize visitors with the Tavush region and its development potential.” he said adding that the organizers will try to make the festival an annual event which will be larger and more diverse in scope in the coming years. 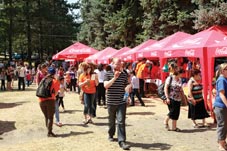 The honey and berry festival was organized by the «Spiritual Revival of Tavush» Foundation, “Serund” and “Development and Preservation of Armenian Culinary Traditions” NGOs in partnership with local government. Similar activities in Berd and other 12 municipalities will take place throughout the lifetime of the project. JOIN is financed by the Austrian Development Agency and implemented by CARE International in the Caucasus together with local partners, Civil Development Agency (CiDA) in Georgia and Center for Agribusiness and Rural Development (CARD) in Armenia.