Linda Yepoyan grew up in Pittsburgh, a city that had just 30 Armenian families and no Armenian church. She felt little cultural connection to her family’s ancestral homeland. 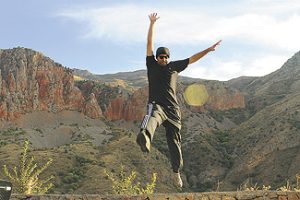 Or so she thought.

Then came the December 1988 earthquake that ravaged what was then the Soviet Republic of Armenia. More than 25,000 people were killed. The devastation was so great that the USSR formally asked the United States for humanitarian aid, for the first time since World War II.

Yepoyan, then 28 and immersed in a career in film and television, was so jarred by the images of destruction that she felt a visceral need to be there. She told her boss at HBO that she would be back in a year.

Instead, she stayed for nearly three years and married Armen Yepoyan, an Armenian. When she returned to the United States, she spent nearly a decade working for a Washington, D.C.-based organization that lobbied for humanitarian and developmental aid for the newly democratic nation, which gained independence in 1991.

The couple relocated to Wynnewood several years ago so their three children could attend an Armenian day school in Radnor.

“It was kind of an awakening experience,” Yepoyan said of her connection with Armenia, a mountainous country of 3 million people that borders Turkey, Iran, Georgia and Azerbaijan. “It makes you feel much more whole.”

If Yepoyan’s story bears some resemblance to that of countless American Jews whose lives were changed by visiting Israel, then the name of the organization she has directed since its creation in 2003 will sound really familiar: 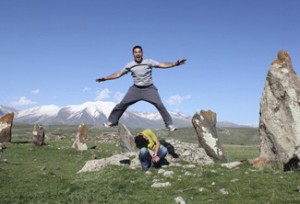 Gregory Bilazarian of Mt. Laurel, N.J., left his job as a television news reporter to do Birthright Armenia and volunteer for a news website in the capital, Yerevan.

“We are happy to share our experience,” said Barbara Aronson, chief administrative officer for the Birthright Israel Foundation, who, a decade ago, had several meetings with Yepoyan and program founder Edele Hovnanian, whose family foundation helps fund the initiative. Aronson offered information about her organization’s mission, programming and evolving educational component.

What’s officially known as Taglit-Birthright Israel has brought more than 300,000 young adults from around the world to the Jewish state since its inception in 2000. It is considered by many to be one of the most successful Jewish programs in recent decades. Birthright Armenia, by comparison, has had 600 alumni, including 26 from the area.

Birthright Israel officials have also been approached by groups in Ireland, Bulgaria and Columbia, as well as individuals from the Indian-American and African-American communities, all looking for insights on how to create and sustain similar identity-building programs.

In fact, Israel’s government, which helps support Birthright Israel, is helping to foster an exchange on these issues. Yuli Edelstein, Israel’s minister of public diplomacy and Diaspora affairs, is convening an International Conference on Diaspora-Homeland Partnerships in Jerusalem in mid-June. Yepoyan said she had hoped to attend but won’t be able to make it. She said a program staffer in Armenia would likely make the trip.

The existence of Birthright Armenia serves as a reminder that, despite their many differences, Jews and Armenians share similarities. Both are ancient peoples who suffered mass deaths in the 20th century and experienced the rebirth of ancient kingdoms as modern nation-states.

Roughly 1.5 Armenians were killed between 1915 and 1923, when the Ottoman Empire collapsed. Most scholars consider this the first case of a modern genocide, even though the term was first used in connection with the Holocaust. Turkey has long contested this view and some historians have argued that the killing did not follow a preconceived plan and therefore should not be considered genocide.

Both peoples also share a long history in Jerusalem. The Armenian Quarter in Jerusalem’s Old City has existed for hundreds of years, populated by devote Armenian Christians. The area contains several historic, religious sites and is home to more than 2,000 people.

Jews are believed to have lived in Armenia for more than 2,000 years. Several hundred Jews still live in the capital, Yerevan.

The Armenian-American poet and memoirist Peter Balakian has written about how the Jewish response to the Holocaust has served as a model to Armenians on how to spread awareness of the massacres that took place amid the instability of World War I and the breakup of the Ottoman Empire.

There are some major differences between the two Birthright programs. While Birthright Israel specializes in running short, 10-day programs that primarily hit the major highlights of the country, Birthright Armenia facilitates a longer experience that really isn’t a tour at all.

The Armenian version matches individuals ages 20 to 32 who have at least one Armenian grandparent with approved volunteer organizations spread across the nation. The stints are a minimum of two months but can last longer. The participants live with host families, take language courses, go on excursions around the country and meet with government officials. The program is not free but the organization agrees to reimburse participants’ airfare and other expenses if they meet several requirements, including gaining a basic grasp of the Armenian language.

Since the program Hovnanian and Yepoyan created is so different from the one that’s brought hundreds of thousands of young Jews to Israel, why pick a name that obviously plays off the other?

“I just loved the concept and the foresight of the Jewish leaders to think 20 years ahead,” Hovnanian said. “I am trying to mold those who will be the future leaders of the community.”

Since the program requires participants to have only one Armenian grandparent, Birthright Armenia has several alumni who’ve identified at least partially as Jews.

Among them is Gregory Bilazarian, a 28-year-old journalist from Mt. Laurel, N.J.

Bilazarian has a Jewish mother and an Armenian father. Though he attended Hebrew school, he decided at 13 to become baptized in the Armenian church. His participation in Birthright Armenia has led to more than a year’s stay in the country, where he’s now working for an online news service. He says it has changed his sense of who he is.

“Heritage is often tied to the church, maybe the language, dancing and food, and pushing for recognition of the 1915 Armenian genocide,” he said, adding that those things never spoke deeply to him. “However, as a country, I feel I have completely connected with the nation-state and its people.”

Mykil Bachoian, a 26-year-old lawyer in Los Angeles, also has a Jewish mother and Armenian father, though unlike Bilazarian, he wasn’t exposed to either culture.

“I felt like both parents should have embraced their heritage, but at the same time, I know that their marriage was not easy for either side of the family,” and that remaining neutral in terms of identity was the best way to avoid conflict, he wrote in an email response to several questions.

Not speaking the language or being connected to the church, Bachoian always felt like something of an outsider in the Armenian community. “Of course, I also had similar issues within the Jewish community, but not to the same extent,” he wrote. So many of his Jewish friends knew little Hebrew or were serious about religion so “I never felt less Jewish with them.”

As a young adult, Bachoian has sought to deepen his understanding of both cultures. In 2007, he took part in the 10-day Birthright Israel program and in 2011 went on Birthright Armenia, where he spent 10 weeks volunteering for the Armenian Young Lawyers Association.

The Israel program, he said, offered a great overview and made him want to return to Israel, which he did in 2008 through a law school program.