The Armenian National Archive has published a three-volume edition “Armenian Genocide in the Ottoman Turkey: Testimonies of the Survivors.” The book presents accounts of the witnesses, valuable archive documents, maps and photos.

In 1916 the Baku Committee of the Armenian Revolutionary Federation set up a fact-finding team to collect information about the organization and perpetration of the massacre of the Armenian population of Western Armenia.

The fact-finding team comprised Zapel Yesayan, Stepan Zoryan, Vahan Totovents, Commander Andranik and others. All the documents have been included in the “Armenian Genocide in the Ottoman Turkey: Testimonies of the Survivors” published at the initiative of the Armenian National Archive and financed by “Van” NGO.” 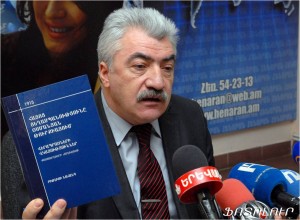 “The fact that the testimonies of the witnesses were collected just one year following the massacres ensures the authenticity and validity of the information, therefore strengthening their importance in the process of comprehensive study of the Armenian Genocide,” editor-in-chief of the publication, Director of the Armenian National Archive Amatuni Virabyan told reporters today.

The three-volume edition will be translated into Turkish, Russian and English. The proceeds from the sale will be spent on its translation. The electronic version of the publication will also be available.

Ahead of the 100th anniversary of the Armenian Genocide the National Archive will publish another book, which will include thousands of documents on the economic losses the Armenian nation has uncured.