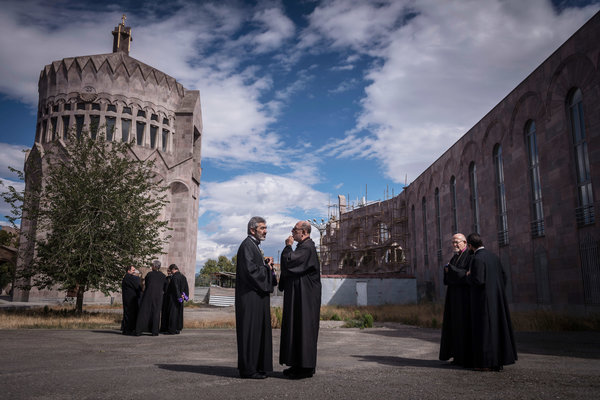 Leaders of the Armenian Apostolic Church gathered in Echmiadzin.

ECHMIADZIN, Armenia — In this ancient city, tucked in a valley that has witnessed the rise and fall of empires, King Tiridates III converted to Christianity and declared Armenia to be the world’s first Christian state. The year was 301, more than a decade before the Emperor Constantine put Rome on a similar path. 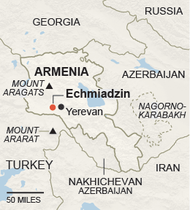 The church has endured splits and years of internal strife.

Since then, the Armenian Apostolic Church, which still has its main cathedral here, has survived conquest and dispersion, genocide, and government-imposed atheism during the years Armenia was part of the Soviet Union. It also endured centuries of internal rancor, including a split in 1441 that led to the establishment of a rival leadership now based in Lebanon.

As church leaders gathered here last week for a rare bishops’ conference, they seemed to be ready to put at least some of those differences aside as they confronted a new set of challenges: entrenched secularism at home, assimilation of followers in the large Armenian diaspora abroad and general disaffection with organized religion.

“The church is in dire need of renewal,” Catholicos Aram I, the leader of the Lebanon-based faction of the church, said in an interview as he strolled across the campus here of the Mother See. “And by renewal, I mean the church has to be responsive to the needs and expectations of the people.”

He added, “The church has to respond to the challenges of the present-day world.”

Exactly how the church plans to do that remains elusive, however, and some skeptics said the split within the church leadership remained as divisive as ever, while the number of people regularly attending church has dwindled.

The church has more than nine million adherents worldwide, most outside Armenia. Statistics show that more than 98 percent of Armenians consider themselves Christians, but only 8 percent said they attended services at least once a week — data that suggest the church is still struggling to overcome the legacy of forced atheism 23 years after Armenian independence.

There have also been a number of recent controversies, including the resignation of the head of the church in France, Archbishop Norvan Zakarian, in a dispute over demands by the church leadership to reinstate a priest facing criminal assault charges.

“The whole situation of the division of the Armenian church is not resolved,” said one Western-based archbishop who asked not to be identified to avoid exacerbating tensions. “Yes, this is a conclave, but the church is not unified.”

Aram acknowledged that he claimed the same basic title as Catholicos Karekin II, the church leader based in Echmiadzin, who also has the added designation of supreme patriarch of all Armenians. Still, Aram denied any fissure.

“We don’t have any division in the Armenian church,” he said. “We are one church. We are one people. We are one nation. We are one mission. We have two Catholicoi, and we are rich — this is an expression of the richness of the church.”

For his part, Karekin told his audience of 62 bishops in black hoods and robes with purple accents, who had come from as far away as Australia and Latin America, that it was time to come together.

“All these controversies and administrative divisions did not allow carrying out unified reforms,” Karekin said. “We are an entire century behind the opportunity to modernize the church.”

He added, “The time has come to consolidate all forces.”

To minimize the prospect of sharp disagreements at the conference, a tight agenda was adopted: creating universal practices for baptisms and confirmations, discussing the canonization of victims of the 1915 Armenian genocide in recognition of the 100th anniversary, and planning another conference next year.

In an apparent bid to generate positive publicity around the bishops’ conference, church officials billed it as the first synod of its kind in nearly 600 years — a bit of snappy marketing that was widely repeated by the Armenian news media and in a speech by President Serzh Sargsyan during the opening ceremony.

“Now, we are witnessing the epoch-making event indeed,” Mr. Sargsyan said. “For centuries, due to different circumstances, and particularly in the last six centuries, it was not possible to invite a bishops’ synod of the Armenian Church.”

Experts, however, said that was not quite true.

At the event nearly 600 years ago, a conclave in Echmiadzin in 1441, church leaders decided to move the headquarters back here from Sis, in what is now Turkey, where the Armenian kingdom of Cilicia had been conquered by Egyptian Mamluks.

Visitors lighted candles at the cathedral in Echemiadzin.

A new leader, Kirako Virapetsy, was elected to replace Catholicos Gregory IX, who was ill and remained in Sis. But when Gregory died, officials in Sis elected their own replacement.

“The year 1441 is being mentioned here and there as if to give it more importance and significance,” said Hratch Tchilingirian, an expert on the church who teaches at Oxford University’s Oriental Institute.

Mr. Tchilingirian said a bishops’ synod was held here in 1969. Armenian clerics from the United States attended, even though it was during the cold war, while those from Lebanon refused to attend.

He said that last week’s agenda seemed to ignore tough issues in favor of safe topics. For example, before the 75th anniversary of the genocide, both branches of the church issued statements about canonizing victims.

Archbishop Aris Shirvanian, the director of ecumenical and foreign relations at the Armenian Apostolic Patriarchate of Jerusalem, said that reaching an agreement to canonize victims — the first saints designated by the church since the 1500s — was a top priority.

“We, the bishops and archbishops living today, are descendants of Armenian genocide,” Archbishop Shirvanian said.

“All of us are survivors. That’s the driving spirit behind this meeting.”

Whatever the agenda, Echmiadzin, which is also called by its original name, Vagharshapat, remains at the center of Armenian spiritual life.

It is about 12 miles west of the capital, Yerevan, between the biblical mountains of Ararat and Aragats. Priests in black robes can often be seen strolling through downtown.

The conversion of Tiridates III in 301, a decade before the Roman emperor Constantine embraced Christianity, is credited to St. Gregory the Illuminator, the patriarch of the Armenian Apostolic Church.

Living in Vagharshapat, the capital of Armenia at the time, Gregory reportedly had a vision. As the faithful tell it, the skies parted and a ray of light blazed down, surrounding a group of angels and a man — Jesus — who struck the ground with a golden hammer and made an altar-shaped structure appear amid a column of fire with a cross shining above it.

It was on that spot that Gregory oversaw construction of the Cathedral of Echmiadzin — meaning, “Jesus Christ, the only begotten, descended.”