Armenia - A panoramic view of the border village of Chinari, 8Jun2012.

Life in Chinari, a village in northeastern Armenia bordering Azerbaijan, has been far from normal for two decades, and the last few days have made it even more challenging and dangerous for more than 1,000 people living there.

The mountainous settlement is located near the scene of a vicious gun battle that left three Armenian soldiers dead and several others wounded in the early hours of Monday.

The incident, which the military authorities in Yerevan say stemmed from an Azerbaijani “sabotage attack” on Armenian army positions, was followed by a series of ceasefire violations along the Armenian-Azerbaijani border and the “line of contact” around Nagorno-Karabakh. At least five Azerbaijani soldiers were shot dead at a nearby border section the following morning in what official Baku described as an Armenian commando raid.

On the face of it, it was business as usual in Chinari on Thursday. Classes continued in the village school and kindergarten, and several local men played backgammon outdoors. 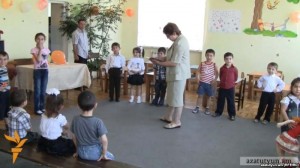 “The situation is dangerous at any time,” one of them told RFE/RL’s Armenian service (Azatutyun.am) calmly. “We can now be hit by a stray bullet while playing backgammon.”

“We have suffered for a long time and know that we must respond adequately,” he said, pointing to an Azerbaijani border outpost overlooking the village.

Cross-border shooting from Azerbaijani forces exchanging fire with Armenian troops stationed nearby has been a virtually daily occurrence ever since the Karabakh conflict degenerated into a full-scale Armenian-Azerbaijani war in 1992. Chinari has been occasionally targeted in those exchanges, including during the latest bout of fighting in the area.

“Shootouts occur on the border posts, especially at night, but, thank God, there have been no gunshots towards the village since yesterday,” said Samvel Saghoyan, the village mayor. “But there is internal tension here.”

Traces of small arms gunfire could be seen on some village houses and the local kindergarten. Its director, Parandzem Aghasian, pointed to a bullet stuck into the kindergarten façade as she showed an RFE/RL correspondent around the two-story building.

“When they fire [on the village] they usually hit the kindergarten because it’s an easy target,” Aghasian said. “But we keep going about our normal business. We are practically not scared of gunshots, they have become an ordinary thing for us.”

The kindergarten has a safety shelter where its small children take cover during border shootouts. “When we shout ‘Children, they shoot’ they immediately come here,” Aghasian said. “It’s like a habit. 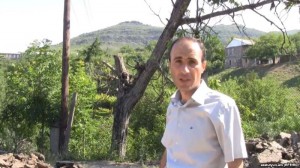 “We play music or just have them sing patriotic songs so that they don’t hear that. By the way, our children know more patriotic songs than children’s songs because they live on a battlefield.”

“We are trying to make sure that they don’t feel, hear or fear [border fighting,” added the director. “Some kids understand but others don’t know what shooting and its consequences are.”

Sonia Hovakimian, a Russian language teacher in Chinari’s school, proudly stated that classes there have never been interrupted because of border incidents. “You can hear gunshots every evening,” she told RFE/RL’s Armenian service.

Because of the unresolved conflict, a large part of the village’s agricultural land and pastures adjacent to the frontline has not been cultivated since the early 1990s. Mayor Saghoyan estimated their total area at around 700 hectares (1,730 acres). “Fearless people sometimes collect hay there for their cattle during night hours,” he said.

According to local residents, cultivating other, supposedly secure plots of land is not safe either. “It’s dangerous but we have to tend our gardens,” Gor, a young man carrying a rake, told RFE/RL’s Armenian service as he walked out of the village early in the morning.

The Armenian government has sought to mitigate this security problem with considerable infrastructure upgrades that have been carried out in Chinari in recent years. That has included the reconstruction of the local drinking water and irrigation networks and a road leading to the village. Its residents have also been given access to centralized supplies of natural gas.

For Hovakimian, the schoolteacher, that is not enough given the challenging conditions the people of Chinari live in. “We have been living under fire for twenty years,” she said. “True, we are at the center of [government] attention but we don’t get enough assistance.”